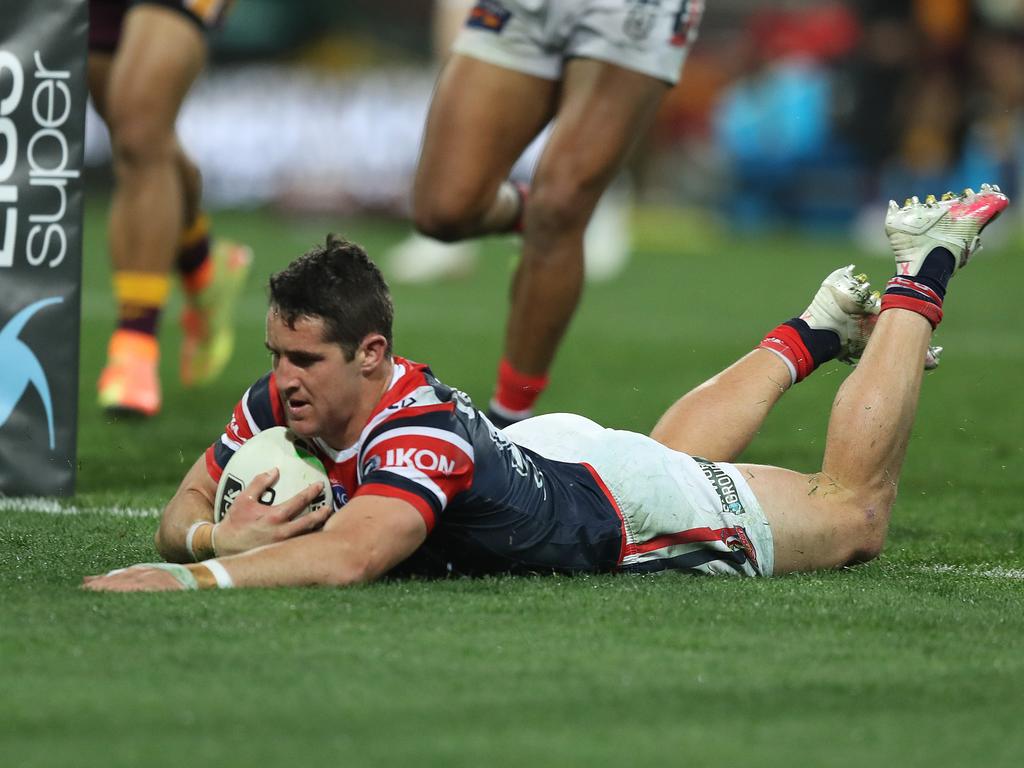 Super Saturday greets us with a fantastic slate of games, leading off with the Dragons hosting the Warriors at Netstrata Jubilee Stadium. These two sides played in round 1, with the Dragons easing by the Warriors 28-16. Given both teams’ form of late, much the same is expected in this one.

Next up, the Storm maintain their stay in Queensland, as they head to Townsville to take on the rampant Cowboys. This matchup should give us a clear sign of where the Cowboys sit compared to the big boys, and they should view this as a wonderful opportunity with the likes of Ryan Papenhuyzen, Reimis Smith and Nelson Asofa-Solomona out.

Finally, the league leading Panthers head to the SCG to take on the Roosters in the game of the round. The Roosters have looked much better the past fortnight and will look to continue their push towards the top 4 with a massive clash against the Panthers.

Draftstars has a $5000 Saturday contest with $679 to first place. The single game contests range between $6,000 and $8,000, with several other contests including the Mini, Micro, and the High Roller on offer.

Tyrell Sloan has been dropped after one game back in the top grade, with Cody Ramsey named at fullback. Josh McGuire is also out through injury, elevating Jack Gosiewski to start on an edge, and Michael Molo onto the bench in place of Gosiewski.

The Warriors have made changes to the backrow, with Euan Aitken returning to start in place of Elise Katoa, who is out. Jack Murchie has been named to start at lock, with Tohu Harris named to start on the other edge. No other changes expected.

Todd Payten has once again made no changes to his 17, and why would he, with the Cowboys on a 5-game winning streak.

The Storm have once again been forced into several changes, with halfback Jahrome Hughes named to return at halfback in place of Cooper Johns, however there are still doubts surrounding Hughes. Big man Asofa-Solomona is out through injury, with Brandon Smith named to start in his place and Dean Ieremia named on the bench. Alec McDonald returns to the bench in the only other change. There are whispers of Wishart reverting to the bench, Meaney going to fullback and Ieremia starting, so Meaney is an option this week.

For the Roosters, Victor Radley suffered a serious ankle injury and will be out for up to two months. This has seen Nat Butcher named to start at lock, and Lindsay Collins earning a spot on the bench. Brother of Tyrone May and Taylan May, Terrell May is expected to debut off the bench for the Roosters against his brother this week. Keep an eye out for him.

The Panthers have made no changes to their 17, with the only addition being Ivan Cleary, who will be back in the coach’s box after a two-week absence.

The statistics show the Warriors and Dragons matchup should be a close affair, and whilst it could prove to be, the eye test tells me something different. The Warriors over the past few weeks have looked on the brink of collapse, and with the Dragons likely inspired by the Kogarah faithful, I expect them to win comfortably.

The second matchup sees the Cowboys with a fantastic opportunity to show they are truly a top 4 worthy side. The outcome could very well depend on whether Jahrome Hughes plays or not. Without him, they really lack any help for Munster once the ball gets out from Grant. If Hughes plays, I can see a comfortable Storm win, if Hughes misses out, this will be tight.

The Roosters were my pre-season tip for the Premiership, and whilst their form this year has seen me reconsider, the past two weeks have shown some much-needed improvement for the Bondi Boys. A huge test awaits, and if they can match it with the Premiers, a third team could once again enter the Premiership conversation that for now is being dominated by the Panthers and Storm.

The call on Wishart last week didn’t quite work out, with the Panthers bombarding him all game. This week, I can see Bellamy making a change and Meaney playing fullback. With more attacking football, Meaney could see a massive increase in scoring, and with the added feature of goal kicking, is a genuine mid-level option this week.

Named to start at lock with the loss of Victor Radley, Butcher is primed to play big minutes, and with big minutes come big scores for him. In games he has played over 60 minutes, his lowest score is 40.6, and his highest 70.4. Big time upside for a cheap price, my first player picked for this Saturday’s slate.

Cleary hasn’t been at his absolute best the last few weeks, with the Panthers going down two weeks ago to the Eels, whilst last week he took a back seat to the left side in attack, led by Luai and Kikau. But this week, at the SCG, against the Roosters, I believe Cleary is ready for a big game. The good thing about betting on Cleary is that even his quiet games net you 55 points. If he can chip in some attacking stats, put him down for 65+.

Aitken seems over-priced at over $21k, given his average is 52 I believe there are better options elsewhere. Added to this, there is a chance his minutes could suffer with the return of Tohu Harris. He returns this week after missing last week through concussion, so should be refreshed, but I just believe there are better ways to spend your money with more upside.

I’ve been on the Townsend wagon for weeks, and he has been playing some incredible football. But if there’s one team that can shut a player down, it’s the Storm. I’m sure Bellamy will look to take Townsend out of this game and believe he could be in for one of his worst performances of the year. Happy for him to prove me wrong because he’s been great for the Cowboys, but I can’t buy this week.

The biggest question mark is obviously whether Hughes plays or not, however it will also be interesting to see if the injury hampers him, if he were to play. Calf injuries are not the easiest injury to deal with, and Hughes could take a backseat to others in the team if he does play. It could also affect his kicking game, meaning he could score less points than we’re used to seeing from his usual kicking game. A huge risk. 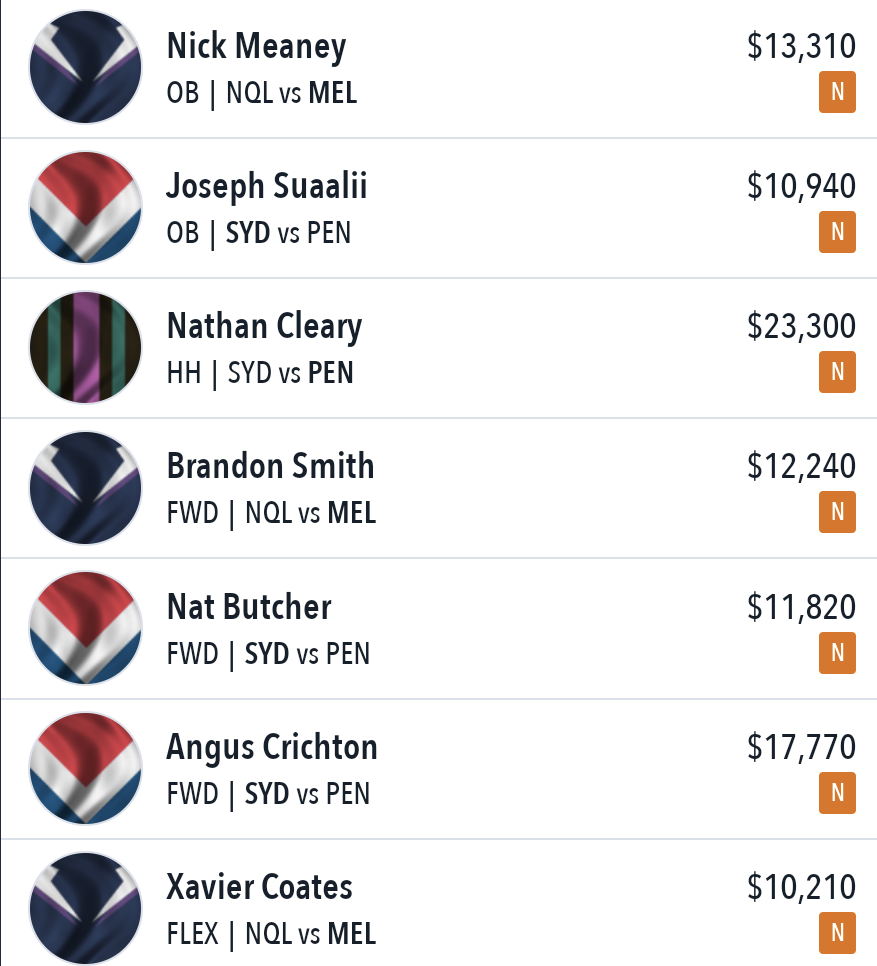