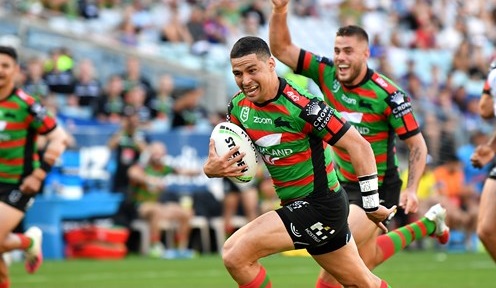 Super Saturday for Indigenous Round will see three potentially tight contests go ahead. First up, the Warriors host the Knights at Moreton Daily Stadium. With both sides struggling to keep pace with the top 8, there will be more than just a hint of desperation in this one.

At 5:30pm, the struggling Rabbitohs take on the Tigers for the second time in just over a month. Given it is Indigenous round, players like Cody Walker must be on your radar. Cody is a proud Indigenous man and always steps up during Indigenous Round. The Tigers, meanwhile, will be looking to go back-to-back against the Rabbitohs and continue their push up the ladder.

Finally in the match of the day, the Cronulla Sharks host the Sydney Roosters in a top 8 matchup that will see two teams pushing hard to be included in the top 4 conversation. The Roosters came back to reality last week, losing 32-12 to the Panthers, and will be looking to re-establish the form they showed the few weeks prior, in wins over the Eels and Titans. Should be a cracking contest.

Draftstars has a $3000 Saturday contest with $410 to first place. The single game contests range between $6,000 and $8,000, with several other contests including the Mini, Micro, and the High Roller on offer.

The Warriors are once again making changes to their spine, with Chanel Harris-Tavita returning from a ruptured testicle taking the five eighth spot of Dejarn Asi. Jazz Tevaga shows off his versatility, moving from hooker to the front row, with Freddy Lussick set to start in the 9. Addin Fonua-Blake will also miss a few weeks, being replaced in the 17 by Taniela Otukolo on the bench.

The Knights are forced into a backline reshuffle, with Bradman Best set to miss some time after a sickening elbow injury in last weeks loss to the Broncos. He will be replaced by Enari Tuala. Jake Clifford replaces Adam Clune at halfback, where he will partner Anthony Milford, who showed glimpses last week but still looks a yard or two away from full fitness. No other changes expected.

The Rabbitohs have changed the makeup of their backrow, with Jai Arrow shifting to an edge and Hame Sele named at lock. Trent Peoples has been dropped. Cam Murray has been named on an extended bench and I wouldn’t be surprised for some changes to occur before kick-off to the makeup of the forward pack. Mark Nicholls comes onto the bench, taking Peoples’ place in the 17.

The Tigers welcome back two big names, in fullback Daine Laurie and five eighth Luke Brooks. Laurie takes the place of Starford To’a, who slides to centre, with Tyrone Peachey dropped. Luke Brooks takes the place of Jock Madden, who is also dropped from the 17. Jake Simpkin also returns, dropping Jacob Liddle out of the 17. So, with three changes to the spine for the Tigers, it will be interesting to see how they gel and how the squad reacts after winning last week.

The Sharks welcome back fullback Will Kennedy, who is a straight swap for Lachlan Miller at fullback. Miller had a blistering debut last week, running for almost 300m and scoring a try. The Sharks had several injury concerns, with Talakai, Graham and Mulitalo in doubt, however they have all been named and are expected to play in this pivotal clash with the Roosters. No other changes.

The Roosters make only the one change after last week’s humbling loss to the Premiers, with Sitili Tupouniua retuning on the bench at the expense of Egan Butcher.

A massive shake up in the forward pack for the Warriors, with both Lodge and AFB out. They are coming up against a front row consisting of David Klemmer and the Saifiti boys, which on their day is one of the best front row rotations in the NRL. Klemmer has been on a tear of late, punching out solid scores and getting through a mountain of work. If the Saifiti boys can step up, the Knights will have a real chance at sneaking a win here.

The Rabbitohs will be looking for revenge in the second game on Super Saturday, after losing 23-22 to the Tigers in round 7. They have struggled since this loss and need a good performance here to keep their top 8 hopes alive. The Tigers have made 3 changes to their spine after winning last week, and on paper this will be a massive upgrade. Will it take a couple of weeks for the combinations to get back to where they were, or can they jump straight back in and click right away? I lean the Rabbitohs in this clash and expect Cody Walker to have a huge game for Indigenous Round.

In the final game, both teams will be looking to make a statement after some indifferent form over the past few rounds. With rain expected, this clash could be a battle of attrition, with the winner surely gaining more than just the 2 points for a win over a rival top 4 aspirant. The home field should be enough to get the Sharks home, however aside from last week’s insipid display against the Panthers, the Roosters have looked better over the past month. Should be a cracking game.

The Warriors’ workhorse has gradually been building his match fitness up and I believe this week he could play the full 80. Added to the fact he makes 40+ tackles and 15 runs per game, he is always a chance at an attacking statistic. With a floor around the 50-point mark and a ceiling in the 70s, for this price Harris should very much be considered this week. His price is only going up, so take advantage now.

Whilst Cody hasn’t managed to hit the heights of his past few seasons, he has shown over the past month that he is taking more control of this Souths’ side in attack. As you’d be aware having read all the above, I am high on Walker to have a huge performance for Indigenous Round. His ceiling is close to as high as anyone’s, and after a relatively poor season his price is low. First picked this week.

Premium money, but a premium buy. Cookie has really turned it on the past few weeks, averaging 78 the past two weeks. Coming into Origin, it seems as though Cook is concerned with the form of Api Koroisau, and as a result has really stepped up his involvement. With the possible addition of Cam Murray around the middle of the ruck, there should be plenty of opportunities for Cook to score some massive attacking stats.

With only 3 scores above 50 all year, I can’t get behind Aitken at this price. A chance at attacking stats, and as such has quite a high ceiling, but there are better players at the price who will score more than 35-45 without a try. With his recent signing for the Dolphins, I also wouldn’t be surprised to see Aitken’s minutes reduced.

This one could blow up in my face, however there are a couple of factors at play here. I see a low scoring battle here in wet and trying conditions. This will limit the opportunities for Tedesco to score big. Also, historically Tedesco does not do well against the Sharks, relatively speaking. With this price tag, I’m not convinced Tedesco will get you the return that is needed to be competitive. Sub 50 incoming.

Was extremely close to putting the big fella in the ‘Hate It’ category, but with his ability to completely dominate a game, I just can’t risk the egg all over my face. Since his massive game against the Sea Eagles (110.2), has scores of 33.4, 47.9, 24.5 and 21.2, for an average of 31.8. But with his upside, he could literally win you money. Coming up against Joey Manu I lean to another poor score from the tank, however who really knows. 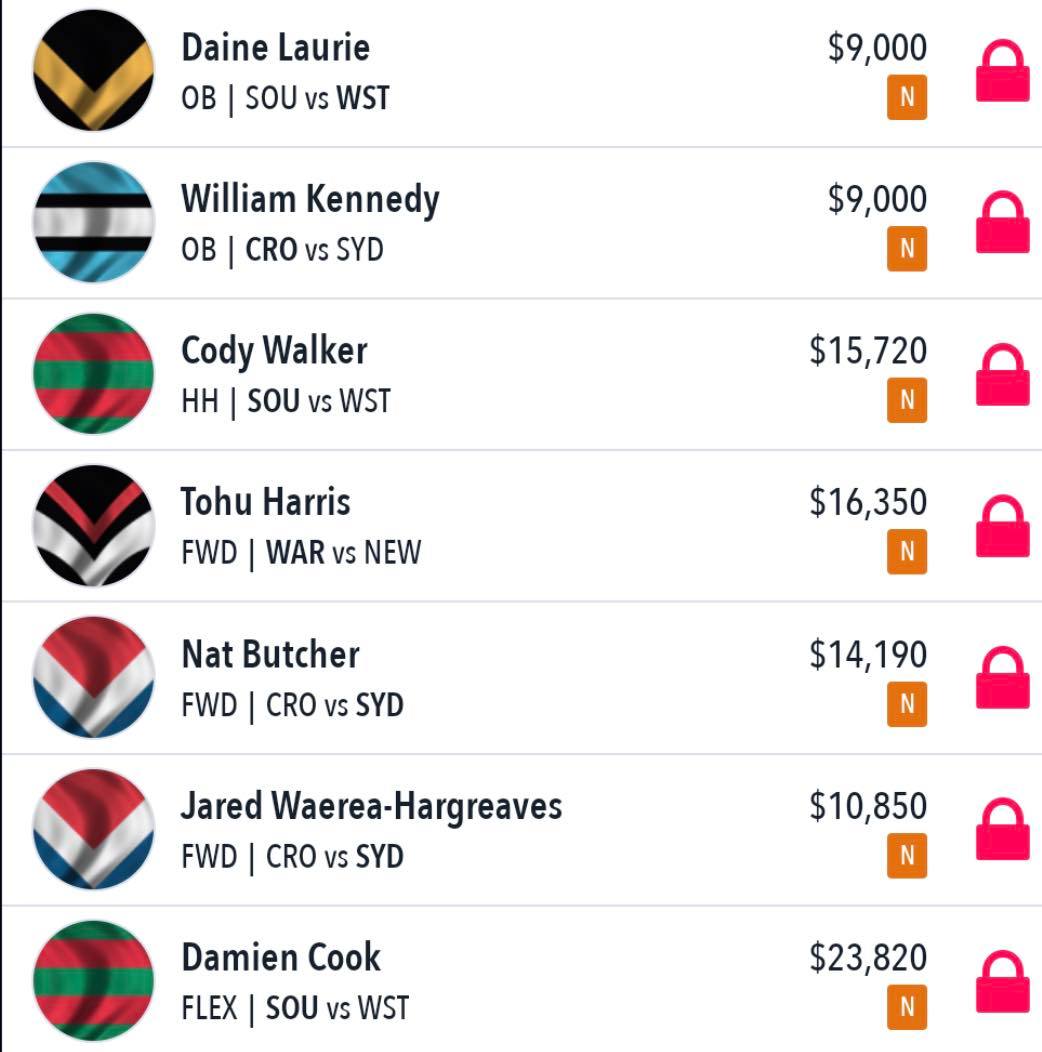