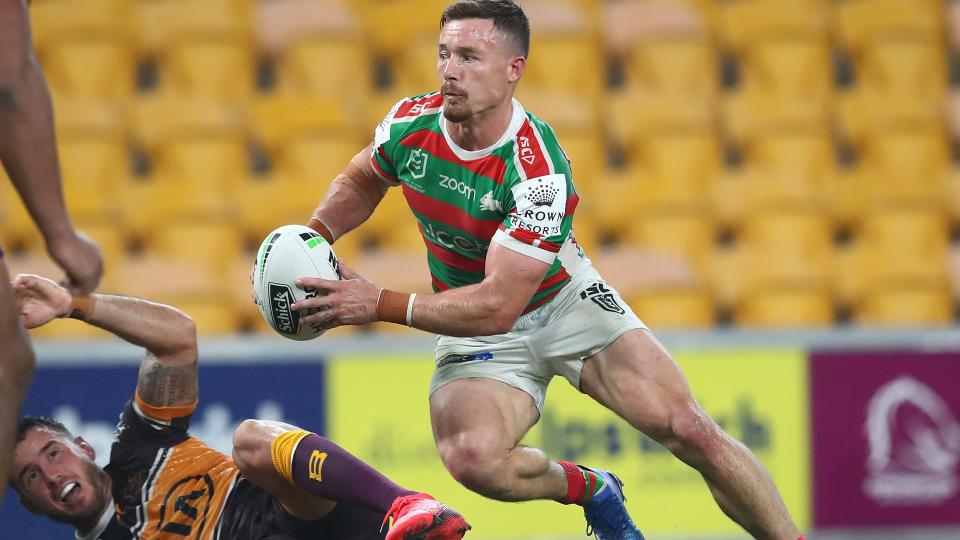 A fantastic slate of games greets us on Super Saturday for round 16, with all 6 teams coming into the weekend in decent form. We kick things off with the rejuvenated Bulldogs hosting the Sharks at CommBank Stadium. With the Sharks showing some up and down form over the past two months, do the Doggies have a realistic shot at a huge scalp this week?

Up next, the Queensland Derby, and this matchup has finals intensity written all over it. With both sides, unexpectedly, fighting towards a top 4 finish this season, this huge clash could have massive ramifications come the later rounds.

Finally, the Rabbitohs welcome back Latrell Mitchell when they host the Parramatta Eels at Accor Stadium. The Bunnies have dominated this matchup over the past two season, and desperately need a win to keep their slim top 4 aspirations alive. Eels Head Coach Brad Arthur will be looking for some consistency from his men, after losing by 30 to the Bulldogs two weeks ago, only to follow it up with a fantastic 26-16 win over the Roosters the following week.

Draftstars have a $3,000 contest for the Saturday slate, with single game contests ranging between $6,000 and $8,000. There are also several other contests including the $2 Mini and 50c Micro to jump into.

Mick Potter has unsurprisingly made no changes to the side that beat the Tigers 36-12 last week. The same change that Potter has made the past few weeks is expected to continue, with Corey Waddell starting and Raymond Faitala-Mariner benched.

One change only for the Sharks, with Andrew Fifita named on the bench, replacing Braydon Trindall. Siosifa Talakai is expected to backup, having only played 17 minutes in Origin II.

The Cowboys welcome mid-season recruit Luciano Leilua for his club debut, naming the former Tigers edge on the bench. Leilua replaces Brendan Elliott. Coen Hess has been named to start at prop, with Tom Gilbert returning on the edge. No other changes are expected, with cult figure Reuben Cotter set to miss 3-4 weeks.

The Broncos welcome back Adam Reynolds, who appears to be slowly breaking down this season, with several recent injuries. Reynolds replaces Tyrone Roberts at halfback. Payne Haas is in doubt, with ankle and shoulder injuries. If he does play, his minutes may well be limited.

The Rabbitohs welcome back Superstar Latrell Mitchell at fullback, pushing Kodi Nikorima to the bench and Blake Taafe to 18th man. In the only other change, Mark Nicholls has been named to start, with Thomas Burgess reverting to the bench.

Finally, the Eels have made no changes after their impressive display last round against the Roosters. There are whispers Ryan Matterson may miss out with a rib injury, however I expect him to play given the stakes in this game.

The form of the Bulldogs since sacking Head Coach Trent Barrett has been a revelation. Their attack appears to be playing with the freedom that the structure Barrett wanted to implement just didn’t allow. The addition of Jake Averillo to fullback has also added another attacking weapon, whilst taking out the error plagued games of Matt Dufty. With their newfound attack, they should prove a real test to the Sharks, who’s form has been wildly inconsistent this year. Both sides concede most of their tries on their right edge, so look for left side players from both sides, in a match I see ending something like 24-20 Sharks.

The Queensland derby is up next, and this has the makings of a real ‘finals feel’ match. It’s the first time in half a decade that these two teams have been towards the top of the ladder, and the winner of this gives themselves a good shot at a top 4 finish. My numbers favour the Cowboys more than the market; however, I agree more with the market. This will be a one possession game and could be relatively low scoring. In the earlier contest this year, the Cowboys hammered the Broncos at Suncorp Stadium 38-12. Of note, Nanai scored 3 tries, whilst both Holmes and Farnworth had doubles.

Finally, the Rabbitohs take on the Eels in what should be a high scoring affair. The Rabbitohs have won the past 4 clashes between the sides by an average margin of 24.5 points. Both sides love attacking down the left, so expect plenty of points down these corridors. The big drama looking ahead to this game is the expected weather in Sydney over the weekend, indicating the conditions could be tough for attacking football. Given this, we need to be somewhat conservative with our selections for games 1 and 3 today, both being played in Sydney.

Drinkwater has been a revelation this season with the Cowboys, and whilst it hasn’t necessarily correlated with massive fantasy points, he has been consistently posting scores about 60. The Broncos have shown this season that they can concede points in a hurry, and a player like Drinkwater is the type who can quickly take over a game with 2 or 3 big plays in a row. Not without risk, however for the price has decent upside.

I’ve opposed Cookie a few times recently, and each time he’s made me look foolish. He just continues to score huge points, even when his team isn’t playing well. In a game where I see the Rabbitohs offering real resistance to the Eels, Cook could be the catalyst to a massive win here for the Bunnies. Has one score under 50 in the past 12 weeks and has as high an upside as anyone.

Lane has turned into an 80-minute edge forward over the past month, and in that time, he has averaged a solid 56.4 without any tries. Playing on the left edge, is every chance of barging over for a try or 2 this week, and even without will assure you 50+ points. Minimal risk and at a nice mid-range price.

Has come out of Origin with 3 separate injuries, meaning even if he was to play this weekend, he’s every chance of either limping off early or having his minutes reduced. His output has reduced severely over the past 6 weeks, where he hasn’t scored over 60, which he was regularly passing in the early part of the year. Big price tag with huge risk, don’t buy.

McInnes has been a play for the past month or so, primarily due to the concussion issues of Dale Finucane. This has seen McInnes’ minutes increase and his role within the team change. With Finucane back last week, McInnes reverted to his earlier role, and as such his points dropped. After regularly scoring 50-65 points, he only managed 41 last week. Someone to keep an eye on if Finucane goes down again, but for now we can leave him out.

Mitchell is at an intriguing price, since when he’s at his best, he can single handedly win his team a game. The problem for Mitchell is surely his fitness, having not played since round 5 against the Dragons, a near 3-month absence. Given the allure of a Blues jersey with a huge performance, I’ve no doubt Latrell will get involved early. But how his performance will be is anyone’s guess. 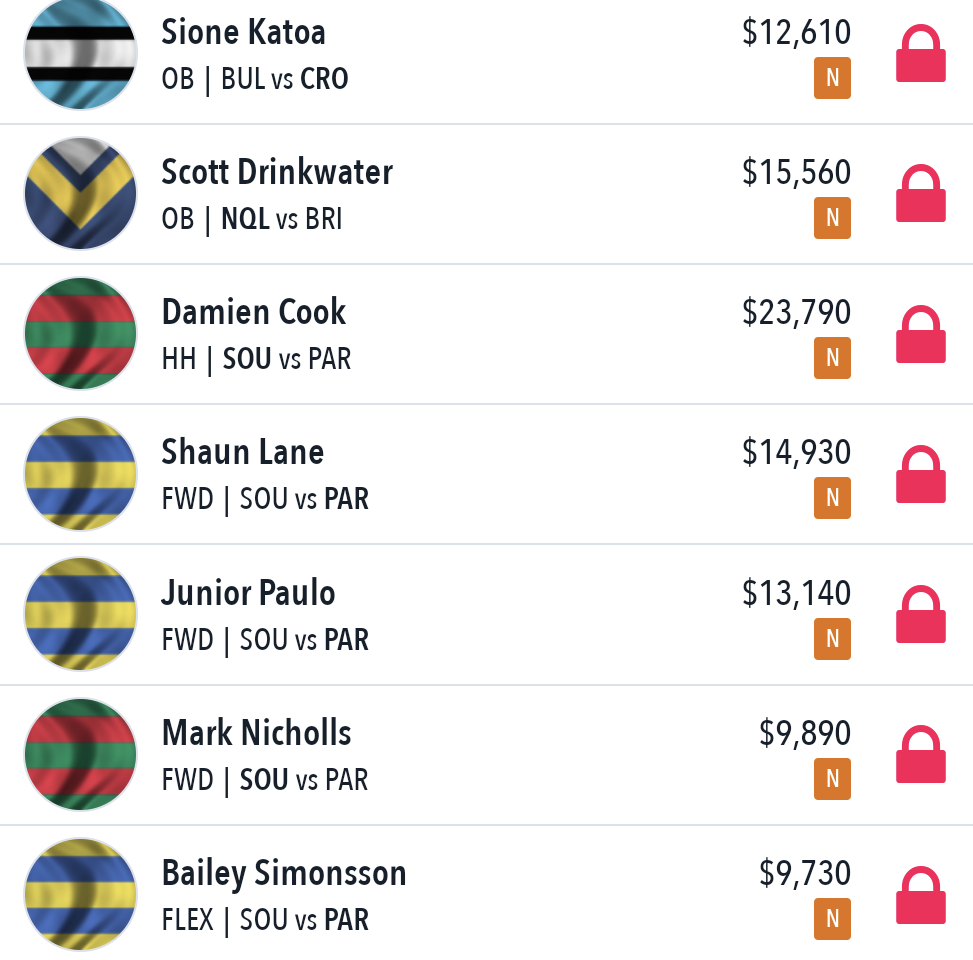