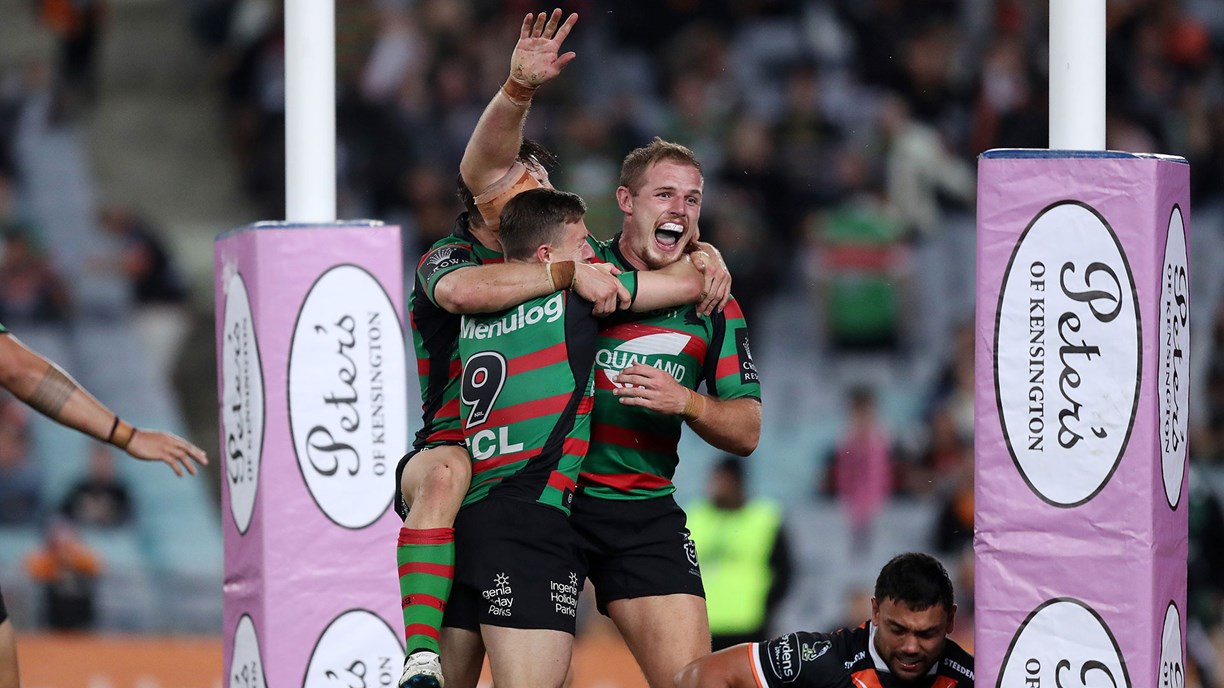 Our shortened Round 17 action (4 games) continues on Friday night with the Newcastle Knights (12th) hosting the South Sydney Rabbitohs (7th) at McDonald Jones Stadium. Both teams are hit by Origin selection and injury, but both come in with some momentum following strong wins last weekend.

Draftstars has a $15,000 contest with $1133 to first place. There are also several other contests including the Mini, Micro, and the High Roller.

There are two changes for the Knights from last week, with Dane Gagai going into Maroons camp and Simi Sasagi losing his spot on the bench. Bradman Best returns from injury in the centres, and Jayden Brailey makes his long awaited return from an achilles injury on the bench. Kalyn Ponga is kept out with Origin duty, with Tex Hoy retaining the fullback slot. Apart from the Origin reps, it’s actually close to a full strength side given Jake Clifford and Lachlan Fitzgibbon are available and continue to miss selection.

There are five changes for the Rabbitohs. All of Damien Cook, Cameron Murray and Jai Arrow are on Origin duty, while Campbell Graham and Hame Sele are out wth injury. Taane Milne returns at centre, and Jed Cartwright gets a rare start in the second row. Blake Taaffe, Davvy Moale and Michael Chee-Kam all join a strange looking bench full of utilities and low minute forwards (alongside Kodi Nikorima). Mark Nicholls is named at lock, but unlikely to play after a bad concussion. His replacement could be Dan Suluka-Fifita, who switched from the Roosters at the start of the week after getting an early release.

Despite losing several key players, the Rabbits are still big favourites on the road. This looks like a mistake to me (a biased Knights fan). The Rabbits have a weak bench, at least one unproven starting forward, a struggling rookie halfback, and a half-decent backline with an underdone Latrell Mitchell. Meanwhile the Knights supplied 8 tries to their wingers last week, and started to get some better play out of Anthony Milford. All of Frizell, Barnett, Mann and D Saifiti are getting some continuity back into their seasons, and the bench rotation is doing its job admirably. Given they’re at home, I’ll be leaning towards my Knights. Having said that, the prices are more generous on the Rabbits with more players out, so stacks in either direction are fine.

Get ready for a Rabbitohs heavy set of recommendations, they really are too cheap. I’ll start with the young centre who gets another game after a strong performance last week. He’s now had 4 appearances this season, for a solid average of 37 (one of those games was 17 minutes off the bench). It’s a small sample, but he looks to be a strong ball runner and a solid defender. If we compare him to other young centres like Koula, Timoko, Best, Penisini, Tago…and average of 35-40 is fairly reasonable in a decent team. That makes him too cheap for now and the strongest OB play.

Havili has been relishing his increased role off the bench of late, averaging 41 minutes and 43 points in his last 8 games. He’s been running the ball like a man possessed, and defending strongly. This week he moves to hooker in the absence of Cook, where his running impact will be lessened, but his minutes and defensive workload are likely to rise. I’m expecting around 60 minutes and ~45 points, which makes him a safe value at this price. It’s hard to say if his ceiling improves at all, so in a GPP it may be fine to target someone like Walker or Clune instead.

With the interesting bench makeup, it’s likely that the Rabbits starting middles will get a minutes boost. That’s a double boost for Burgess as he moves into the starting team (although he did get 59 minutes last week after Nicholls injury). There are several strong plays in this price range, with Tatola, D Saifiti and Mann all projecting similarly for value. I like the ceiling of Burgess, but he is inconsistent so sprinkle exposure throughout the group. If Nicholls plays he also looks like a strong value.

Other than Havili, the HH position is devoid of safe value plays on this slate. That usually means we can look to play anyone, but the situation at the Knights is throwing a spanner in the works for these players. It’s likely that Randall and Brailey share the hooking role this week as Brailey works his way back from a serious injury. That would see Randall get less minutes than he has this season, and Brailey get a small role int he second half. Neither will be anywhere near a ceiling score in that case, and are way too expensive. I’m less adamant about Milford as he finds some form, but at best he projects similarly to Walker and Havili for a lot more salary, so it’s hard to justify him.

I admit I didn’t watch the Rabbitohs win last week, but I’m assuming it was wet. I’m reading nothing into Mitchells solid 41 points after 11 weeks out with injury, and it’s perfectly reasonable that he could be in decent shape and ready to pump out a 50 average. The problem is, this price tag demands a 70+ score to move the needle, and I don’t think that’s on the cards in an undermanned Souths outfit. With a handful of interesting OB plays (Edrick Lee off a career best game anyone?), I’d rather spend down and use the salary for some of the more expensive forwards.

I’m always keen on a cheap starting second rower, and this is probably no different. With the makeup of the team it’s highly likely that Cartwright is asked to play the usual 65+ minutes that comes with the role (unless Chee-Kam replaces him before kickoff). The problem with Cartwright is that he is a 25 year old journeyman who’s only got a dozen underwhelming bench appearances in the last 4 seasons. I don’t think he’s very good, so I’ll project him closer to ~35 range than the 40+ that often comes with the position. That still makes him relevant at this price, where a 40+ score could be a must-have, but sub-30 is not useful. Tread carefully. 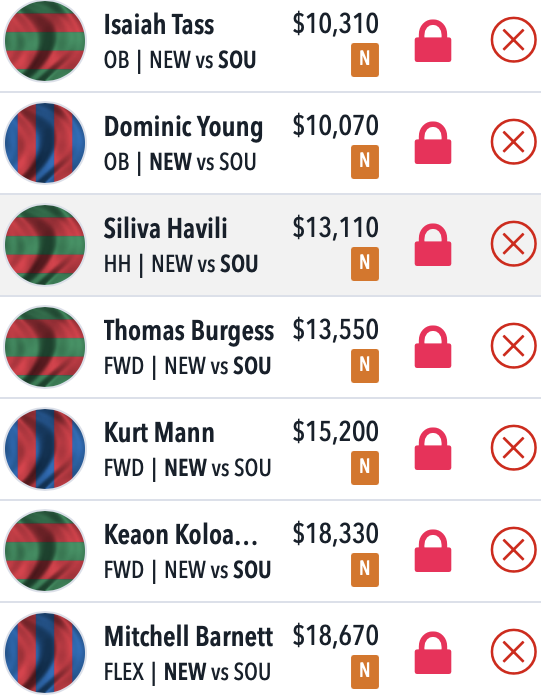