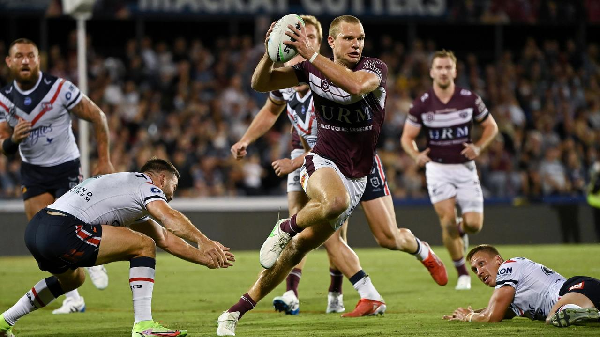 Our Round 2 Friday night double header brings us a couple of intriguing matchups. First off the St George Illawarra Dragons welcome the Penrith Panthers to Netstrata Jubilee Stadium. The Panthers showed they’re still the dominant team in the NRL last week, but the Dragons also had a strong win. Can they find a chink in the Panthers armour without Nathan Cleary? The second match is a proper blockbuster, with the Sydney Roosters taking on the Manly Sea Eagles at the Sydney Cricket Ground. Both teams suffered heavy defeats in round 1, but will still be expected to finish at the pointy end of the ladder. A 0-2 start is not what either team is looking for. No real weather issues expected in either game.

Draftstars has a $6000 Friday contest with $753 to first place. The single game contests are set at $10,000 and $15,000 respectively. There are also several other contests including the Mini, Micro, and the High Roller.

The Dragons almost got through their Round 1 win unscathed, with the lone casualty being a hamstring injury for Aaron Woods. He’s replaced in the starting team by Francis Molo, with George Burgess named to make his Dragons debut on the bench. Tyrell Sloan, Moses Suli, Jaydn Su’A and Moses Mbye all looked good in their new roles, while talented Junior Amone will need to show a little more as the halved partner for Ben Hunt.

The Panthers similarly have just the one change. Moses Leota picked up a shoulder injury, with Spencer Leniu elevated into the starting team and Matt Eisenhuth added to the bench. Young centre Izack Tago had a great start to the season last week, and Sean O’Sullivan did an impressive job trying to emulate Nathan Cleary in the halfback role.

The Roosters are unchanged from last week despite their shock loss. Jared Waerea-Hargreaves is named to start, but we may see him switch with Fletcher Baker before kickoff again. Victor Radley will have to pass concussion protocols after failing a HIA. Sam Walker and Luke Keary both looked timid last week, and will need to form a more dominant combination if they’re to link up the Roosters strong forward pack and dominant backs.

The Eagles only have one change, with Dylan Walker returning from injury to replace Tolutau Koula on the bench. That may dilute the minutes of some of the middle forwards on the team, as Walker looks to continue his roaming lock role from last season. Ethan Bullemore was solid on debut for the team, while Tom Trbojevic and Reuben Garrick in particular could not find the kind of space they thrived on last season.

The Panthers are big favourites, which is hard to argue with. Having said that, I think the Dragons might be a tad underrated, and it’s not impossible that the likes of O’Sullivan and Tago have a bit of a letdown this week. I won’t be tipping against the Panthers, but I can see the Dragons giving them a fright.

It’s very hard to split the second game, with the odds suggesting the Roosters home ground advantage might be enough to swing it. The Roosters defence couldn’t contain the Knights last week, which is probably more concerning than the similar issues Manly faced against Penrith. It’s also looking like the Keary/Walker halves combo could take a while to get going, so I’m leaning towards Manly in this one.

The Panthers fullback is int he prime of his career at 25 years of age, and he looked incredibly fit last week while surpassing 300 run metres and scoring 56 fantasy points. A couple of injuries slowed him down in 2021, but he still managed to average in the low-mid 40s depending on how you treat the injury games. At full fitness he’s a 45-50 scorer, and there is no better time to pounce than against an outclassed Dragons outfit and before the price gets too high.

There was only a handful of Manly players putting up decent fantasy scores in last weeks heavy loss to the Panthers. DCE led the way with 69 points, with his base coming from huge kick metres and being active running the ball and defending. He’s the ultimate game-script proof player, which is perfect in a game against the Roosters where it’s hard to tell which team will have the upper hand. Teammate Tom Trbojevic has a bigger ceiling, but DCE is unlikely to let us down no matter how the game pans out.

The Roosters backorder was a hot commodity last week, but only managed to scrape out 35 points in the shock loss. The biggest risk with him is always that he will be moved out of position mid-game, as he was when asked to play centre for the concussed Billy Smith. He’s not a workhorse, so often needs some attacking stats to get to a big score. That all counts against him, but I still think the price is far too good, and the ownership should be down this week also after so many were disappointed last week.

After missing 2021 with an ACL, Keary looked tentative last week. His combination with Sam Walker needs time to develop, and he still has to prove that he can consistently lead the team around the park as the dominant half. With an inflated price tag, we can still wait a while before investing in Keary, especially in a tough matchups here attacking stats might be hard to come by.

Another Rooster returning from an ACL, Collins actually has very little to prove. He’s clearly a massive talent, and will be a great fantasy play many times in the future. However, despite looking busy last week, he’ll struggle to pay off this price tag while battling for minutes in a stacked forward pack. Last weeks 48 minutes came after Victor Radley and Billy Smith failed HIAs, so I’m expecting closer to 40 minutes while he regains confidence. That’s not enough at this price.

In a Roosters heavy preview, I’m intrigued by Walker. Still only 19, he has plenty of physical development to do before he can be consistent in the NRL. Still, he’s already bigger than he was last year, he’s got the goal kicking job full-time, and he’s got more natural talent than almost anyone. That led to 5 scores of 50+ in his first 18 NRL games, and I don’t think the next one is too far away. Manly might be too tough of an assignment, but it’s worth considering at a cheap price and likely fairly low ownership.