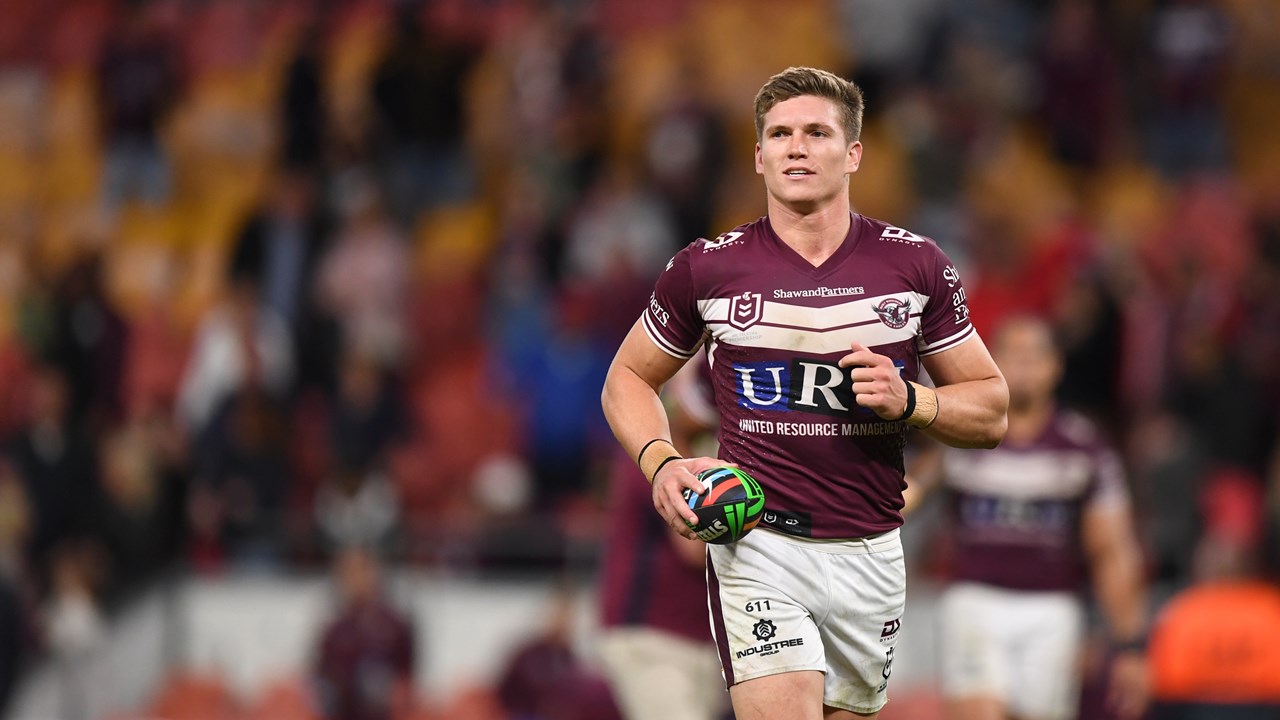 Round 3 brings us a two-game Sunday Slate which is all sorts of interesting. Things kick off with a Queensland derby, the Brisbane Broncos hosting the North Queensland Cowboys at Suncorp Stadium at 4:05pm. The 2-0 Broncos look like a new team, while the Cowboys caused a big upset over the Raiders last week by a big 22 points.

Second up is the Manly Sea Eagles welcoming the Canterbury Bulldogs to 4 Pines Park in Manly. Manly have beaten beaten convincingly by two strong opponents to start the year, while the Bulldogs are 1-1 against weaker opposition and yet to get out of first gear.

At this stage there is only change across all four teams today! So I’ll give a quick mention to some interesting things that are happening on each team instead.

The Broncos always have a lot of young talent, but the young core of the team is actually really strong wit Haas, Staggs, Farnworth, Carrigan, Turpin and Riki all under 25 years of ago. Reynolds and Capewell are the glue that can bring it all together, while there is lots of upside in youngsters like Cobbo, Niu and Robati. Billy Walters is playing great and could continue to eat further into the role of Turpin as a utility off the bench.

I wouldn’t say the Cowboys have a “young core”, but they have some players they can build around. Tabuai-Fidow, Dearden, Robson, Gilbert, Nanai, Luki and Neame all have their best footy ahead of them, and have plenty of talent. The gap between those guys and the old heads in Hiku, Townsend, McLean and Taumololo is a problem that will take a couple of years to fix. Still, plenty of young talent to take a shot at. Mitch Dunn is out with an ACL, with Reuben Cotter coming onto the bench.

Not much has changed from last year, and apart from Foran, Cherry-Evans & Taupau this is a team full of guys in their absolute prime. The form slump won’t last too long at all. Ethan Bullemor is the only inexperienced youngster in the team, and has looked a little shaky in the left edge role so far. I have faith in him long-term, so will keep treating him like any other 70+ minute second-rower for fantasy purposes.

It’s not quite clicking yet for the new-look team…but it will. Tevita Pangai Jr made his Bulldogs debut last week playing as a middle forward with Corey Waddell playing on the edge instead. I’ guessing that will continue with Luke Thompson coming off the bench. Max King is getting through an extraordinary amount of work in his 30-35 minutes, and looks to have benefited from his year at the Storm. Matt Burton is yet to have the big explosion game, but he’s going well anyway and the ceiling will be huge when it all clicks.

Both games have clear favourites, and when you zoom out the odds make sense. The Broncos are an improved team with their star veterans leading them around, and the Cowboys are an enigmatic bunch of raw youngsters and old journeyman. The Eagles are the same outfit that was top 4 last year, and the Bulldogs haven’t proven anything yet. But still, I feel like an upset is possible in both games. I’ll be employing some contrarian stacks of the Cowboys and the Bulldogs.

Garrick (and his backline teammates) represent a great chance for some bounce back fantasy goodness. After brutal matchups with the Panthers and the Roosters, everyone is doubting the Eagles. Both in real life and in fantasy they have struggled mightily…but again, those are the two most brutal defences in the NRL. Now, with a rebuilding Bulldogs team, the floodgates might burst open. Garrick averaged 50 points a game last season, which makes this price very generous if the Eagles do indeed win this one easily.

It’s a sign of just how much I believe in Matt Burton that I’m recommending him over a cheaper Adam Reynolds. The lad from Dubbo (me too!) can do absolutely everything on a footy field, and even though he’s still learning how to put it together while running a new-look team, he can handle it. With minimal attacking stats to his name in the first two weeks, Burton is still averaging 57. There is much, much more to come. The Eagles matchup could be tough, but this new-look Bulldogs team could also find a way to turn this into a good game of footy. Either way, I’m backing Burton to go 60+!

I mostly want to write about how big of a clash this could be if both of these guys turn up to play. Both are reasonably priced for their roles in the middle of the field racking up tackle breaks and offloads. Both can let us down with discipline, injury or effort on a regular basis, but their scoring prowess is elite. Like Burton, if the game gets flowing for both sides there could be plenty of points on offer.

I’d better not write up Josh Jackson again, so I’ll target another ageing Bulldogs forward who can lose out in this team. With Tevita Pangai Jr and Luke Thompson rampaging through the middle of the field, there just isn’t as much for these guys to do playing a second-fiddle role. Vaughan is still a strong player, but at an inflated price I can’t get behind him with his minutes and workload being eaten into.

I like playing Reece Robson, the guy is a good football player. But I’m so annoyed that Jake Granville continues to live on the bench and take away the dream of an 80 minute Robson. If I need an actual reason not to play him though, I just can’t see how he beats all of Burton, Reynolds, Cherry-Evans and even Marshall-King on this slate. It’s not impossible against the Broncos, but I’m willing to wait for another slate.

The Cowboys forwards had a day out in fantasy in Round 1 while losing a low scoring thriller to the Bulldogs. Then, they busted across the board in round 2 while racking up a great win over the Cowboys. Whatever is going on here, it is beyond my powers to predict how things will play out against the Broncos. All of Tom Gilbert, Jeremiah Nanai and Jason Taumololo have obvious fantasy upside if it’s a good day, and I’m even intrigued by a talented bench of Heilum Luki, Griffin Neame and Reuben Cotter who can all go large without their full whack of minutes. Gilbert is probably the pick of the lot, but the brave amongst us might find plenty of gold in this wild group from North Queensland. 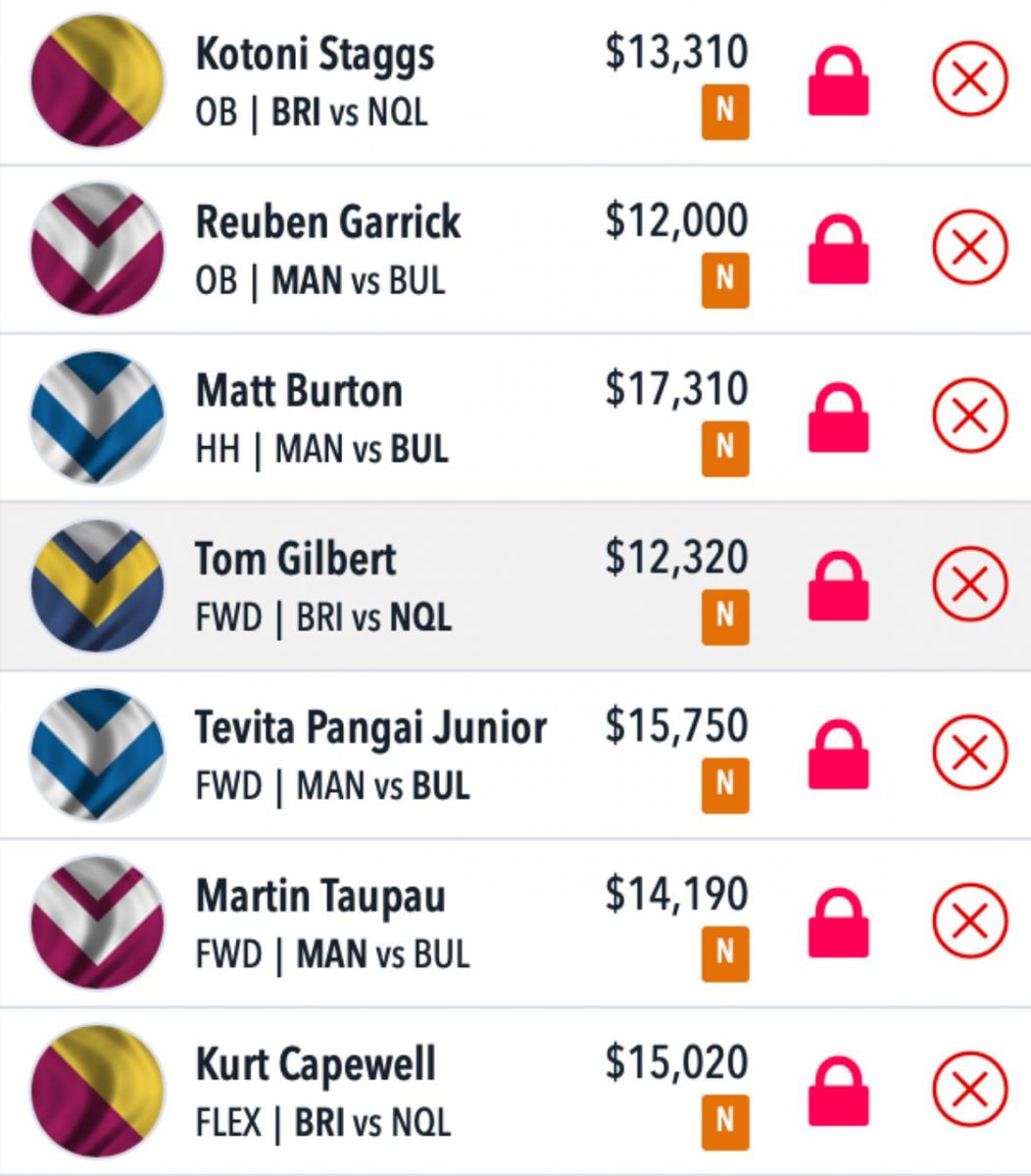