Super Saturday kicks off in Redcliffe, with the Brisbane Broncos facing off with the New Zealand Warriors, in what is a “home” game for the Warriors. The Warriors are coming off their first win of the season, a 16-12 win over the hapless Tigers, whilst the Broncos are hoping to rebound after their first loss of the season, losing 38-12 to the Cowboys.

In the 5:30pm game, we head to Mudgee where the Manly Sea Eagles will look to win their second straight, as they take on the Canberra Raiders. Manly got off the mark with their first win of the year last week against the Bulldogs and will be desperate to build some momentum heading into month 2 of the season. The Raiders have been extremely inconsistent, with their best football being top 4 worthy, and their worst being bottom of the ladder bad.

We conclude Super Saturday in Townsville in what shapes as the match of the day, where we will see the Roosters travel north to take on the surprising North Queensland Cowboys, winners of 2 straight. The Roosters have been disappointing and will surely view this game as a get right spot.

If Daily Fantasy is your game, Draftstars with contests for all 3 games separately, and a mammoth contest for the entire slate of Super Saturday. There is plenty of pools to choose from, from the recreational to the serious, paying as little as 50c to enter, and prize pools up to $10,000!

The Warriors have named a similar team as last week, with the only change being Jack Murchie coming onto the bench at the expense of Bayley Sironen, who it seems has Covid. In some positive news, Shaun Johnson is firming to play, after missing 2 weeks with a pec strain. For the Broncos, a couple of changes, with Kurt Capewell in doubt (named in reserves), with Keenan Palasia named to start in the back row, with Ryan James slated to start up front. TC Robati is also due back after missing last week, with Corey Jensen going back to the reserves.

In game 2, Manly have named an unchanged 17 from last week’s win against the Bulldogs. There are some rumours swirling of late changes, and with the Mad Scientist Des Hasler pulling the strings, I would not be shocked. The talk is Josh Aloiai will come onto the bench for Ethan Bullemor, and there are also whispers of young gun Tolutau Koula starting at centre, with Morgan Harper dropped. For the Raiders, only one change from the 17 named last week, with Nick Cotric back into the team at the expense of Sebastian Kris. I also expect Matt Frawley to start at hooker, with Tom Starling reverting to the bench.

In the final game, Todd Payten has predictably named an unchanged 17, after the Cowboys’ impressive performance in round 3. The only possible change is Coen Hess (shoulder) dropping out. If Hess is unable to go, I would expect Jamayne Taunoa-Brown to start at prop. The Roosters have only made one change to their round 3 squad, with Daniel Suluka-Fifita coming onto the bench, with Fletcher Baker ruled out. I expect Drew Hutchinson to start at hooker, with Connor Watson coming from the bench.

This promises to be a tight contest, with the Warriors being slightly underrated by the market, and the Broncos slightly overrated. Both teams have similar stats over the first 3 weeks of the season, and both teams look likely to settle into the bottom 6 teams in the NRL. Looking toward the Fantasy aspect, look for the Broncos right edge to score plenty of points. Ravalawa scored 3 tries on the right side for the Dragons in week 1, with Greg Marzhew getting a double on the right in round 2 against the Warriors. Look for the big Warrior forwards to get a roll on, with the Broncos giving up the second most metres and 3rd most post contact metres in the NRL.

In game 2, the Sea Eagles are desperate to get into a rhythm, however I don’t think they’ll have it all their own way against a Raiders team who have looked great in patches. Look for the Raiders edges to get amongst the points, with the Sea Eagles giving up a bucket load of tries to back rowers and centres on both sides of the ruck. The Raiders meanwhile have struggled on their right edge, giving up 3 tries on that side last week against the Titans. They should take plenty of encouragement from the second half last week, and I would not be surprised to see a Raiders victory in Mudgee on Saturday.

In the game of the day, the Cowboys will be live underdogs when they host the stuttering Roosters in Townsville. The Cowboys have looked very impressive the past two weeks, with their defensive numbers being absurdly imprressive. In a small sample size, they have easily been the best team defensively this season. The Roosters have struggled in attack, and if things continue to look clunky, I really do like the Cowboys to take this one. The Roosters don’t have a real weakness in giving up fantasy points, with tries being scored all over the park against them. The right edge for the Cowboys defence is probably the biggest weakness, however Peta Hiku is a great defensive centre and makes up for most of the errors from young Nanai inside him.

Staggs has struggled to get going this season, and it has not been missed by the media. Plenty of stories going around questioning the usage of Staggs and whether he is worth the coin he reportedly wants. But, as mentioned above, the Warriors left side defence has given up tries for fun this year, and with the pressure building on Staggs, I expect him to have a big game, scoring and setting up tries on the right.

CHN is the kind of player who can score points in bunches. The Sea Eagles edges have been vulnerable so far this season, so I expect the Raiders to target them frequently. Harawira-Naera is a guy who can create second phase play, break the line, and can get his teammates into try scoring situations. He is inconsistent and always a sin bin concern, but his upside is worth a crack.

Has been underwhelming this season, however, there were signs last week. 25 runs and plenty of involvement, it is obviously only a matter of time for Tommy Turbo to bust out a gigantic score. The Raiders have looked great in patches, and soft in others. Any softness will surely be exploited by Trbojevic, and I would not be surprised to see 1 try turn into 3.

Dangerous call, and it is hard to hate on Tedesco, but I like what I have seen from the Cowboys defence. Added to this, the Roosters attack has looked very clunky and there seems to be too many chefs in the kitchen. Until the halves and Tedesco gel, this Roosters attack will continue to struggle. This could blow up in my face with Teddy running riot, but the Cowboys defence is elite right now.

Ragging on two Roosters stars seems like a recipe for disaster, but Crichton seems out of favour, down on confidence and lacking in match fitness. He was benched last week and only saw 33 minutes and has been benched again this week. His price has dropped; however, it is still far too much money for what he is producing. If and when he goes back to 80 minutes on an edge, keep in your back pocket as a buy later in the season.

This kid has been in the news all week, and rightly so. In attack, he looks tremendous and has been a catalyst in the run of the Cowboys to start the season. However, he looks raw in defence, missing plenty of tackles (14), whilst also making errors regularly. His inconsistency is evidenced by his first 3 scores (56, 16, 61), which makes it extremely difficult to decide on whether to pick him. Select at your peril, as his selection could literally win you money, or ruin any chance you had. 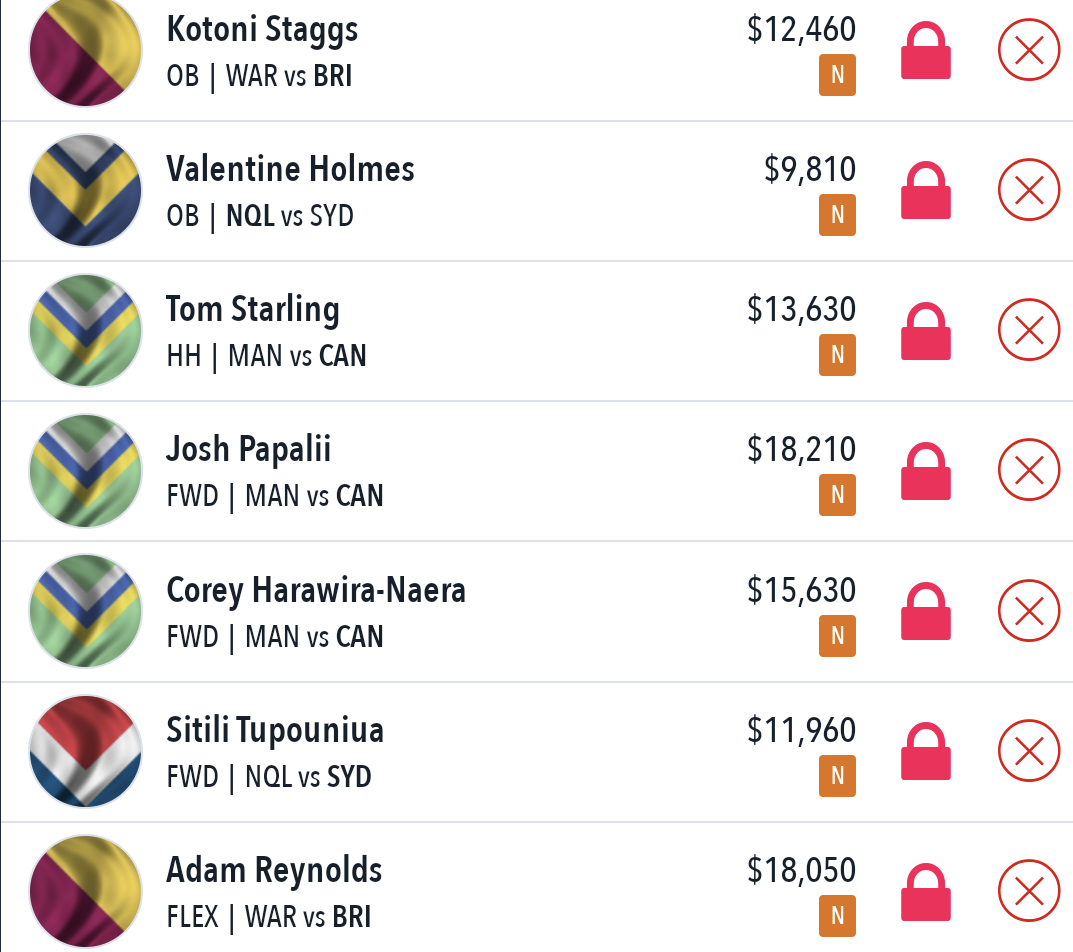