Two games on Saturday for the Easter Long Weekend of NRL action, and to be honest, the two games of the round. We kick things off with the Gold Coast Titans heading south to Brookvale, to take on the born-again Manly Sea Eagles, in a game that could feature plenty of points. Then for the night cap, we head to AAMI Park where the 2nd placed Cronulla Sharks will do battle with the Melbourne Storm. Both sides come into the contest in tremendous form, and this will be a great chance for the Sharks to show where they truly are as a team. Yes, they beat the Eels, but heading to Melbourne to take on the Storm is an entirely different beast, and I am excited to see how they go.

If Daily Fantasy is your game, Draftstars has you covered, with contests for both games separately, and a combined contest for both games on Easter Saturday. There are several pools to choose from, from the recreational to the serious, paying as little as 50c to enter, and prize pools up to $10,000!

Only one change for the Sea Eagles, with centre Morgan Harper (Covid) out, replaced by young gun Tolutau Koula. There are whispers that Martin Taupau may not play, in which case I would expect Taniela Paseka to get the start and perhaps Toafofoa Sipley coming onto the bench. For the Titans, boom fullback Jayden Campbell is missing again, meaning Jamayne Isaako retains his spot at the back. Brian Kelly returns, which sees a re-shuffle of the backline, with Sami reverting to the wing and pushing Corey Thompson out of the 17. Kevin Proctor drops off the bench, with coach Justin Holbrook opting for a 3-prop bench, with Sam Lisone taking Proctor’s spot.

In game two, the Storm have made only one change, with Alec MacDonald replaced by backup hooker Tyran Wishart. As for the Sharks, they only make the one change as well, with Royce Hunt out and Aiden Tolman back onto the bench after missing last week.

Are the Sea Eagles back, or have they just taken advantage of a soft draw over the past 3 weeks? Whilst they would have been incredibly happy to get the Turbo shaped monkey off their backs with a win last week, the Sea Eagles still have some work to do to convince me they are genuine top 4 aspirants. Whilst Daly Cherry-Evans has looked sensational over the past few weeks, I am still yet to see their forwards dominate another team through the middle of the park. The Titans forward pack is bang on average in terms of metres and post contact metres, so it will be interesting to see if the Sea Eagles forwards can manage them well.

In the main event, look for the Sharks to try and lean on their defence through the middle to give them a shot against the Storm. If the Storm get any sort of a roll on through the middle, expect the likes of Grant, Papenhuyzen and Munster to feast on the retreating defensively line. Fortunately for the Sharks, their defence is among the best in the league, allowing the least amount of post contact metres, line breaks and metres per set of any side in the competition. They are also allowing the least amount of kick return metres per game, showing this team is all about the effort plays.

This seems like a low scoring affair and could be tough for fantasy players. Look for the tried-and-true guys to get you some points, but perhaps an X-factor is needed to get you over the hump.

Ridiculously expensive, to the point of being a detriment to the rest of you team, but boy he’s been impressive. Averaging 68.6 with a low score of 65.5, you can lock him in and know you’ve got a floor of 65 every week. Pretty impressive for a halfback that cannot rely on tackles and hit-ups. The question is, can you afford him?

Has done very little this season, crossing for only the one try, but I’m picking him as my X-factor in this game. I believe with his skill and athleticism he can get the better of Siosifa Talakai on that edge of the field and get across the line for a try or two. Scored a hat-trick against the Sharks last year at AAMI Park in round 8, and what do you know, he was taking on a Shark 2nd rower turned centre (Teig Wilton).

Papi was average last week, but it is rare to see him go two games straight without much involvement. Like Smith above, had a hat trick last season against the Sharks, and with this being a tight game through the middle, expect a Papenhuyzen run to break the game open in the second half.

Sexton looked good in the opening couple of rounds, but he, along with the Titans, have come crashing back down to earth since half time in round 3 against the Raiders. He will get you 30-45 and be perfectly fine, but for that price you need someone with more upside, and I believe he is a waste of a sizeable chunk of your salary cap. With so many good halves/hookers to pick from this Saturday, he is a no for me.

Hard to say hate it and Jake Trbojevic in the same sentence, but his workload just has not got the job done recently in fantasy. He is being used far too much as a facilitator, and his tackle numbers have also dropped over the past 3 weeks. Whilst this has no doubt coincided with the Sea Eagles seeing more possession, the fact Trbojevic seems to be tackling less and running less makes him a no go for me.

Should just be this guy every week. I mean, who the hell knows? In one run last week Fifita showed how destructive he can be, but why has it taken 5 rounds to show it? Has he been carrying a niggle? Are the Titans using him differently? Who the hell knows? All I will say is if you spend up big on Fifita, prepare to yell at your TV 20 odd times throughout the game, as the games most destructive runner turns into the game’s biggest decoy. 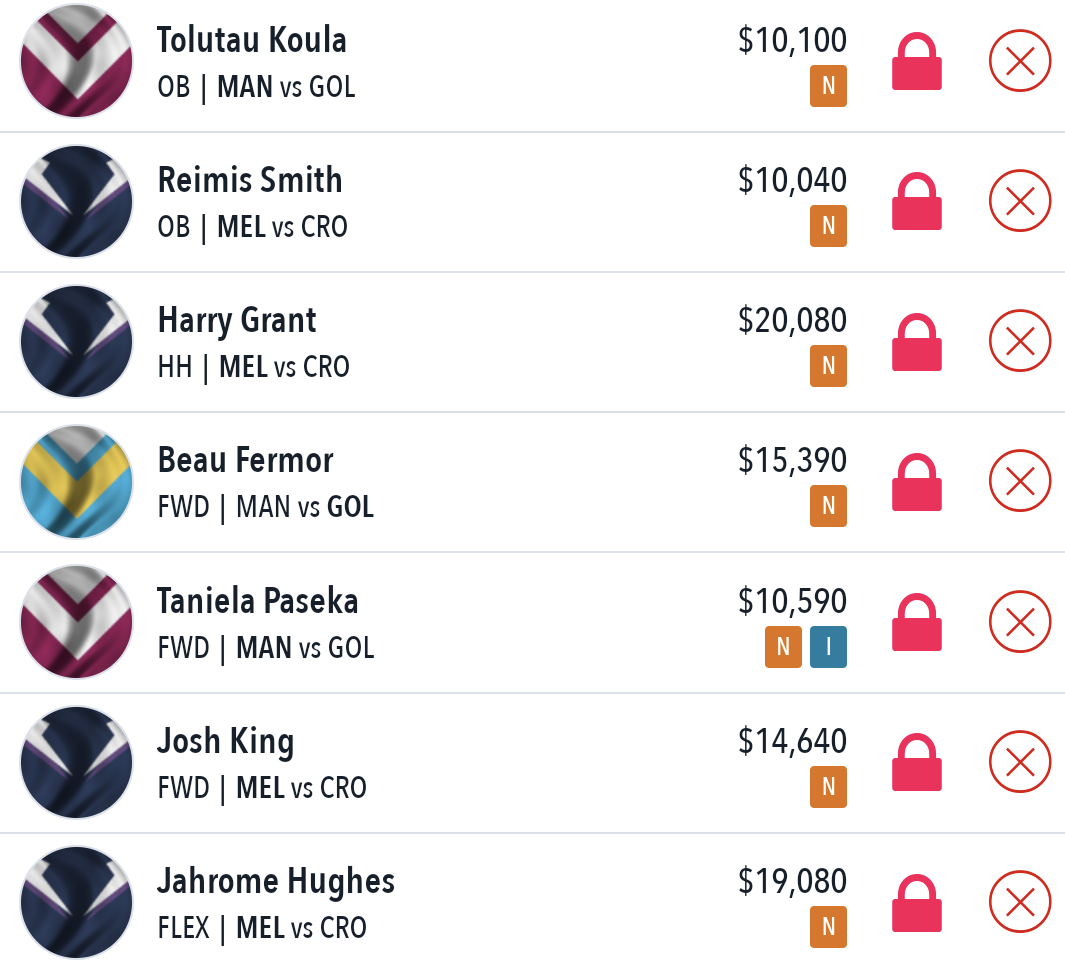