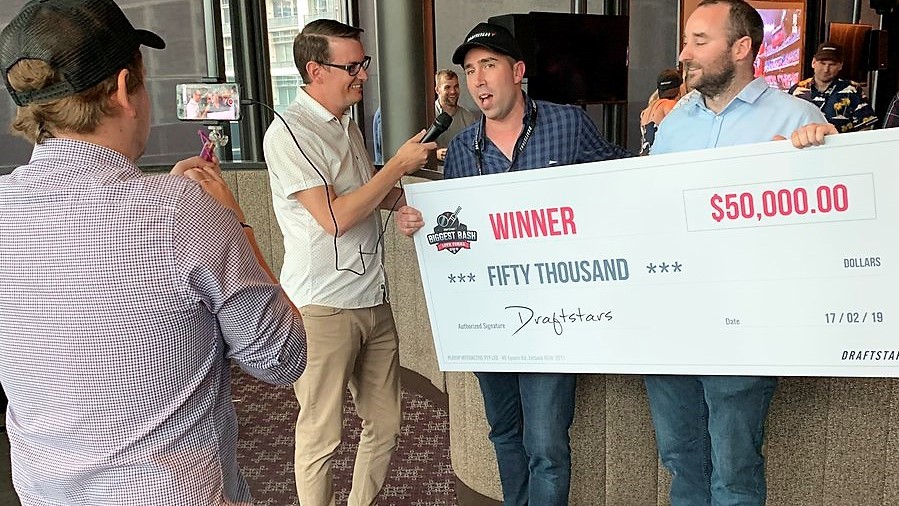 DFS Down Under Episode #3 The Biggest Bash Review

Join Luke “Smatho10” Mathyssen and Tristan “BigHef” Heffernan for Episode 3 of the “DFS Down Under” show, where they look back at the huge Biggest Bash Live Final, discuss our new AFLW resources section and look at the upcoming AFL JLT series from both a DFS and season-long AFL Fantasy/Supercoach perspective!

The Draftstars Biggest Bash has been the talk of Australian DFS throughout the BBL08 season and it culminated at Melbourne’s Crown Casino on Sunday with the $150,000 Live Final! With the biggest first prize in Australian DFS history of $50,000 up for grabs, around 150 qualifiers and their guests converged on Club 23 and were greeted with an amazing array of food, drinks and great entertainment. The nature of fantasy cricket meant the leaderboard saw many different names near the top throughout the day but after an insane batting collapse by the Melbourne Stars which saw the Melbourne Renegades take home the title, it was local father-of-three “Richozzz” who sat atop the leaderboard at the end of proceedings!

Check out the moment when “Richozzz’ was crowned as the champion of the “Biggest Bash” and received the heavyweight belt and the huge novelty cheque!

Our man on the ground, “Roving Smatho” Luke Mathyssen caught up with “Richozzz” straight after his big win and while it was yet to sink in, he gave us a great insight into the excitement and magnitude of what he had just achieved:

Brett Lee was the special guest of Draftstars on the day and was more than happy to jump on the microphone and get involved with all the excitement. He caught up with our man AJ for a most interesting chat at a crucial time in the game which saw him change his prediction on the fly!

As the day was winding down, there was one question on everyone’s lips – when are we going to get the chance to do it all again? AJ caught up with Draftstars Operations Manager Scott Simic earlier in the day and he had some very interesting things to say about their future plans, especially looking forward to the AFL Season:

The action didn’t stop there - on our Daily Fantasy Rankings YouTube channel you can see more interviews from the day, including an introduction with Smatho, his catch up with our regular NBA writer Jesse Penfold, as well as a chat between AJ and the main man behind the scenes Erik Harris from Draftstars.

With a stack of video content on the way this year, please make sure you hit “Subscribe” on our channel so you don’t miss any of the action and please give us your thoughts on what you’d like to see throughout the year!

From all of us here at Daily Fantasy Rankings, it’s a massive well done to the team at Draftstars for taking DFS to the next level here in Australia and once again, a huge congratulations to the first ever Live Final winner “Richozzz”!