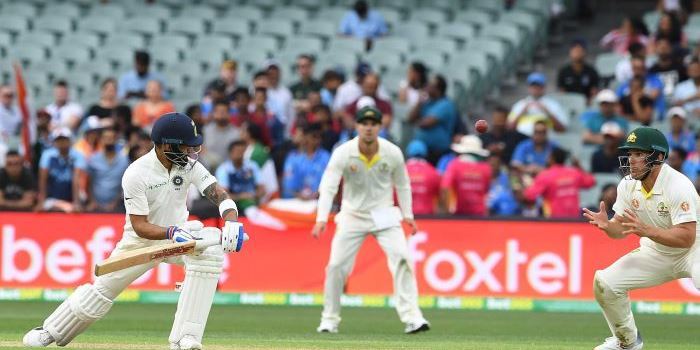 The second Test between Australia and India starts on Friday December 14 at the brand new Optus Stadium in Perth. India has played  four Tests in Perth at the old WACA ground, winning just once back in 2007/08. The other three have been won, quite convincingly by Australia. An early look at the wicket has revealed an old-fashioned "green top" with the curator promising it to be bouncy and fast!

The series started last week with the first Test at the Adelaide Oval. Both teams struggled to assert any authority with the bat and in the end, India ground out the victory by 31 runs late on the fifth day.

There are daily fantasy sports contests for the second Test at several Australian DFS sites. SportChamps have a $500 contest that costs $10 to enter, while MoneyBall has $2,000 up for grabs with a $15 buy-in. However the big contest is again at Draftstars who will be putting up $7,000 guaranteed in their major contest, with an entry fee of $15.

The only batsman in the first Test to look comfortable and dominant was India’s Cheteshwar Pujara. He scored a glorious century in the first innings (and the only one of the match) before following up with a timely 71 in India’s second dig, earning him man of the match honours. He scored a mammoth 244 points at Draftstars and has a value there of $19,800.

India’s Keeper-Batsman Rishabh Pant was their most aggressive batsman in both innings, scoring 25 off 38 balls in the first innings and 28 off 16 balls in the second. He also took 11 catches for the match. With a price of $16,400 he’s on the affordable side of expensive and well worth considering.

Australia’s captain and keeper Tim Paine is at a very handy price of $11,200 and had a decent outing as well. He scored 46 runs all up and took 4 catches. Being a keeper-batsman, he will produce a solid score and isn’t on the expensive side, making him a solid option.

Marcus Harris scored 26 runs in each innings in a steady start to his career. He costs just $9,600 and is capable of performing much better. He had a fantasy score of 82 in the first Test and doesn't need a massive score to hit value here.

The pick of the bowlers in the first Test, in fantasy cricket terms, was clearly Nathan Lyon. The Aussie offie scored 252 points, the highest of any player in the first test, taking a total of 8 wickets as well as contributing some valuable runs. He’ll dangerous on any surface and will no doubt be bowling plenty again here, making him a big chance of replicating that performance in Perth. He is on the expensive side, with a price of $17,900.

Aussie quick Mitchell Starc has a price of $16,300 and scored a very good 163 points in the first Test, despite recent media scrutiny over his performances. Starc will love seeing the pace and bounce in Perth and should bounce back hard in this Test.

The cheapest available bowler who appeared in the first Test is Australian all-rounder Travis Head. He bowled just 2 overs in each innings, but scored a brilliant 72 in the first innings and 14 in the second. He costs $12,900 and is a great fantasy choice.