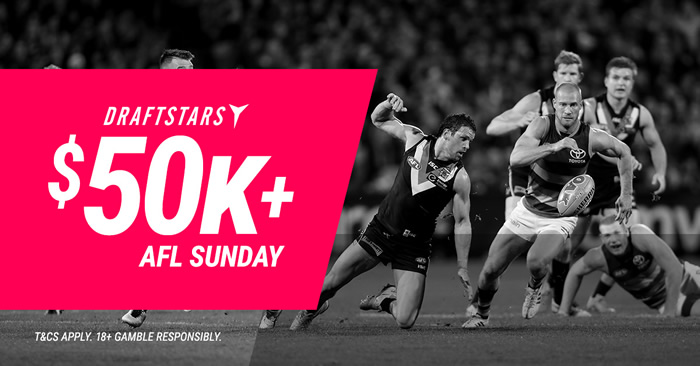 We’re starting to get towards the business end of what has been a crazy 2017 AFL season, with just four rounds remaining before the finals get underway. And while things are getting serious on the field, things are getting equally serious off it, with Draftstars announcing a huge prize pool for this Sunday’s Round 20 AFL Fantasy contest.

For most of the season, the prize pools have been hovering between $20,000 and $30,000 for the major AFL contests, but this Sunday Draftstars have upped the ante, with a massive $50,000 prize pool guaranteed!

Entry is still just $15 and the top 750 players will finish with some profit for their efforts!

Sunday’s offerings in Round 20 of the AFL include St.Kilda hosting West Coast in a make-or-break game at Etihad Stadium, Richmond and Hawthorn clash at the MCG in the last roll of the dice for the Hawks, and to cap off the round it’s the South Australian Showdown with Adelaide and Port Adelaide going to war.

If you’ve never tried Daily Fantasy AFL, then there’s no better time to join Draftstars and give it a try. Creating a line up is easy. Using a budget of $100,000, you just have to pick two forwards, four midfieders, two defenders and a ruckman to make up your team. You won’t have enough budget to pick a team full of superstars, so use your footy smarts as coach to pick the line up that will maximize your score. 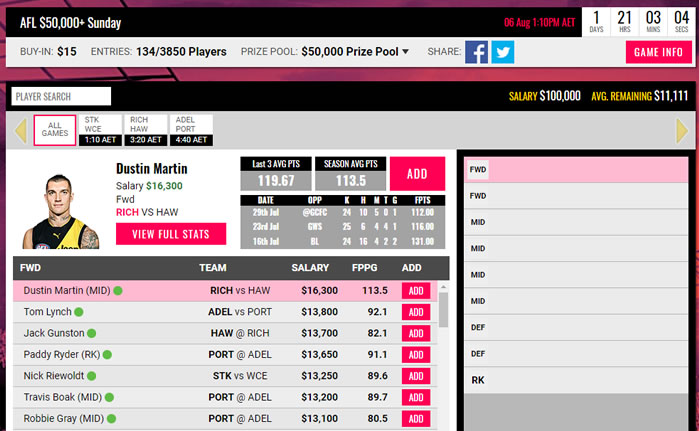 If AFL is not your thing, Draftstars also offer contests for NRL, as well as NBA, BBL, NFL and Soccer during their respective seasons.

Draftstars is the biggest Daily Fantasy Sports platform in Australia, so we highly recommend you create an account and enjoy the $50,000 guaranteed AFL Fantasy contest this Sunday!

For more information, check out our Draftstars review page.