We are back at the MCG for the second night in a row for the first Friday night game of the season between Collingwood and Geelong.

There are major tournaments across the platforms for this match, including:

Finally we have also provided a daily fantasy based preview for each and every team ahead of the 2019 season to ensure you are best prepared come round 1. In conjunction with this preview please ensure you read the preview for the teams in play on this slate:

Both the Pies and the Cats were difficult to score fantasy points against in 2018 giving up the equal sixth fewest points per game:

The avenue to attack Collingwood was through the back line as they gave up the second most points in the league to opposition backs, while Geelong also gave up an above average amount.

Both teams suffocated scoring of opposition forwards with the Cats giving up the 3rd fewest points to the position in 2018, and the Pies giving up the 5th fewest.

This game is expected to be close with a line set at 8.5 points the Pies way. As a result a full blown game stack may not be optimal. That said there are still sneaky correlations that can be used to help improve your rosters. 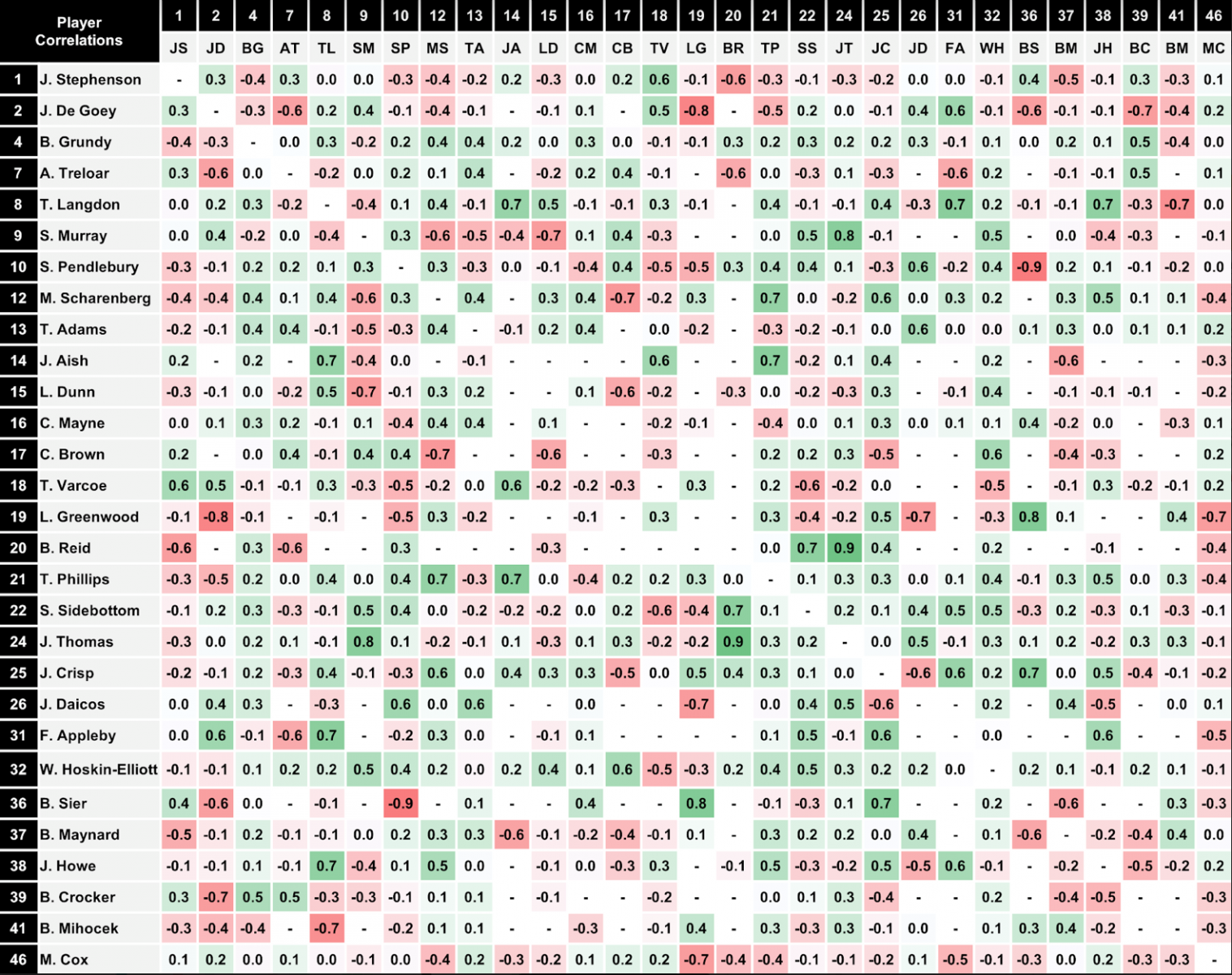 Darcy Moore DEF (DS $5,860, MB $4,100) is at a value price on the basis of his performance in 2018 where he averaged just 41.7 fantasy points. At closer look, however, Moore’s season was ravaged by injury playing just 7 games and only one game at over 66% game time. In that single game he scored 86 fantasy points playing the plus one in defense role that he will assume again this season. Moore averaged 66 points in his two JLT games and if he can get through the game he should be a lock to return value in this game.

Jordan Clark DEF (DS $7,000, MB $3,500) was taken with the Cats 15th pick in the 2018 draft as a skillful half back who averaged 70 fantasy points in the NAB AFL U18 Championships and 68 in the WAFL during 2018. He fit right in during JLT averaging 69.5 fantasy points and should be used in the quarterback role with Zach Tuohy out for this match. He also benefits from an elite matchup with the Pies giving up the second most points in the league to backs in 2018.

Joel Selwood MID (DS $13,560, MB $7,900) is far too cheap as a result of his poor performance to end last season posting just 1 tonne from his last 8 games. However, he was tagged in three of these games, looked to be battling an injury and at times played behind the ball. In this matchup the Pies usual tagger, Levi Greenwood, is not playing and Selwood looks to be moved back into the midfield based on his JLT games where he averaged 107 points from just 65.5% game time.

Jeremy Howe DEF (DS $10,790, MB $6,300) benefits from a great matchup based on 2018 where the Cats gave up the 7th most points to backs. He also brings GPP winning upside at this price point topping the 130 point mark twice last year.

Brandan Parfitt FWD (DS $9,800, MB $6,200) is the number one candidate on the Cats list for a breakout season as he hits his third year. The club has ear marked him for more mid field time, which has been notable during the JLT where he attended the third most centre bounces in the match against Essendon. He has already flashed upside topping the 100 point mark 4 times in 2018.

Patrick Dangerfield MID (DS $15,740, MB $9,800) looks set to return back to the midfield role after spending a significant portion of playing time up forward in 2018. The last time he was a full time midfielder was in 2017 where he averaged a massive 120.5 fantasy points. This is also a positive matchup as while the PIes overall held opposition midfielders in check during 2018 they did concede points to the top players giving up an average of 107 points per game to the top 3 scoring players at that position.

Steele Sidebottom MID (DS $14,600, MB $9,200) was consistently picking up a tag towards the end of 2018 which has driven his price down. He averaged just 69 points in games where he was tagged last year (34 points below his season average), but on this slate Geelong’s usual tagger Scott Selwood is not playing. Assuming on this case Sidebottom gets free rein he is an elite play on this slate.

Gary Ablett MID (FWD) (DS $15,220, MB $9,400) is expected to play significantly more time up forward this season. As a result he is likely to see a decline in fantasy scoring from his 103.8 point average in 2018. He played in just one JLT match this preseason and scored 51 points from 69% game time. He is priced way too high based on his role last season and is an easy fade to start this year.