We are back at the MCG this Thursday night for a rematch of the 2018 preliminary final between Richmond and Collingwood. The usual major tournaments are available across the platforms for this match:

On this week's episode of DFS Down Under, Smatho and Hef spoke at length about this match as well as the rest of the round - take a look!

Collingwood was one of the tougher teams to score against overall in 2018 conceding the sixth fewest fantasy points, while Richmond was around the league average mark.

Richmond did not tag in a single game throughout 2018, which was evident in the fact that despite only giving up a league average mark to mid fielders they conceded the 5th highest amount to the top 3 players at an average of 107 per player per game. This meant that rostering star mid fielders against the Tigers, which Collingwood is in high supply of, was a great strategy.

The best avenue to target Collingwood in 2018 was via the back line as they gave up the second most points in the league to the position.

Be wary on this stat on this slate however, as the Tigers game plan has not typically been possession based. They had just the 14th most disposals in 2018 and the 17th most marks. Based on the expected game play between these two teams that we address in the Game Stack section below I think it will be Collingwood who use possession play through the backline, something we saw from Carlton last week where their backs averaged the second highest of all teams in round 1.

The ruck battle looks to be an obvious choice from the numbers with Richmond and Toby Nankervis giving up the second most points to opposition number 1 rucks last season, while Brodie Grundy held opponents to just 86 points per game.

In the three games these two sides played each other in 2018, Collingwood dominated possession and fantasy scoring. They averaged +46.6 disposals, 25 marks and +19 tackles across the three games, making them a great option for stacking. 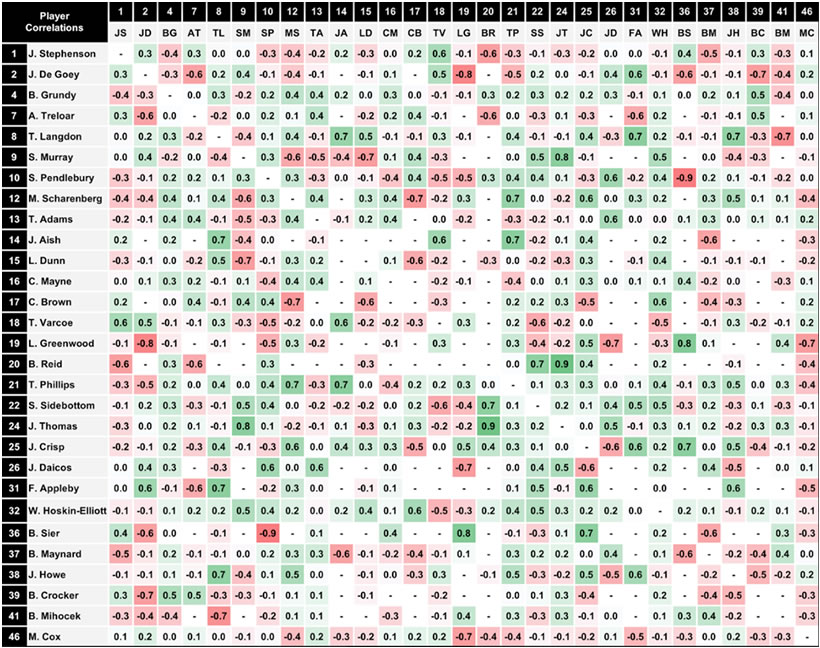 Darcy Moore DEF (DS $7,500, MB $4,100, PO $7,200) is one of the cheaper players on this slate and has the potential to pick up possessions across the back line if the Pies play a possession game. In this case it would be a good option is to link him with another Collingwood back. At his price he will also free up cash to spend up given the high number of star players on the Pies side.

Trent Cotchin MID (DS $11,460, MB $6,500, PO $11,200) looked to be back to playing his normal game last Thursday racking up 31 touches and 107 fantasy points. If his role has reverted back to a more traditional midfielder that he is capable of playing, his average should bounce back to the mid-90 point range making him great value at this price point.

Steele Sidebottom MID (DS $14,820, MB $9,200, PO $15,000) had one of the worst games I have seen him play last Thursday so… of course in DFS I will back the truck over him and go again this week. The Tigers did not tag once last year, which really opens up all of the Pies star midfielders as plays but Sidebottom is the best priced. In the last two games against Richmond in 2018 Sidebottom notched up 141 and 120 fantasy points.