This Friday we are back at the home of footy to see Collingwood host the Western Bulldogs. Both teams are coming off a loss and will be looking to get their season back on track. The usual major Friday night tournaments are on offer across the platforms:

Check out Episode 8 of our weekly show "DFS Down Under" where Smatho and Hef discussed this game as well as the rest of the round!

Through the first three rounds the Western Bulldogs have been a different looking outfit in conceding fantasy points giving up fifth fewest. This is a stark turnaround from 2018 where they gave up the fourth most in the league.

Collingwood on the other hand have been continued on their ways being the stingiest team in the league thus far.

Both teams have restricted opposition midfields to start this season, which means this game will come down to who can get the gameplay on their terms. Collingwood are the clear favourites to do so as the better team, and in addition there is also the chance the Western Bulldogs points against are low due to the small sample size as they gave up the 7th most points to midfielders in 2018.

Forwards have been the best area to target the Western Bulldogs. They gave up the third most points to the position in 2018 and this trend has continued through the early stages of 2019 as they have conceded the third highest top 3 scores at 83 points per player.

Ruck is the other position to attack with the Bulldogs giving up 94 points per game to opposition number 1 rucks through three rounds.

Collingwood are at home and favoured by 26.5 points. Last year in their one match Collingwood won by 45 points and had 6 players top the 100 point mark and another 5 go for 90+. They should account for the Bulldogs comfortably and make for the obvious team to build your stacks around. 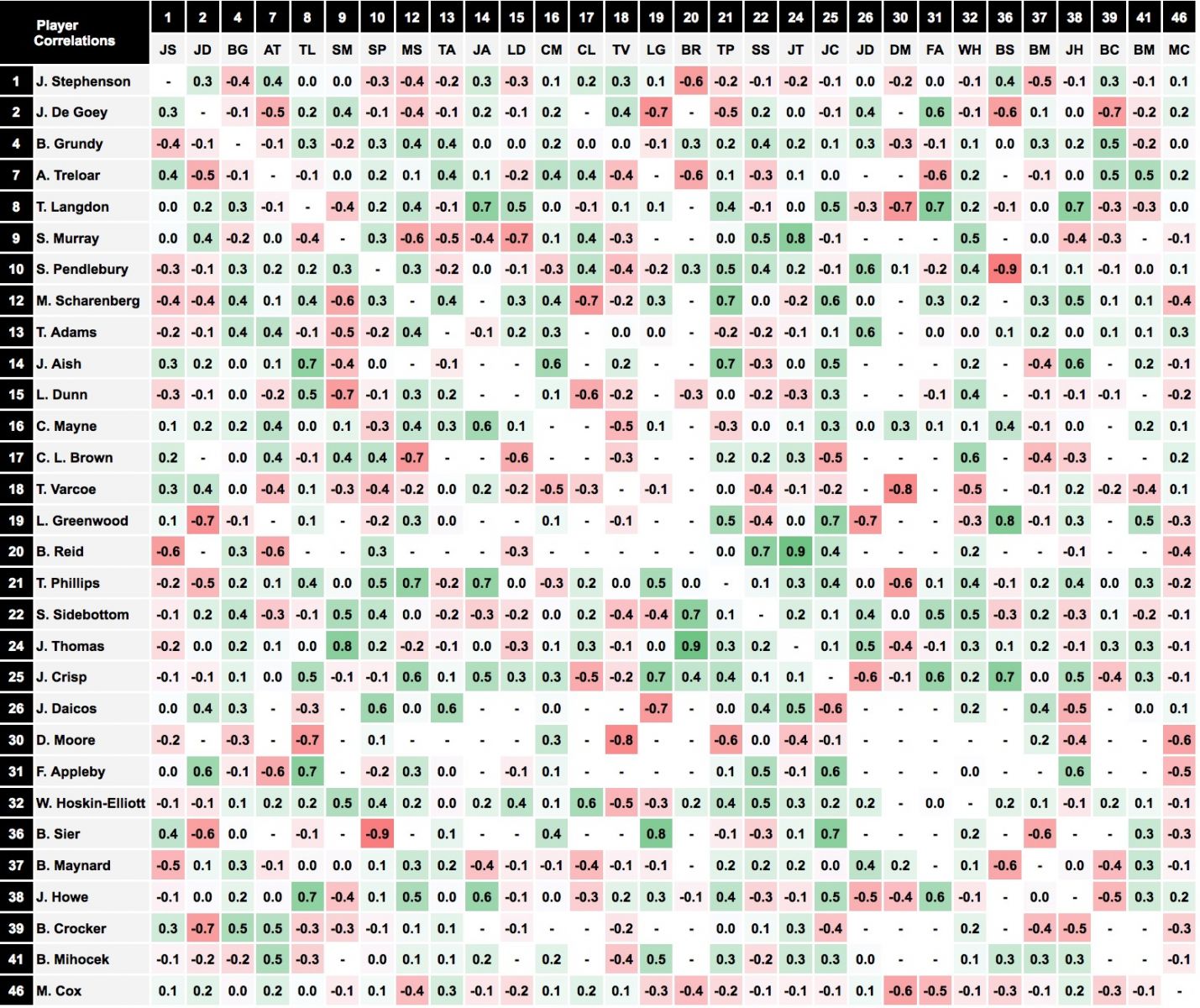 The big choice for mine when starting a Collingwood stack is whether it will be with Steele Sidebottom or Adam Treloar. These two players who do a lot of damage on the outside appear to cannibalise each others possessions evidenced by their negative 0.3 correlation.

If you start with Adam Treloar, Taylor Adams makes a nice pairing in the middle with a positive 0.4 and up forward he links well with Brody Mihocek, positive 0.5.

Darcy Moore (DS $7,550, MB $4,300) looks like safe value on this slate that will be much needed to squeeze in some of the premium priced players. Moore has hit 60+ points in 2 out of his 3 games up back and managed 52 in the other. Moore also brings the added upside of possibly getting involved in the chain of play across the backline that Collingwood use so much.

Brody Mihocek (DS $9,860, MB $6,500) / Mason Cox (DS $9,460, MB $5,200) are two plays I love on this slate with the Bulldogs struggling to contend with forwards, particularly key forwards over the past 12 months. Mihocek showed what he is capable of if the Pies can get hold of the Bulldogs earlier this season against Richmond where he piled on 115 points.

Meanwhile we all know big Mason has a 100+ ceiling and this is an elite matchup for him where that is possibly brought into play.

Brodie Grundy (DS $16,760, MB $9,900) really looks like an absolute lock and load play on this slate. As mentioned above the Bulldogs have given up the fourth most points to ruckman this year, and Grundy will be a serious mismatch for developing ruckman Tom English. Against the Bulldogs last year Grundy had 124 points.

Steele Sidebottom (DS $14,610, MB $9,200) is still yet to explode this season but started showing signs in the second half against West Coast last week where he notched his first tonne for the season. With no significant risk of a tag and the likelihood that ownership will trend towards Adam Treloar on this slate Sidebottom makes for a great GPP play.