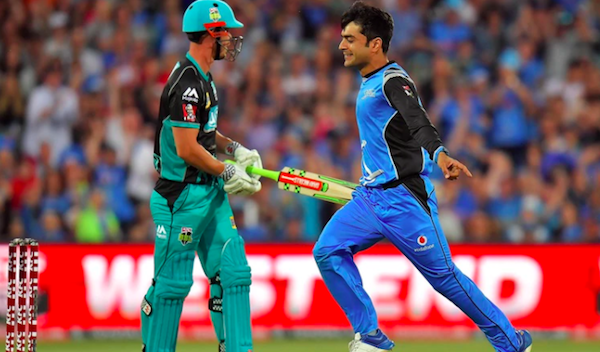 Daily fantasy and tournament betting sites across Australia were feeling extra generous over the Christmas and New Years period, offering some absolutely massive prize-pools in a range of different sports! We take a look at the results from some of the major contests over the holiday period below!

WIth 2017 now in the past, we also took a look at some of the top performers from the entire DFS season in our 'Year in Review', which you can check out now!

The start of the 2017-18 Big Bash League was celebrated with a massive $30,000 guaranteed tournament at Draftstars. As usual, the Thunder took on the Sixers in the season opener, and the Draftstars tournament attracted 1,645 players.

After some monster performances by Sixers paceman Daniel Sams and Thunder skipper Shane Watson, 1st place and a whopping $3,900 went the way of ‘Hedge’ who racked up 544 points on the night. Jayk123, lion4life, Penny1cent and Tryanhit were some familiar names amongst the top of the table. 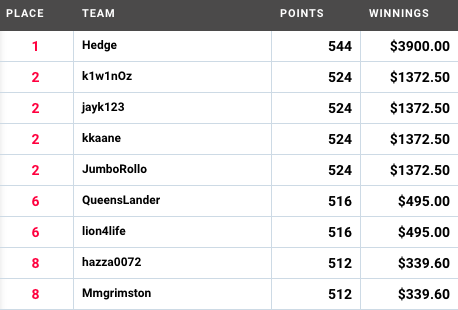 The NBA Thursday tournament was once again the biggest of the basketball tournaments at Draftstars for the week, offering $20,000 and attracting 1,437 players. All-Stars Anthony Davis and Paul George were the catalysts of the day for the eventual winner ‘BigHef’ who racked up 363 points to win by just 1.75 points over who other than Jayk123.

ILoveLamp was a big winner on the day, picking up 8 teams inside the top 30 while Jayk123, Broady4_ and Stevennfl all had multiple teams at the top of the leaderboard. 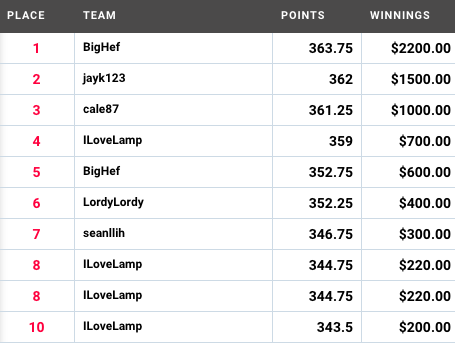 Amazingly, the 400-point target at Draftstars still hasn’t gone off since we last checked in, with the prize pool now climbing to over $100,000! As we reach the halfway point of the season and teams start to conclude their chances of making the playoffs have faded, they will start to play rookies more, so now is a great time to jump in on the 400 target!

‘OurSaviourAlexLen’ racked up a whopping 380 points on the day to win the tournament by three points over Moneyball regular lion4life and aussieboppa.

The final round of the NFL season offered a massive 16 game slate on the Sunday (Monday morning AEDT) and Moneyball celebrated with a $5,000 guaranteed tournament. With so many players to pick from on the slate, the highest % picked player was Patriots running back Dion Lewis at 42.9%.

Coincidentally, Lewis was the 3rd highest scoring player on the day, racking up 28 points and helping ‘SIR GAMBLOR’ to a great win. He picked up $650 while Timzman and Lorney11 collected the minor placings.

TopBetta celebrated the end of 2017 with a massive racing tournament, offering a guaranteed prize pool of $5,000 and attracting 27 players with a further 23 rebuys at $100 a piece. The tournament stretched over the Doomben, Randwick, Sandown and Morphettville meets and after a great day of betting it was ‘jpm1795’ who took out the top prize of over $2,000. 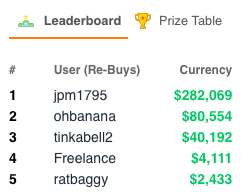 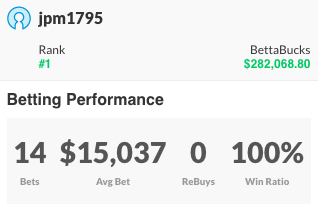