The Adelaide Strikers could not defend their BBL07 title in BBL08 and finished 7th on the table with a 6-8 record. Some shrewd recruiting over the off season sees injection of youth and experience that should produce a high result. Coach Jason Gillespie always has his sides play entertaining T20 cricket. Always difficult to play at Adelaide Oval and the Strikers get to play all 7 matches at home.

The loss of Colin Ingram and Ben Laughlin removes plenty of game experience but the core players that won the BBL07 title do remain.

Alex Carey after a break-out BBL07, was busy with international duty and will once again be busy with the One-Day International side in January. Will open the batting in the games (possibly at number 3) on the games will be available and along with new signing in Phil Salt, we have a lethal opening duo for the Strikers.

After his huge century in BBL07, Weatherald posted 3 half centuries in BBL08 with a highest score of 82 against the Hurricanes. However was dismissed for under 10 runs on 6 occasions so he comes with risk for your fantasy sides. Will be interesting if Weatherald opens with Carey or Phil Salt gets the nod. Will need to monitor the 1st game to see what the order is.

The Strikers’ skipper is a great all round fantasy player but unfortunately we will not see Head until the end of the Test Series (Head was not apart of the One Day World Cup earlier this year). Only played 3 games last season but will be looking to slot back in at the number 4 position at the end of the tournament.

23 year old Salt, is the new signing from Sussex in England, who will slot into the top order. Salt  had a massive break-out 2019. He had a great T20 Blast tournament in England that has lead to offers around the globe for his services. Earnt a game in the Final of the CPL in Trinidad in his debut. Australian audiences are in for a real treat here.

In BBL09, Wells was the “Not-Out” specialist who was not dismissed on 6 occasions, hence the very good batting average. The crafty middle-order batsman will look to build on his side leading 359 runs last year and will look to finish of innings with hard hitting and quick running between wickets. Good value fantasy player.

Jake Lehmann was probably the least owned fantasy player in the competition in BBL08 with his low batting position and lack of bowling opportunity. That changed however when Lehmann was promoted to number 3 and scored a couple 40’s late in the tournament. Unfortunately Lehmann is going to find himself in the lower order again and become fantasy irrelevant.

Michael Neser will one day play for Australia in a Test match and show the Australian public that he is a genuine all-rounder. For now, Neser will continue to carry the drinks for the Test side whilst Australian bowling stocks are set in stone. Neser swings the new ball and smashes them at the end. A great fantasy option for the Strikers who regularly bowls 4 overs and picks up quick runs at the end of the innings.

The young Afghanistani spin bowler has quickly established himself on the world stage as one of the cult figures of the Big Bash League. You think Khan has been around forever but he is only 21 years of age! Rashid was Adelaide’s leading wicket-taker in both BBL07 and BBL08 and was also voted by his teammates as the club’s Most Valuable Player for the second straight season. His bowling trickery and ability to smack late innings attacks makes him an exciting player and brilliant fantasy player.

Being a whirlwind 2019 for the ageless Siddle with selection in the Test team for the Ashes. However, we may not see Siddle in the international arena going forward which means he should be available for the full BBL09 tournament. Only played 6 games last year due to international commitments but will bring a wealth of experience to the Strikers side. Interesting to see if his slight bowling variations are still good for T20 cricket.

Towering quick Billy Stanlake is one of the fastest and most feared bowlers in Big Bash cricket.

The 204cm paceman can regularly reach speeds in excess of 140km/h and is nearly unplayable when bowling a bouncer or yorker. His selection in various T20 and One Day Sides could mean Stanlake could be missing for some games in the tournament. Interesting to see that his BBL08 figures were actually quite poor so Stanlake could be a good fantasy fade candidate early in the tournament when the field will be on the quick bowler.

The 200cm langly fast bowler was signed by the Strikers from the Sixers after Ben Laughlin was released by the franchise. Mark my words - Conway is a bonafide ‘Character’! Loves a wicket, loves a sendoff and does the best David “Bumble” Llyod impersonation going around. Making great inroads for the New South Wales Sheffield side including a 10 wicket haul against Queensland back in October. If he gets a chance to play,make sure the broadcaster get a microphone on him!

Matt Short was probably the most disappointing player for the Strikers last season after a great start. Batting at 4 he scored 65 runs against his old side in the Renegades in the 2nd match of BBL08 and then literally did not much else after that. He was tried up higher in the order then found himself batting at 7 at the end. Then only snared 2 wickets which was the 1st game and was not seen in the bowling attack since. A new season brings a fresh start so we may see a bounce back for fantasy.

Cameron Valante took his opportunity in the Strikers side by providing big hitting at the end of innings and useful bowling. Bowled his 4 overs in the later stages of the tournament and will be looking to build on his debut season from BBL08.

Winter is a developing swing bowler looking to earn a spot in the Strikers lineup this year. He might not get a lot of opportunities this season, but if he does play then you should find him a relatively cheap option.

The backup spinner for the Strikers lives in the shadows of fellow spinner Khan and hasn’t really grabbed his opportunity when it does present. If Khan does not play for any reason then O’Connor will be a fantastic value option. I wouldn’t be playing him if Khan is playing.

Wes Agar is the youngest brother of Australian Test player Ashton Agar. Wes is a fast bowler who got another taste of the Big Bash League last season, where he played 2 games. With the departure of Laughlin, we should see Agar more often this season and will be a good value play if picked to bowl.

The now veteran of multiple title winning T20, Shield and One-Day titles comes to Adelaide with all the experience a side could want. The fifth-highest scoring batsman in BBL history, White will play the anchor role in the middle order and provide guidance in the field. A great pick up for the Strikers. Handy fantasy playing but don’t expect a high ceiling from White.

The son of former Australian coach Tim, Harry Nielsen is a gifted wicketkeeper-batsman who can clear the rope with ease. Will be a handcuff to Alex Carey throughout the season so expect Nielsen to feature at the back end of the tournament. Played well in a recent PM’s XI against Sri Lanka. 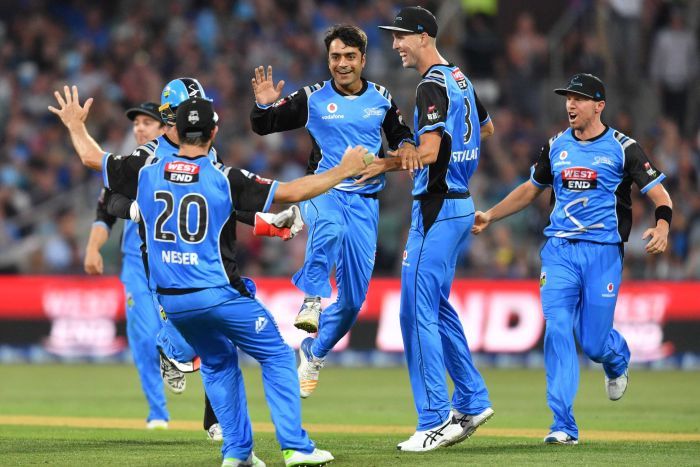