The Thunder have gone through the most changes to their squad for BBL09 with the loss of international superstars Jos Buttler and Joe Root along with T20 legend Shane Watson. However this core squad of players should get plenty of run this year with international duties unlikely to affect the team.

Tough to see the Thunder at the pointy end of the table but should give their fans plenty to cheer about in BBL09.

Khawaja only played 1 game in BBL09 but it is highly likely that he will play the majority of the tournament. Khawaja actually boasts the best average of any batsman in the history of the competition (just under 50 in 25 innings) and will lead this batting attack in the absence of Shane Watson. Likely to be one of the leading run scorers for BBL09.

English master blaster Alex Hales returns to the BBL since his last appearance in back in 2014 for the Hobart Hurricanes. Whilst no longer on the England international squad, Hales’ form in the Super League in South Africa (97no off 55 balls) at last bat, may have selectors thinking twice. A very powerful batsman and has an excellent Strike rate.

BBL08 Record: Yet to make his debut

Morris from South Africa is a bowling-all rounder who can bowl at 140k’s and throw the willow at the end of a T20 innings. Has represented his country in all levels of the game but T20 is his specialty. But it is likely that his commitments in South Africa mean Morris will not be available for the 1st game against the Heat to start BBL09. Make sure he is not in your opening side.

Ross has been recruited by the Thunder to sure up their middle order after a patchy time at the Heat. With Watson, Root and Buttler out of the team, Ross will get plenty of opportunity batting at 5 and could be a great value play if the Thunder find themselves 3 down with not much on the board. His explosive strike rate could get him into many fantasy teams down the stretch.

Ferguson has been thrusted into the captaincy of the Thunder after a stella BBL08. Batting at 3, Ferguson plied on 442 at an average of 34 including a 113no against the Scorchers. Only 2 games last season Ferguson failed to score over 10 runs. Ferguson will be a reliable source of batting runs and has the potential to be the leading run scorer of the tournament.

The 20-year old NSW batsman will get another go in the middle order of the Thunder after a yo-yo season in BBL08. Started with a 63no batting at 5 against the Stars but failed to score over 10 in the next 5 innings. With Root gone, we should see Sangha at 4 or 5 in the order. Could this be the break-out season Sangha is looking for?

All-rounder Green is regarded as a very good defensive bowler who is able to restrict batsmen from scoring. He’s also a very handy batsman capable of scoring big late-innings runs, making him an ideal player in T20. The most interesting part of the offseason is that he has signed on with the Thunder for the next 6 years! Sure the wives will enjoy that! Green is a great fantasy play and will be priced up throughout the tournament.

Sams had a break-out season with the Thunder by showing his all-round capability with the ball and bat. Depending on the situation, Sams would enter the batting lineup at either 5 or 6 to score quick runs. Although the runs were quick as he seemed to get out before double digits. Sams is there for his bowling and 15 wickets in BBL08 was a great return. Will lead this bowling attack in the absence of Watson, Cummings, Rainbird and Jordan.

The tall quick has always been known for his steep bounce and speed variations in his bowling. A recent move to Tasmania has proven to be worthwhile but was in the headlines for the wrong reasons. Had a brain fade moment getting run out in a recent Marsh One Day game was amusing to watch. His lack of wickets in the tournament does scare me off a bit.

Big things were coming out of the Thunder camp about the big-hitting teenager. Unfortunately a fractured wrist in a trial game means we will not see Davies until the later stages of the tournament. If the Thunder are out of business we may see Davies show his talents.

The former Heat player comes down to the Thunder after being in and out of the Heat side in the past two BBL seasons. We haven’t seen Doggett play any First Class cricket this season so his form and availability are a bit of a mystery. Will be on standby if any of the Thunder quicks go down with injury or form.

BBL08 Record: Yet to Play

The 16yo teenager was signed by the Thunder as a rookie who could play as a replacement player. Probably won’t play in BBL09

Nair has a whirlwind 24 months after being banned for an illegal action and losing his NSW contact, to taking wickets in the Marsh cup earlier this summer. With Fawad Ahmed gone, Nair along with Green will lead the spin attack for the Thunder who now becomes a spinner who is handy with the bat. I’ll monitor to start with.

The big quick joins the Thunder after leaving the champion Renegades. Could not get much a go at Melbourne, Tremain will spearhead the Thunder attack for the tournament. Taking plenty of poles for Victoria, do not be surprised if Tremain is in within the top wicket takers of the tournament. If he is cheap early, jump on.

Lenton is a skilled batsman and wicket keeper where he took his chances with the bat in BBL08. But a fractured finger stopped his season from any momentum. Lenton is the handcuff to Matthew Gilkes so we may not see much of Lenton this season.

McAndrew is a versatile medium pacer who bowls with good variation. He’s also a capable enough lower order batsman. He will be a cheap fantasy player who may only play a few games again in BBL09.

One of the better players of the Thunder team, Cook who works full time for the NBN outside of cricket was signed to play BBL09. A replacement player in BBL08, Cook took 8 wickets with his tall framed off spinners. Another value option if Cook features anytime during BBL09.

Gilkes will get the nod as the 1st choice keeper for the Thunder after being groomed by the Thunder Development squad along with NSW Transition squad. Played two games last season and scored a 51 on debut against the Scorchers in BBL08. Should bat in the 5 position and will be cheap for fantasy early.

As per the Sydney Thunder "Thunder development rookie, fast bowler Liam Hatcher, was named in the squad to travel to Brisbane after the BBL's Technical Committee rubber-stamped the club's request to sign him as an injury replacement player for Gurinder Sandhu.

Under the tournament's rules, Hatcher will need to either play in the starting XI or be selected as 12th man against the Heat." 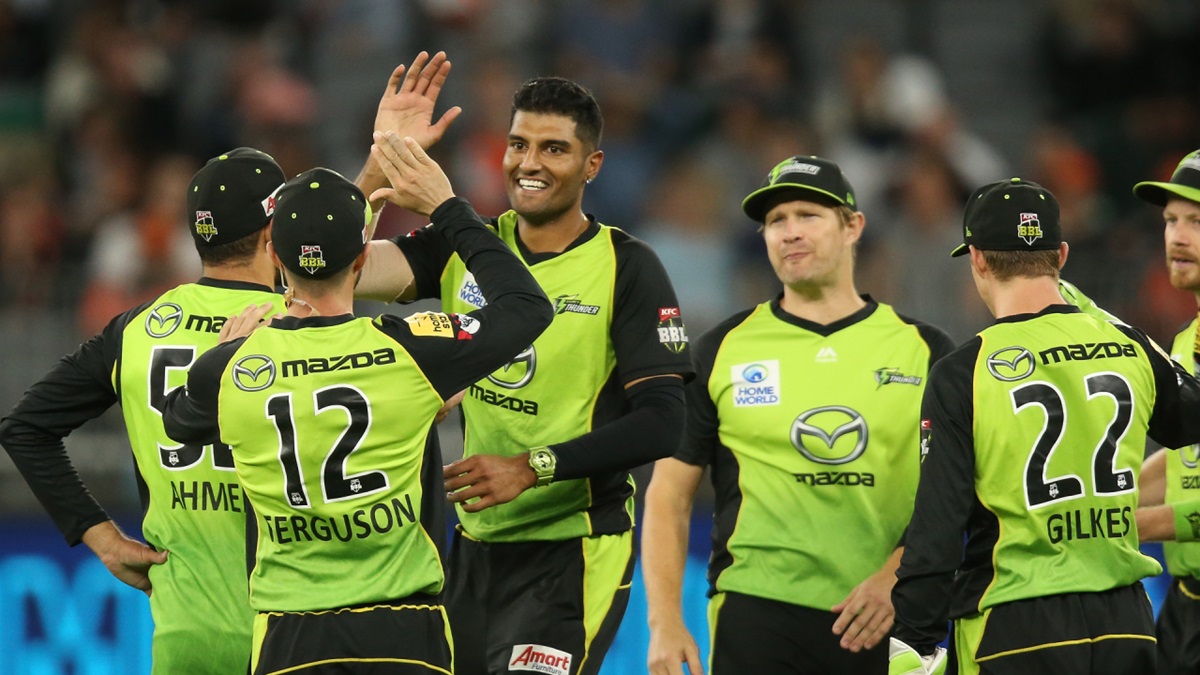