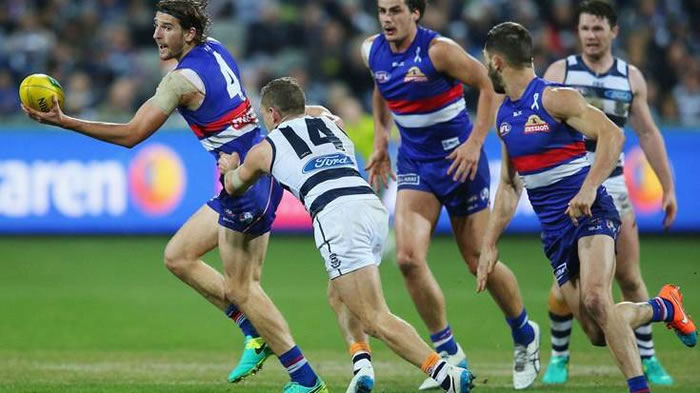 This week’s Friday AFL will see the Cats take on the Bulldogs at Etihad Stadium and once again the team at Fantasy Boss have been crunching the numbers to come up with some of their best plays for your Fantasy AFL lineups atin the big $30,000 Guaranteed contest at DraftStars.

Rhys Stanley vs the No Ruck

The Western Bulldogs have conceded the most fantasy points to opposition ruckman across the year, and by a considerable amount over the last five games. That’s largely because of their lack of a recognised ruckman means that they concede the most hit outs to opposition ruckmen, with a whopping average of 52 hitouts conceded per game.

With that in mind, you may like to consider playing Rhys Stanley in your lineups on Friday night. With an average of 82.2 points this season and a $11,260 price tag on DraftStars, there looks to be plenty of value there.

Total points against – The leaky Doggies

Last night we referred to the Sydney Swans as being one of the stingiest teams in the AFL for conceding fantasy points. Well, the Western Bulldogs are the opposite. They are leaking fantasy points recently, with the third highest total points against over the last five games and a staggering average of 4.8 100+ scores over that same period.

If you look through the recent player scores against the Western Bulldogs you will notice a phenomenal trend of players that play a Mid/Fwd role stuffing the stat sheet.

Expect to see one or more of the Cats dangerous Mid/Fwd players to go big, and it seems that the most likely are Sam Menegola and Patrick Dangerfield due to their increased time in the forward like this season.

Parfitt is probably out of favour with many DFS players at the moment as his recent form has been sliding. The last five games have see him produce an average of 70 compared to his season long average of 81. Parfitt has been severely affected by the resurgence of Gary Ablett and the plethora of mids that Geelong have at their disposal. Against most teams he requires midfield time to elevate his score, and that just hasn’t been freely available to him recently. However the Bulldogs are not like most teams. As we mentioned above, Mid/Fwd role bodes perfectly for a bounce back for Parfitt with the added benefit of a reduced ownership from DFS coaches.

In a new role across Half Back, Hayden Crozier comes up against the perfect match up to continue his recent form. With Geelong looking to free up Tom Stewart across Half Back, Crozier will fill the same role at the opposite end. He has done this in last two games for scores of 95 and 101. Just last game, Nick Vlastuin top scored for Richmond filling this exact role and in Round 10 Kade Simpson went for 124 points.

Add to this the fact that Crozier is carrying a season average of 61 in his price, he is well and truly primed as a top value pick.

Marcus Adams stormed back on to the scene in Round 14 in his first game for the year scoring 83 at a bargain-basement price. A reliable fantasy scorer who averaged 73 last year is still a value pick at DraftStars at his price of $8,900.

A look at a rook - Quinton Narkle

If you look at Quinton Narkle’s recent VFL form there is no surprise he is making his debut for Geelong this week. With recent scores of 111 and 103 that both included 3 goals, did someone say Midfield/Forward role? At his basement price he will also be making his debut in many DFS teams.

Averages can be Deceiving – The Battle of the Midfields

If you were to look at the total points against for midfielders you would see that Geelong and the Bulldogs rank dead even, towards the bottom end of the competition across the year. But delve a little deeper in to recent form and you will see a worrying trend for one team, a trend that DFS coaches can cash in on. The Western Bulldogs last five games spike has them conceding the second most points to mids while over the same time frame Geelong has gone in the opposite direction allowing the second fewest points to their midfield counterparts. If you are inclined to stack your midfield one way, load up on the Cats. 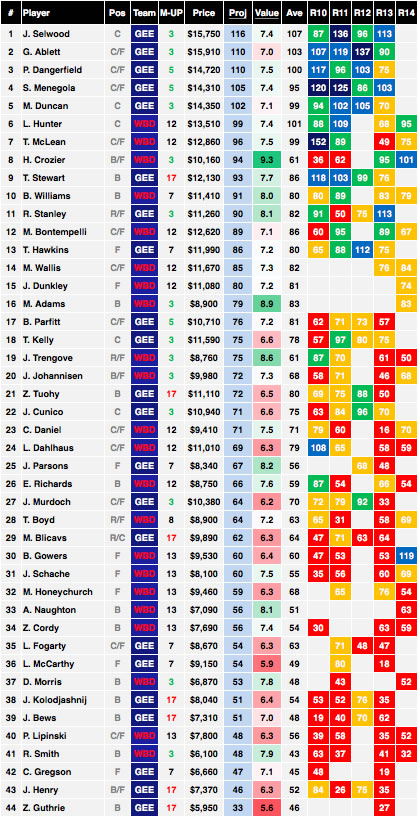