After the huge success of the Draftstars live final for the Big Bash League over summer, the DFS community was anxiously awaiting the announcement for something similar during footy season. We’ve had to sit patiently and wait for a few rounds, but now the time has finally come, as we are excited to announce that a live final has been officially locked and loaded on Draftstars for the 2019 AFL Season! As announced exclusively on the DFS Down Under show last night, here’s all the details you need to know...

The Draftstars Kayo $200k Final will be held on Sunday August 11th, 2019 and will run as a single game contest for the West Coast vs Adelaide game in Round 21. That match kicks off at the twilight time of 4:40pm AEST.

In conjunction with major sponsor Kayo, Draftstars have announced the prize pool will be a massive $200,000 which is an increase on what we enjoyed during the BBL season. The prize pool structure will again be a little top heavy but the top ten players will all be receiving significant chunks of change. Everyone will go home with some prize money, but the top ten will be guaranteed at least $5,000. Reaching the top six is worth $10,000, while our champion will take home an enormous $50,000 first place prize! But winning the DraftStars AFL Live Final is about more than just money. It’s the bragging rights that come with winning one of the biggest single prizes in Australian Daily Fantasy Sports history, and perhaps more importantly, taking home the coveted Draftstars Championship belt!

“Draftstars is excited to be holding the AFL Live Final, especially on the back of the Biggest Bash success earlier in the year,” said Draftstars Operations Manager Scott Simic. “The AFL Live Final is integral to grow Draftstars and DFS in Australia.”

“We anticipate the prize structure will increase the excitement of the day. The top 10 prizes are significant and total over $150,000,” added Simic.

The event will once again be held in Melbourne but this time we’ll be heading to the Colonial Brewing Co in Port Melbourne. For those out of town, it’s only a few minutes drive from the heart of the Melbourne CBD and the venue offers a unique industrial space with some great food and quality craft beers on offer. Of course the game will be streamed live in HD on the big screens around the room thanks to Kayo Sports. 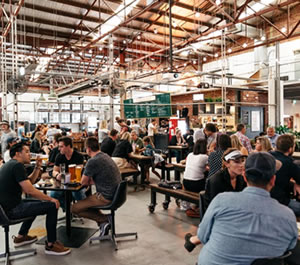 “It’s great to have Kayo Sports and Colonial Brewing come on board as sponsors,” said Simic. “It’s a great venue and I think players will really enjoy the atmosphere there.”

So how do you get amongst the action? Well, once again tickets to this event will be strictly limited with just 105 tickets available. You can purchase a “Fast Pass” straight into the Final for the price of $5,000, or a more affordable option is to win one of the Draftstars AFL Live Final Qualifiers. The Qualifiers will run every day of every AFL round in the lead up to the big event, with entry starting as low as just $2. So winning a seat into the Live Final is a possibility for players of all budgets. Winning a Qualifier will earn you a seat in the final as well as luxury accommodation, return flights for those players coming from interstate and an evening of fun for you and a guest.

Once again Daily Fantasy Rankings will be on board as the official media partner for the Draftstars AFL Live Final as we’ll be interviewing winners throughout the season and bringing comprehensive coverage of the event on the night. We can’t wait!

The best thing about this news is that Qualifiers are live now and will kick off this Friday for the Sydney versus Essendon match. Jump onto Draftstars now, open an account, and make a deposit to take a shot at one of the biggest prizes in Daily Fantasy Sports in Australia! We hope to see YOU there!