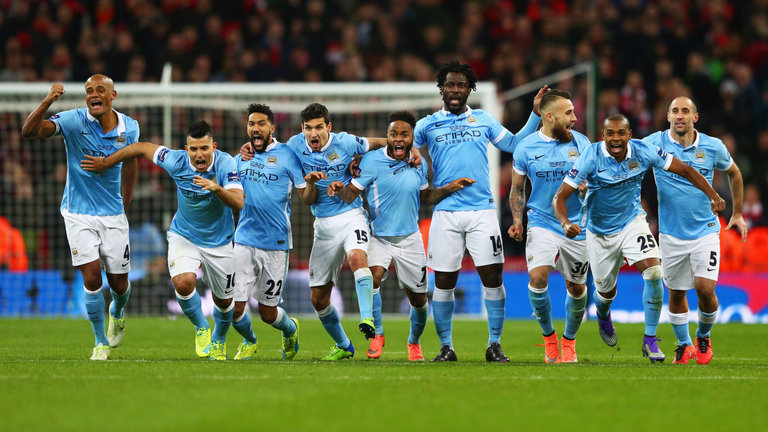 The 2018/19 season of the English Premier League is set to kick off this weekend in what should be a great season of top-flight football.

DFS sites have upped the ante this season and provided some huge contests for us to indulge in each weekend. In Game Week 1, DraftKings have a massive $50k contest for the Saturday night slate, whilst PlayON have their own £2,500 Guaranteed contest.

If you haven’t already, make sure to check out our 2018/19 EPL Fantasy Guide article to get a handle on how to play EPL fantasy, as well as an insight into some of the contests that popular DFS sites are offering this season.

If fit, the obvious choice between the posts is Chelsea’s Thibaut Courtois ($5,600), who will most likely deliver you those valuable clean sheet points. Other decent selections are Bournemouth’s Asmir Begovic ($5,300), who we fancy to make light work of Cardiff, and Watford’s Heurelo Gomes ($5,000).

For the most part, you should have the same mindset when selecting defenders as you do with goalkeepers, that is, who’s going to keep a clean sheet? The only other thing to think about is who’s a threat to score from a set-piece or assist with a cross. For these reasons, we like Antonio Rudiger ($3,800) and Cesar Azpilicueta ($4,800) from Chelsea, Daryl Janmaat ($5,100) from Watford and Adam Smith ($4,700) from Bournemouth.

We have a bit more of a free reign with selecting midfielders as their scoring is a bit more individualised, rather than relying on team success (although it still does play a big part). There are a lot of players to decide from, so we’ll give you a few from different price ranges.

With what looks like a straight forward opening game for the Blues, it’s hard to look past Eden Hazard ($10,300). There’s a lot of speculation about his near future, but if he’s selected and you have the cash, then splash it on Hazard. Other Blues that could be rewarding selections are Willian ($10,100), who’s a similar price to that of Hazard, as well as midfield maestro Cesc Fabregas ($7,600), who should flourish in Sarri’s 4-3-3 system. The other premium priced player I would consider is Crystal Palace’s Wilfried Zaha ($8,300). When Palace are a chance to win it’s usually Zaha who makes it happen.

Jorginho ($5,100) could make his premier league debut for Chelsea and comes in at a very tasty price. From Bournemouth, I like the odds of Jordan Ibe ($7,000) making an impact on the score sheet. Troy Deeney ($5,700) will start up front for Watford and will be dangerous against Brighton, while 35m euro signing Richarlison ($5,700) is great value for Everton, as is Gylfi Sigurdsson ($6,400).

Forwards scores are orientated around their shots, goals and assists. This position is a bit thinner than usual for Saturday’s slate, with most featured teams preferring to go with a lone striker with wingers either side. We believe Alvaro Morata ($8,800) is likely to get the nod over Giroud at the number 9 position against Huddersfield, naturally making him a threat to score big, while Josh King ($7,900) is every chance to get on the scoresheet against relegation favourites, Cardiff. If you’re looking to go a bit cheaper, then Christian Benteke ($6,300) is a hot chance to do some damage if selected by Crystal Palace, whilst heavily underpriced Everton striker, Cenk Tosun ($5,200) should lead the charge for the Toffees in their season opener. 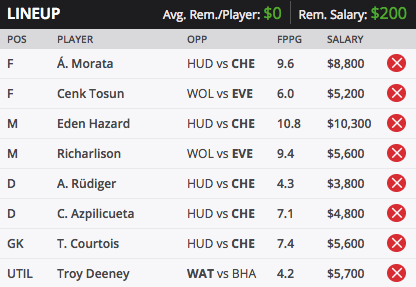