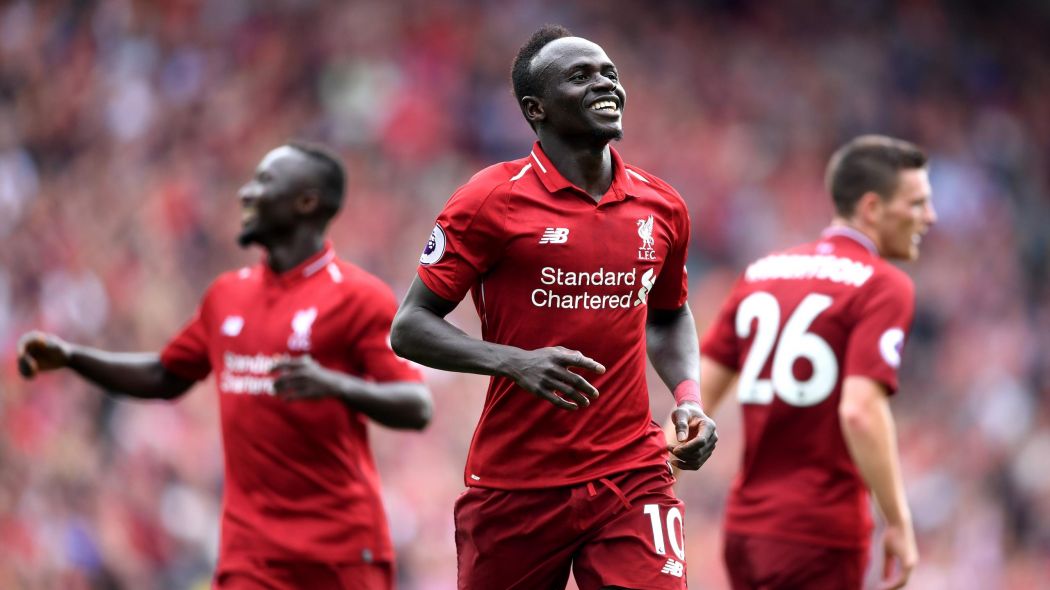 How great it was to have the fresh EPL season kick off last weekend! There were some interesting results, but it was a terrific start for most of the contenders nonetheless.

Once again, there are some great Daily Fantasy Sport contests to get involved in for the big Saturday night slate. DraftKings are hosting a massive $50,000 contest, Draftstars have a $7,000 contest, PlayON have their own $1,000 contest, while SportChamps have a season long $5,000 tournament.

If you missed last week's edition and haven't played much fantasy soccer in the past, make sure you check out our 2018/19 EPL Fantasy Guide article to get a handle on how to play EPL fantasy, as well as an insight into some of the contests that popular DFS sites are offering this season.

Hugo Lloris ($5,900) – Lloris is the obvious pick between the sticks this week with his side hosting newly promoted Fulham. He’ll cost you a little bit more than the other choices, but he remains a safe options nonetheless.

Jordan Pickford ($5,400) – The English international is the other keeper that we like from this slate. He had a tough first up match against the Wolves where he conceded twice, but his side should have what it takes to keep Southampton scoreless this weekend.

Jan Vertonghen ($4,300) and Davinson Sanchez ($3,500) – The Spurs defensive duo of Vertonghen and Sanchez are both excellent picks for your fantasy team. They will more than likely keep a clean sheet against Fulham, which is automatic points. We’re especially bullish on the basement priced Sanchez, who was impressive last weekend taking 3 shots, making 2 interceptions and bagging himself an assist in the win over Newcastle.

Leighton Baines ($5,100) and Michael Keane ($3,400) – Clearly, the two sides we’re big on in this slate is Tottenham and Everton, especially when it comes to loading your defence. If you’re willing to spend a bit of coin in defence, look no further than Leighton Baines. He’s an established star in the full-back position and will have multiple chances to pick up assists against Southampton. The other defensive option that stands out at the Toffees is Michael Keane. He’s terrific with his clearance work and is always a chance to score well from making tackles.

Christian Eriksen ($10,100) – Eriksen will come in as the most expensive midfielder at DraftKings, but we think he may well be worth every penny. He takes all the set-pieces for Tottenham and is always a huge threat to either score or assist from open play.

Ruben Neves ($5,600) – Picking Ruben may seem to many as a play on last week’s points (where he went huge for 25.3), but we feel he could have another great game this weekend. He’s the Wolves set-piece taker and also knocks in his fair share of crosses from open play. He’s definitely a chance to do damage against the Foxes.

Gylfi Sigurdsson ($7,100) and Richarlison ($7,500) – Take your pick between the two of these Everton gems. They come in at a similar price and should run havoc against Southampton. Sigurdsson’s scoring was limited last weekend after being replaced by Mason Holgate in the 43rd minute as the Toffees adjusted their lineup in response to Phil Jagielka's red card. He could prove to be a good POD with a lot of people set to steer clear of him.

Pedro ($6,900) – Pedro has taken the place of Hazard on the wing for the Blues for the time being. He’s severely underpriced for the impact he can make over 90 minutes. If he gets another run against Arsenal he could be well worth a look in.

Harry Kane ($11,000) – Kane is the obvious pick up front this week with his Spurs expected to dominate the Cottagers. He struggled to get going last weekend, but he’s every chance to bag a goal or two this time around.

Cenk Tosun ($6,300) – Tosun gets a mention again this week. He had a decent first outing for the Toffees and should hold his place for the match against Southampton. He’s a great chance to open his account on Saturday.

Jamie Vardy ($8,000) – The foxes star striker will fancy his chances against the newly promoted Wolves on Saturday. He’ll set you back a bit of cash, but could be the difference for your team.

Raul Jimenez ($6,800) - Jiminez had a great game first up for the Wolves, scoring a goal and providing a constant target. He's every chance to back it up with another good performance against the Foxes. 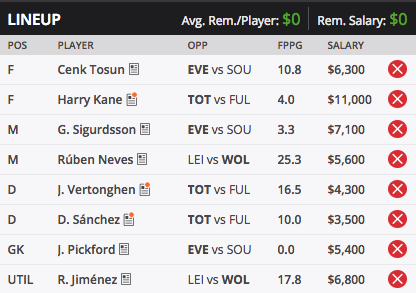