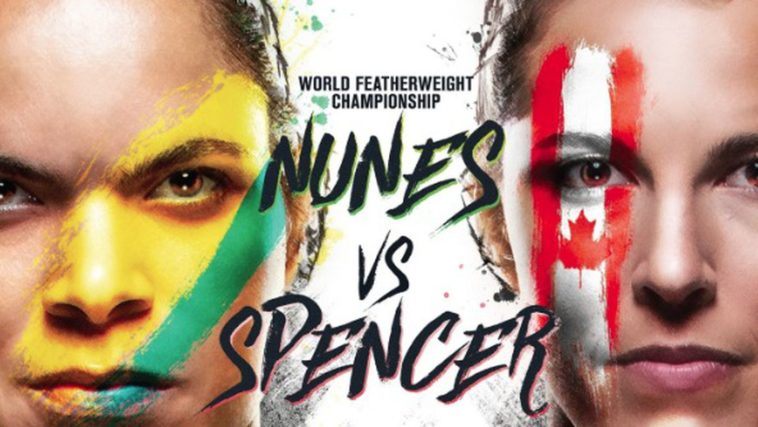 Mixed martial arts is back for the 2nd pay-per-view event post pandemic lockdown where Amanda Nunes defends her featherweight title against Felicia Spencer at UFC 250. Once scheduled at Sao Paulo in Brazil, the event will be held at the UFC Apex centre in Las Vegas Nevada on Sunday morning Australian time.

Along with the feature bout between Nunes and Spencer, former bantamweight champion Cody Garbandt takes on Rafael Assuncaon along with Sean O’Malley taking on Eddie Wineland.

After the success of UFC 249 DraftKings has put on an absurd amount of prize pools to celebrate UFC 250. Headlined by The MMA Millionaire with a guaranteed pool of $1M for a $25 Entry Fee. The MMA $100K Haymaker is also available for a $3 entry which is a 20 entry max contest.

The action gets underway at 0800am AEST on Sunday morning (1800 ET in the United States) with the Early Prelim Card and a total of 12 matches on the card. 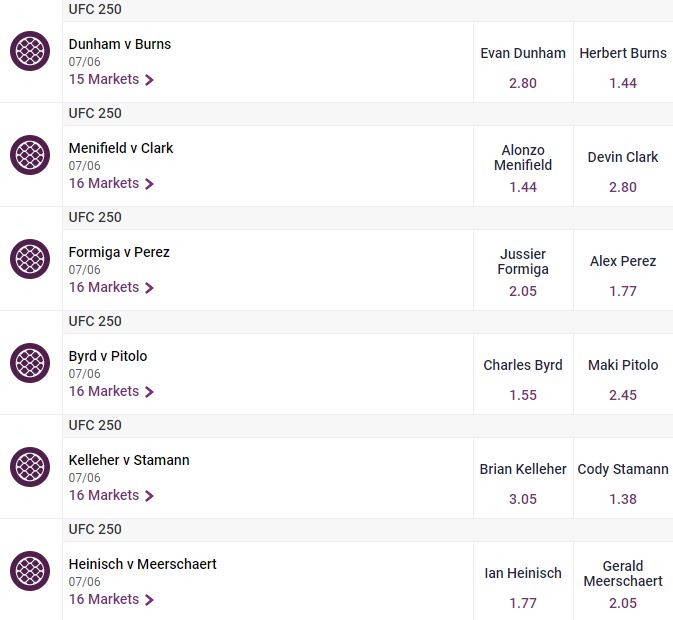 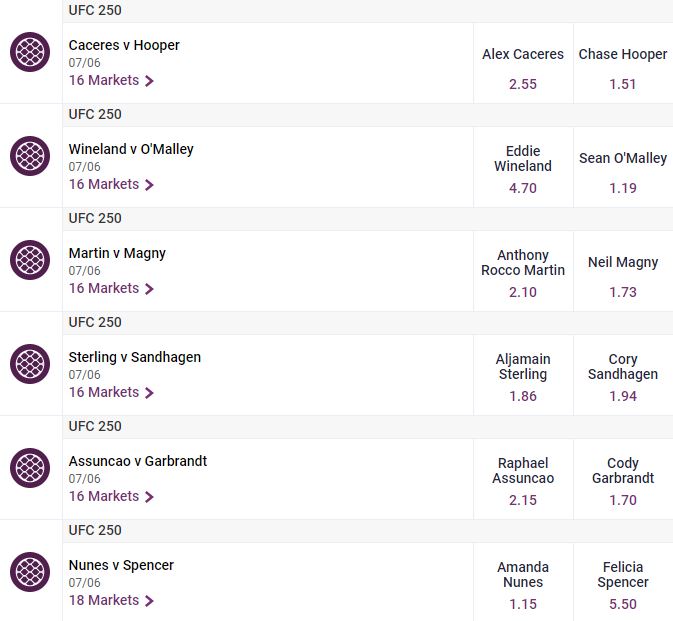 Outside the main event between Nunes and Spencer and the mismatch between O’Malley and Wineland we have ourselves a pretty even card. Although it lacks the big names there are some good young talents coming through the ranks.

UPDATE: Gerald Meerschaert fight against Ian Heinisch is back on due to COVID testing

MMA NEWS ALERT: Ian Heinisch's UFC 250 fight against Gerald Meerschaert, which was previously reported to be off, is back on after one of Heinisch's cornermen was cleared due to a false positive test for COVID-19, per @DamonMartin. pic.twitter.com/mOV5aELTk1

First in and probably the most chalky play on the slate is the best Women’s fighter there is in Amanda Nunes. The markets have her very short and at $9,400 she is the most expensive fighter on the slate. Nunes has not lost a fight for 5+ years and whilst she copped a bit of damage in her recent fight against Germaine de Randmie she is still by far the heaviest hitter of any female on the roster. Her opponent Felicia Spencer $6,800 is relatively new to the UFC with a 2-1 record but has shown a toughness to wear strikes. Nunes should win this quite comfortably but this could go longer than one would think.

Stats that matter: Nunes aveages 2.33 takedowns per 15 minutes and has an impressive takedown defense of 80%. Spencer's current Takedown defence is 0%

Another hot favourite is Sean “Sugar” O’Malley $9,300 who has come through the Ultimate Fighter and Dana White Contender series. A series of injuries and drug issues have kept his time in the UFC to only two fights but there are big wraps on O’Malley. His opponent Eddie Wineland $6,900 whilst experienced has been on the skids with a 4-5 record since 2013. Probably the most safe play outside Nunes by alas you are paying top dollar here.

Stats that matter: O'Malley boasts 6.87 significant strikes landed per minute at an accuracy of 57%. Wineland's strike accuracy is only 29%

A sneaky value play is Brian Kelleher $7,100 who takes on Cody Stamann $9,100. I can see Kelleher going the three round distance with Stamann with his efficient take down defence and his 4.65 strikes per minute. Stamann will try to win this fight with his hands and I see a lack of fantasy output from Stamann without his take-downs.

Stats that matter: Kelleher has a 84% take down defence rating although he does suffer a 53% significant strike defence. 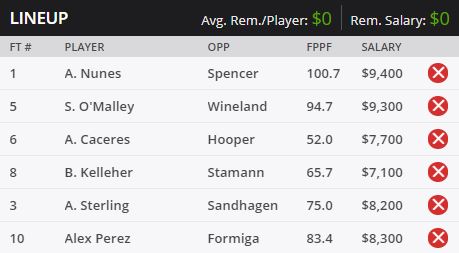