Check out Episode 7 of our weekly show "DFS Down Under" where Smatho and Hef discussed this game as well as the rest of the round!

Geelong have been totally locking teams down through the first two rounds giving up just 1469 fantasy points per game, which is the fourth lowest mark in the league so far this year. This is somewhat consistent with 2018 where they gave up the 7th least points.

Despite conceding the such a low mark the Cats are somewhat surprisingly giving up the 7th most points through the midfield at 91 points per player meaning that the one position to attack will be via rostering Crows mids.

On the flip side during 2018 the Crows gave up the third most points to the opposition's top 3 scoring midfielders at a massive 109 points, which means this game shapes up to be a shootout through the middle.

Another avenue to target will be defenders against the Crows as they have given up the third most points to the position through two games this season.

This game is expected to remain close and as such both games look to be stackable in this contest. I will get a mix of team stacks throughout my lineups but look to lean Geelong in this contest. 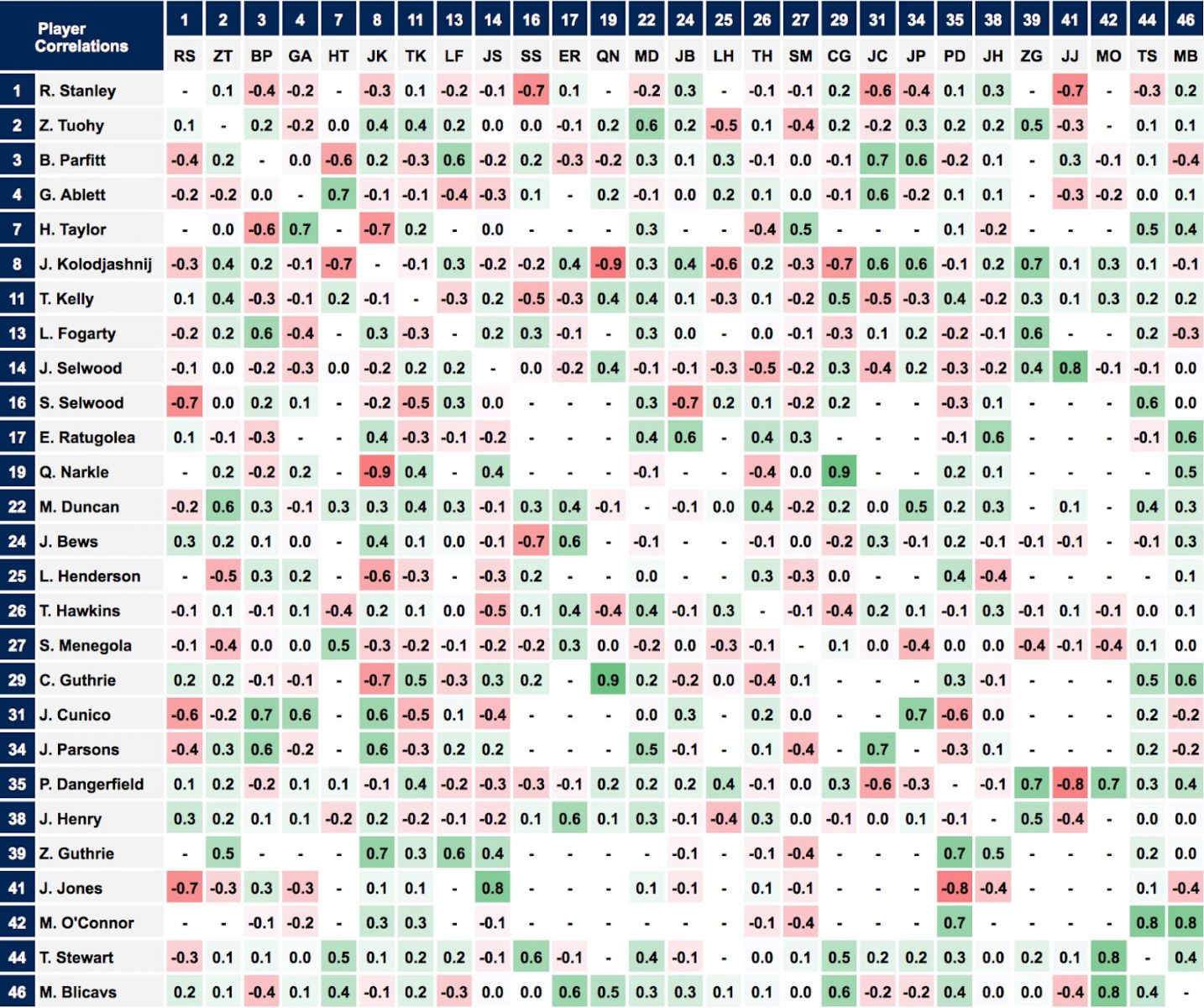 For Geelong if I will likely start my build with Patrick Dangerfield I would be looking to lock in Tim Kelly alongside with the positive 0.4 correlation and Tom Stewart who has been in ripping form to start the season and holds a positive 0.3 correlation.

Jordan Clarke (DS $7,280, MB $4,500) is my value play again this week and he really is looking safe as houses while his price remains in this range. He has the run of half back with Zach Tuohy still out and has notched up scores of 60 and 70 to start the season so far. He has a positive matchup this week against the Crows who as noted above have given up the third most points to defenders so far this season.

Rhys Stanley (DS $11,710, MB $7,000) is drawing a matchup against Reilly O’Brien who has not played a single AFL match for two seasons and has just the 2 career games to his name at AFL level. Both platforms have wisely made O’Brien’s price comparable to Stanley and in this matchup I would much prefer the safety of paying up for the more experienced veteran who also brings an upside of over 100 points.

Patrick Dangerfield (DS $16,550, MB $9,900) has taken pleasure in decimating his old club since he left averaging 127 points from his last 6 games against the Crows, including a massive 151 at Adelaide Oval last year. Dangerfield has been back to a more traditional role in the midfielder this season and it has helped his fantasy game averaging 118.5 points through two games this year. Furthermore as mentioned above the Crows leaked points to oppositions top midfielders in 2018, making this an elite matchup for Dangerfield.

Rory Sloane (DS $14,190, MB $8,300) looks set to have another match without a tag this week as Geelong are yet to employ the strategy this season and haven’t made any team changes to indicate this will change in round 3. Sloane is still well under priced for games if he is not going to be tagged. Last year in their matchup with the Cats he piled in 111 points, and in addition Sloane has an outstanding record at home averaging +12.5 fantasy points from his last 33 games at the ground.