Friday night at the MCG and it is the season’s first loser leaves town match as Melbourne and Essendon go head to head to try and get their first win of the year. The typical Friday night tournaments are on offer across the platforms:

Check out Episode 7 of our weekly show "DFS Down Under" where Smatho and Hef discussed this game as well as the rest of the round!

Melbourne were about league average in 2018 in fantasy points conceded, but amazingly to start this season they have given up the second most through two rounds. This is a very small sample size and the Demons have had a horrific start to the year, however it is still worth considering.

Both teams have been shredded through the midfield this year. This was a position you could attack Melbourne at in 2018, however it is a stark turn around for the Bombers who gave up the least points to mid fielders in 2018. Until they show any sign of intent on the football field however I will be backing in this early season form.

The one position to avoid attacking against Essendon is the backline. In 2018 they gave up just the 6th most points to the position and despite two losses in 2019 they have only given up the 4th most fantasy points to backs at just 54 points per player.

Even though Melbourne have been soundly beaten in their first two games the one position to always avoid is the opposition’s number 1 ruckman. Max Gawn gave up the fewest points to opponents in 2018 and this trend has carried on to start this season giving up just 54 points, the third lowest mark in the league.

Melbourne are favoured by just over two goals in this game and personally I think it could be a steadying contest for them to find some form. On paper they should have more talent and despite the two large losses they have still been winning some of the key indicators such as inside 50s and clearances. As a result I will be leaning to Melbourne team stacks on this slate. 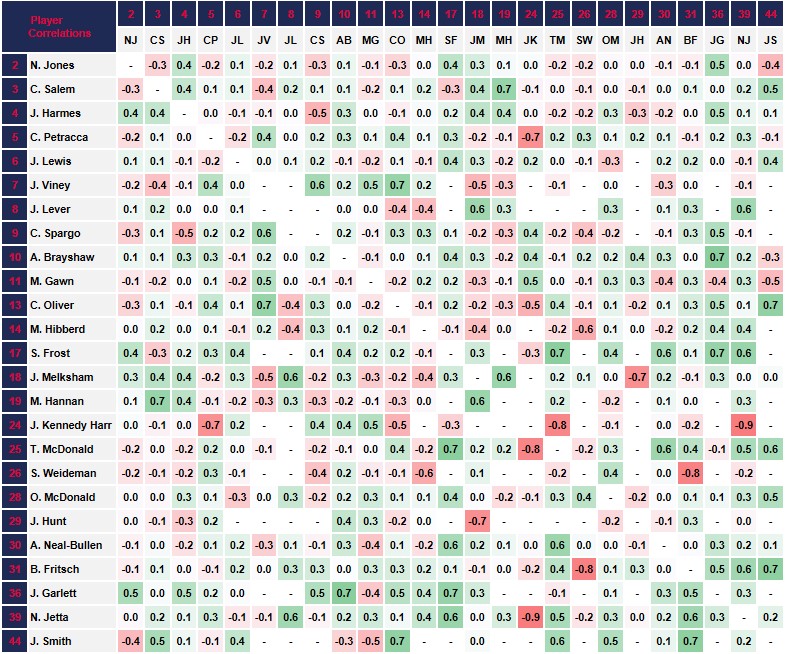 If I am starting off my build with Max Gawn in the ruck the first that stands out to correlate strongly with the big man is Jack Viney at a massive positive 0.7. From there I think you need to have one of the two stars in Angus Brayshaw or Clayton Oliver, these two players don’t necessarily correlate together but they don’t seem to hurt each other with a correlation rate of 0.0.

If you choose to go with Clayton Oliver in the middle the best forward to link up with is Tom MacDonald as the two hold a positive 0.4 correlation.

Adam Saad (DS $9,210, MB $4,800) looked likely throughout the JLT and there has been a lot of play through the Bombers backline for better or worse. He also picks up the added benefit of taking a share of the kick ins. Through two games he has averaged 79 points and if he maintains that level of output his price will increase.

Andrew McGrath (DS $10,760, MB $6,100) is hard to get away from on this slate for mine. He is rotating through the midfield and should be able to post around the 80 point mark. I wouldn’t be touching him on a multi-game slate but he offers enough value in this single match and offers 100 point upside.

Angus Brayshaw (DS $15,520, MB $9,200) seems like one of the safest tonnes in the league right now. Despite his team losing by an average of 53 points through two games he has posted back to back 100 point games. The puts him at 14 tonnes from his last 18 regular season games. He is under-priced and if the Demons are able to get hold of the hapless Bombers his 150+ point upside is in play.

Max Gawn (DS $13,950, MB $8,800) is just a lock and load play in this matchup for me. He is still under-priced based off his horrible round 1 performance and given he has been the hardest ruck to score against over the past 12 months I just can’t even consider playing Bellchambers for little savings.