This Thursday night we are off to the SCG as Sydney and Melbourne both try and salvage a miserable start to the season. The usual major Thursday night tournaments are on offer across the platforms:

Check out Episode 8 of our weekly show "DFS Down Under" where Smatho and Hef discussed this game as well as the rest of the round!

Despite starting the season 1-2 Sydney have been one of the toughest teams to score against through 3 rounds conceding the 4 fewest fantasy points, a trend consistent with 2018. Meanwhile Melbourne have given up the second most points, second only to the Tigers.

Melbourne has been absolutely decimated by opposition midfielders so far this season giving up the second most points to the position. They have been particularly bad against the oppositions top scoring players giving up 121 points per game to the top three scoring players, the highest mark in the league.

Forwards are the other avenue that has been profitable to target against Melbourne through the early rounds. The Demons have given up 76 points per player, which is by far the highest mark in the league this season.

The one position to avoid against Melbourne is the ruck. In 2018 Max Gawn gave up the fewest points to opposition number 1 rucks and through three rounds this year is giving up 56 points per game, which is the third lowest mark in the league.

On the other side Sydney have conceded the fourth lowest mark, however this is likely to be related to the small sample size as Callum Sinclair and the Swans gave up the fourth most points in 2018.

Sydney are slight favourites in this game which, given it it is at the SCG where the Swans have struggled historically, shows how bad Melbourne been to start this season. In addition all the points against indicators point towards a Sydney stack on this slate. 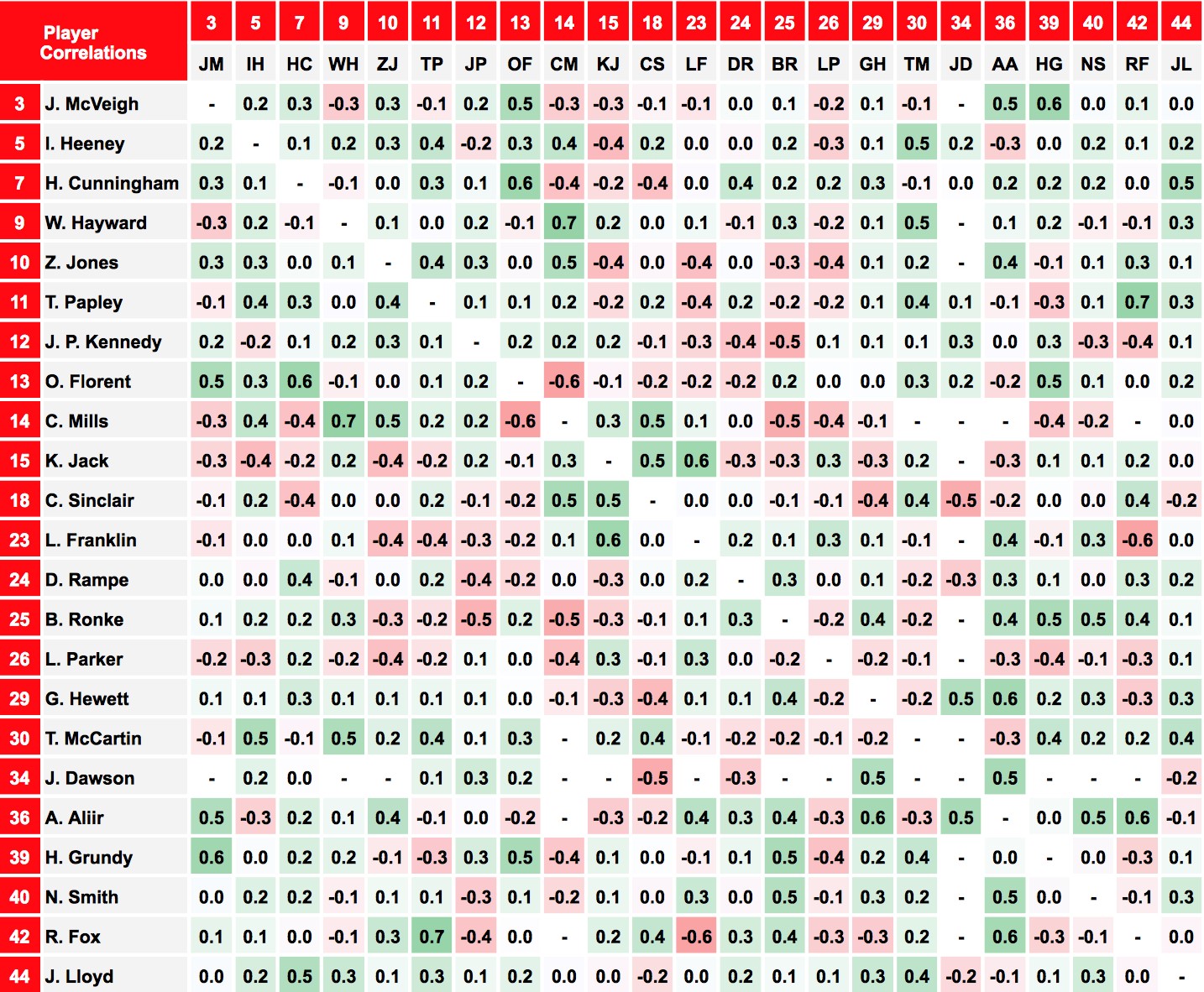 There has been some recent change to the structures of Sydney this season with new players going through the midfield. As a result there are different avenues to go around building a core to your game stacks. One that stands out at this stage in the season is starting with Josh Kennedy, who has been in old school JK form to start the year, and look to pair him with Zak Jones (+0.3 correlation) who is running through the midfield, and Tom Papley (+0.1 correlation) who is also seeing increased centre bounce attendances.

Corey Wagner (DS $6,540, MB $3,900) is an experienced mature player who gets opportunity up the ground and through his two games this season has provided safety in his scoring at this price point with a 51 and 66. On a single game slate that is a solid return if it opens up the right spending opportunities.

Oliver Florent (DS $8,900, MB $5,400) is a GPP play on Draftstars only. He is typically low owned and while he has yet to hit 60 points this season, he does play in a role on the wing that makes higher scores possible and he has flashed a 90 point upside. In this matchup against a team that has given up the second most points to midfielders Florent has a chance to return value. He scored 74 points in his last match against Melbourne.

Braydon Preuss (DS $8,500, MB $5,300) … what a spanner in the works with the ruck position. Without Preuss in the lineup Gawn would have been the lock and load play. Now I am not excited about either of Gawn or Sinclair, given that Melbourne gave up the fewest points to the position in 2018. Preuss should split at least 30-40% of the time in the ruck, given neither him or Max are strong up forward, and in this matchup and at this price he seems to be solid value.

Zak Jones (DS $11,770, MB $6,200) has been back in the midfield for the Swans this season and as a result has averaged 90.7 fantasy points through three games. He notched up his first tonne last match against Carlton and has a great record against Melbourne posting two 100+ scores in his last two matches against them.

Clayton Oliver (DS $14,440, MB $9,300) has had a slow start that is no surprise given how Melbourne of started the year. In 2018 he averaged 109 fantasy points and based on that he is currently under priced on this slate. While Sydney do not give up significant fantasy points they have conceded 110 points per game to the oppositions top 3 scoring midfielders through three rounds. Oliver also flashed his ceiling in round 2 against Geelong with 130 points from 44 disposals.

Isaac Heeney (DS $12,420, MB $7,600)... say what? Yes! I will bless Heeney with another 120 point game purely through putting my fade on him. I know he had 121 fantasy points last week and at this price it is essentially suicide if you don’t roster him with that score on a single game slate. However, Heeney is always a player that is over owned and after last week this should be in overdrive. He still isn't playing on the ball as much in the past and required 4 goals to hit that score last week. If Heeney is going to be 50%+ owned I am more than prepared to risk him.