After 58 matches the Grand Final of BBL08 is finally set – the Melbourne Renegades will host the Melbourne Stars at Marvel Stadium. The Renegades won a heart-stopping contest by 3 wickets against the Sixers on Friday night to earn the right to host the final. The Stars caused an upset in Hobart, completely outplaying the Hurricanes to win by 6 wickets to book their place in the final.

The Renegades take an unchanged squad into this match, while the Stars bring Jackson Coleman back into the 13 at the expense of Nick Larkin. Learn more about the players from each side in our pre-season squad profiles on the Melbourne Renegades and Melbourne Stars.

While the Renegades finished higher on the ladder and host the final, it was the Stars who won both regular season matches between the two sides. At the MCG they restricted the Renegades to 148 and then got them 3 down thanks to an unbeaten 78 from Marcus Stoinis. In their meeting at Marvel Stadium, the Renegades were bowled out for 121 and the Stars passed their score 4 down, with Stoinis making another 70 not out.

That all changed on Friday night in the Semi Final between the Renegades and the Sixers. The Sixers made 3/180 with the five frontline bowlers for the Renegades all failing to earn an economy bonus. The Renegades then chased the total down with one ball to spare for the loss of seven wickets. All of a sudden everything we have learnt about Marvel Stadium this season is a lie! With the same pitch to be used on Sunday we have to expect it will play similarly – maybe just a tad slower – so the lean to playing bowlers should no longer be necessary.

The Draftstars Biggest Bash $150,000 Live Final is here! Two months of intense competition will end with 85 golden tickets in the running for the $50,000 first prize and here at Daily Fantasy Rankings we will cover all the action! Follow us on Twitter to keep up with all the excitement and we look forward to bringing you live updates and interviews with the qualifiers in what is set to be the biggest event in Australian DFS history!

“DFS Down Under” is back for Episode 2 with Luke “Smatho10” Mathyssen joined by AJ to discuss the upcoming BBL08 Grand Final and the Draftstars Biggest Bash $150,000 Live Final! Thanks to all who subscribed to our YouTube channel and for all the great feedback we received on Episode 1 – keep it coming!

Have you seen our BBL Resources section? Not only do we provide cheat sheets for the upcoming three matches, but we have a range of tools such as Points Against, Game Logs and Player Scores to make your Big Bash research even easier! With market leading information on the Big Bash we are proud to add it to our NBA offering as we continue to strive for the best DFS resources in Australia! 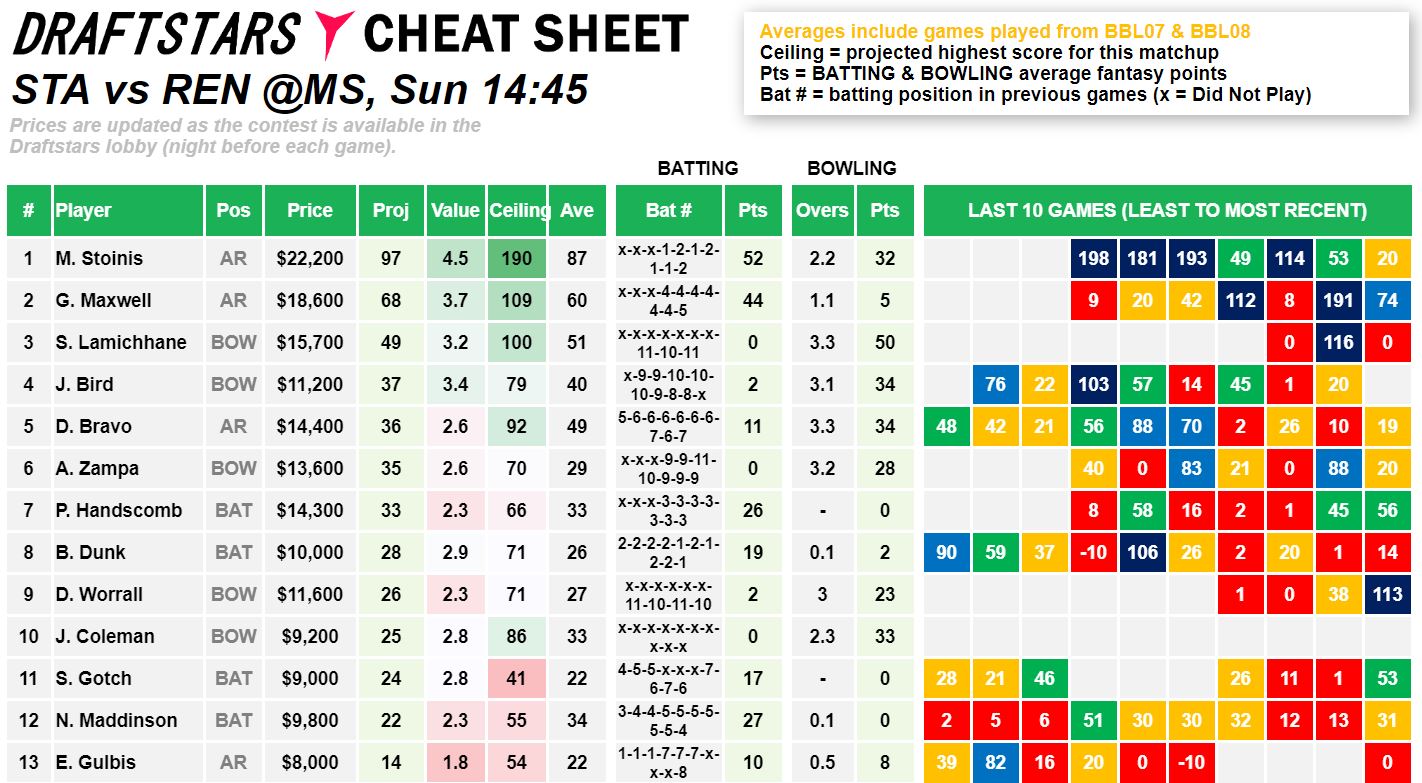 No surprise to see Marcus Stoinis ($22,200) as the most expensive player on the slate. His price has come down thanks to a vicious leg break from Qais Ahmad in Hobart and he was only required to bowl one over. As mentioned above however he has a pair of unbeaten 70s against the Renegades this season and will be licking his lips after seeing the better batting surface at Marvel on Friday night. His recent lack of bowling is a genuine concern at this price point and limits his upside but he is still a worthy play.

Glenn Maxwell ($18,600) has been taking the new ball to sneak a couple of overs in early in the innings and has been in excellent form with the bat. What bonus he provides with the ball is somewhat offset by his position in the batting order and he wasn’t afraid to send in Nic Maddinson ($9,800) above him when the situation dictated in Hobart. His strike rate is usually high which means his score adds up quick and if you fancy the Renegades to take a couple of early wickets then Maxwell is a fine option.

The Renegades batting lineup has been dominated by quick cameos rather than big scores so finding a reliable batting option has been difficult. Aaron Finch ($16,200) is always the obvious number one option and made 44 against the Sixers but still doesn’t quite look at his best. The man with the gloves Sam Harper ($11,900) should again be a solid option given his ability to score quickly as his quickfire 30s are enough to return value at his price and he can boost his score with a dismissal or two behind the stumps – if he manages to glove them better than he did on Friday night.

Cameron Boyce ($16,900) has been surprisingly good for the Renegades this season and has had an especially solid back end of the season. He has taken 2 wickets in 3 of his last 4 matches and did take 2/24 against the Stars earlier in the season in a crushing defeat. He has also shown improved ability with the bat when given the opportunity – something the brittle Renegades batting lineup sometimes provides.

He returned a big fat zero against the Hurricanes but Sandeep Lamichhane ($15,700) remains the leading bowling option for the Stars. He holds a superb 50 point average across the season and looks an obvious target given Steve O’Keefe’s success against the ‘Gades on Friday night. Hopefully his most recent performance will reduce his ownership somewhat as I will look to keep the faith in the right lineup builds.

Swing bowler Daniel Worrall ($11,600) flashed some enormous upside last game against the Hurricanes, taking 4/23 in a match-winning spell. He took a couple of games to get into his rhythm but his last couple of outings have been excellent and he is still available at a very reasonable salary. Being able to move the ball in the air may be a nice edge given how well the pitch played last game and he looks an obvious value option.