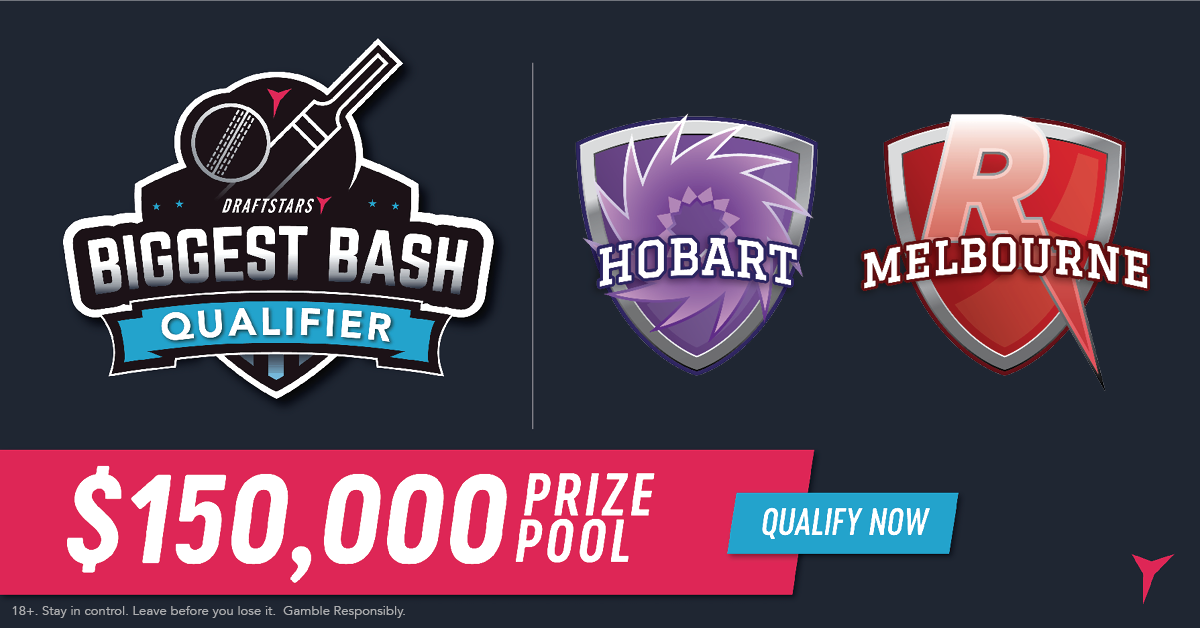 BBL08 returns after a short hiatus with a huge top of the table clash between the Hobart Hurricanes and the Melbourne Renegades at Blundstone Arena in Hobart. The Hurricanes look set to finish on top of the ladder but hit a hurdle in their most recent clash, losing to a rampaging batting display by the Adelaide Strikers in Launceston. The Renegades sit tied for 2nd at 8-5 after a 27 run win over the Thunder last time.

Last time these two teams played the Renegades inflicted the first defeat on the Hurricanes at Marvel Stadium with a 6 wicket win, despite the heroics of George Bailey’s 70 not out.

Riley Meredith returns to the Hurricanes squad as well as new international signing Qais Ahmad, a young leg spinner. Out of the squad goes Jarrod Freeman and James Faulkner, who is being rested. The Renegades welcome back Marcus Harris from the Australian side at the expense of Beau Webster. For more information on all of the players, read our pre-season squad profiles on the Hobart Hurricanes and the Melbourne Renegades.

Blundstone Arena provides some interesting stats in past seasons, with the highest boundary percentage across all venues but only average scoring numbers overall. Teams batting second have produced considerably higher batting figures, with an average scoring rate in excess of 0.7 runs per over higher. Whatever the reason for this, it may be worth keeping in mind when building lineups. The Hurricanes have successfully chased in all four games here this season which reinforces that theory.

From a fantasy perspective, bowlers have scored the least points here than on any other ground over the past two seasons, while batsmen have scored more points here than any other major ground. This also fits with the team-specific numbers for the Hurricanes – they allow more points to opposition batsmen than any other team in the comp, however they allow an incredible 83 points less than the average to opposition bowlers (stats from our BBL Resources Points Against page). 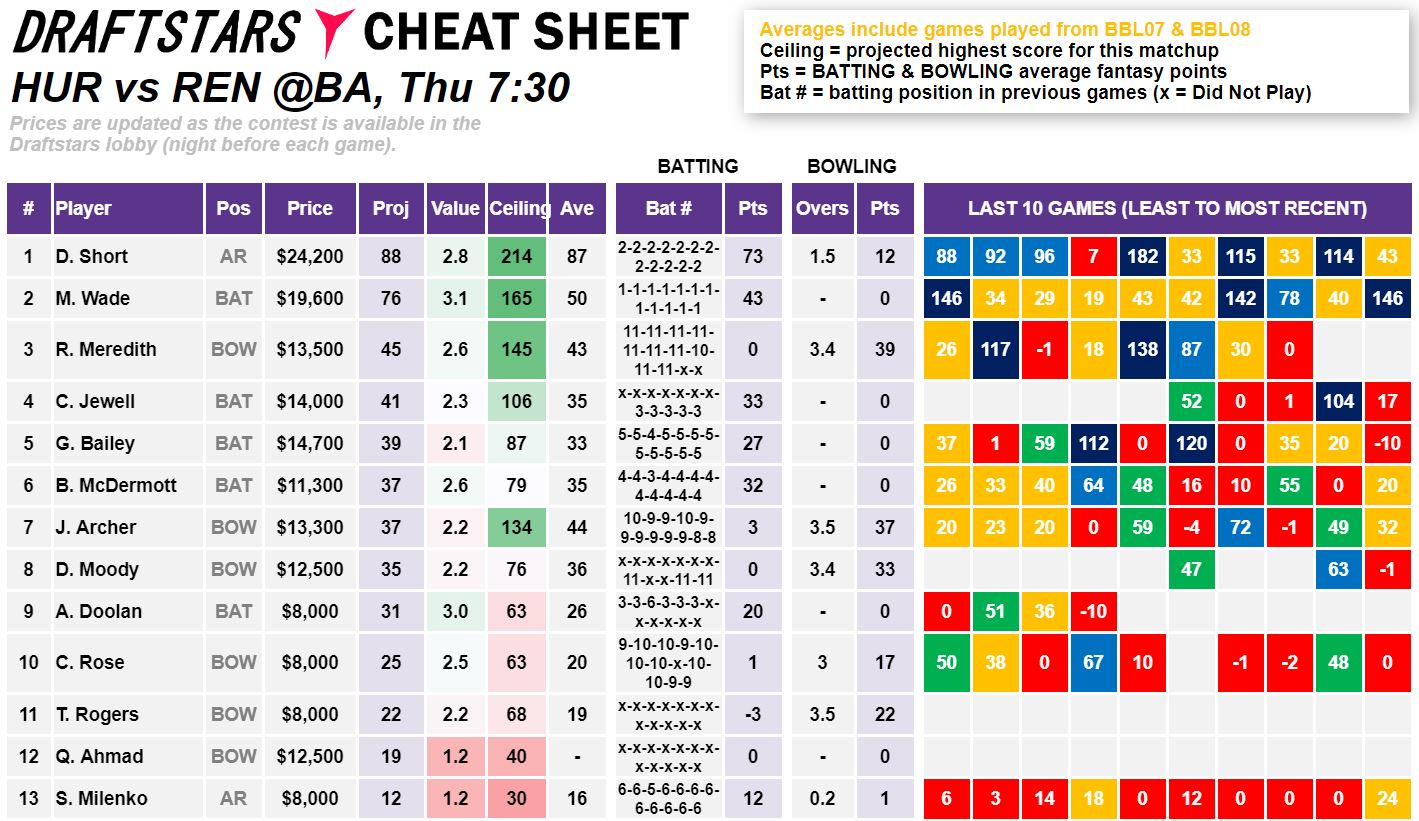 D’arcy Short ($24,200) and Matthew Wade ($19,600) have been an incredible opening partnership this season. While they both dominated the Strikers, generally it is one of the who goes on to make a big score and landing on that player is vital for winning contests in Hurricane games. Both failed when they last played the Renegades, which was the only time this season that has happened since Wade was moved to the top of the order, but expect at least one of these to bounce back with a big total.

Given the Hurricanes’ stingy record against opposition bowlers but the number of runs they leak to batsmen, targeting genuine batsmen rather than all rounders may be the play here. Aaron Finch ($16,800) may not be in the best of form but he is going to appreciate the true deck at Blundstone Arena and he made 42 against the Hurricanes earlier in the season. The obvious choice of the Renegades batsmen at a very reasonable price.

Ben McDermott ($11,300) has a disappointing run of scores but he has been starved of opportunity with the bat, failing to get a hit in 2 of his last 4 matches. Given the strength of the Hurricanes top order he is always at risk of getting little time at the crease but generally scores quickly once he gets going and has a range of scores between 30 and 64 which is a reasonable return at this price. One of the better value options on the slate but pay consideration to your lineup construction as the big Hurricanes guns can reduce his opportunity.

Riley Meredith ($13,500) returns to the Hurricanes’ squad after missing a couple of games through illness. On a relatively flat deck his pace has been a genuine asset which has assisted him to take multiple wickets in four matches. Opposition teams can get after him so he is a real risk of returning a zero but he has genuine upside at this salary.

Qais Ahmad ($12,500) is a super-intriguing prospect here. An 18yo leg spinner from Afghanistan, he has only played 24 T20 matches but has already impressed in the Caribbean Premier League and the international slow bowlers have dominated the BBL in the past couple of seasons. It may feel risky playing the youngster sight unseen but he arrives with a good reputation and may be worth the punt at this price.

Points have been hard to come by for visiting bowlers at Blundstone Arena so spending down at this position makes sense. Chris Tremain ($12,100) was superb in Perth with 3/9 off 4 overs but took some stick last time against the Thunder with 1/36. Back in 2016 at this ground Tremain was impossible for the Hurricanes to get away, taking 1/11 off 4 overs including a wicket maiden. Generally low owned and looks a nice point of difference while saving money for the best batsmen.