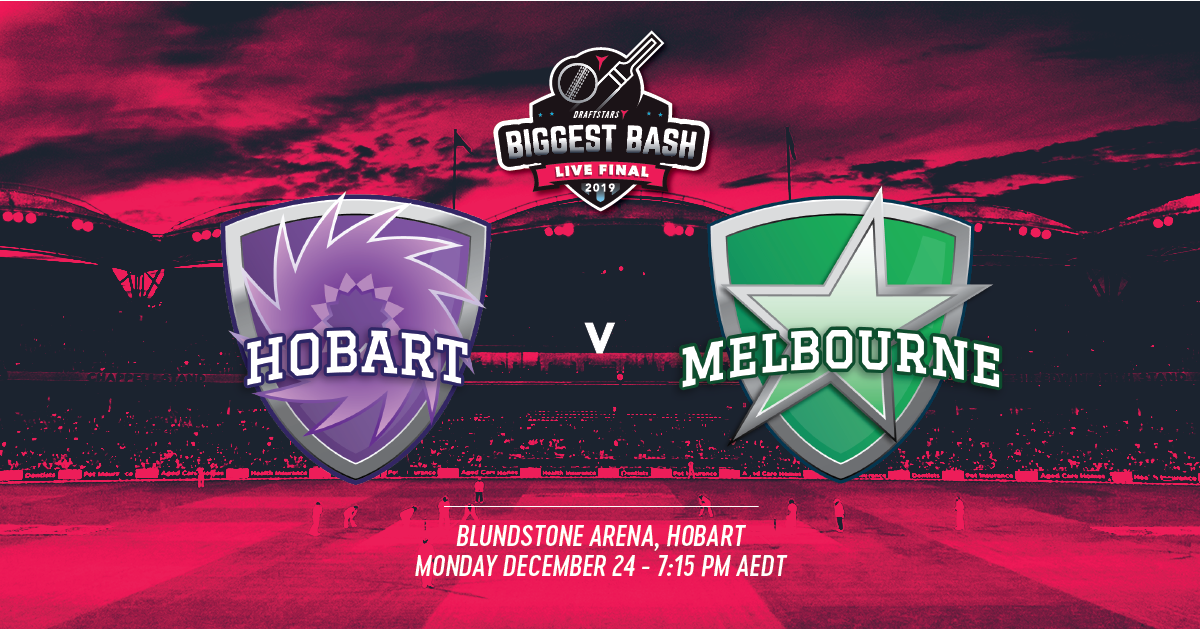 The Hobart Hurricanes return home after opening their BBL08 campaign with a win to take on the Melbourne Stars at Bellerive Oval. The Stars weren’t so successful, losing a rain-affected match against the Thunder, but they generally have a good record in Tasmania and these two teams have put on a show in the past.

We also have full profiles of the squads of all eight Big Bash teams, so you can read up on any of the Hobart Hurricanes or Melbourne Stars players you may not be familiar with prior to building your lineups.

Bellerive Oval provides some interesting stats in past games, with the highest boundary percentage across all venues but only average scoring numbers overall. Teams batting second have produced considerably higher batting figures, with an average scoring rate in excess of 0.7 runs per over higher. Whatever the reason for this, it may be worth keeping in mind when building lineups.

D’arcy Short ($24,600) comes up with the highest projected score in our cheat sheet, as you may expect for someone priced over $4,000 higher than any other player. With the lack of depth in the Hurricanes prices he is quite easy to fit into your lineups, especially Hurricanes leaning ones, and showed he is in great touch with a 52 ball 67 in the first game. He is generally high owned so there is value in trying to fade him but be aware he can put your team out of commission if he gets going.

Dwayne Bravo ($17,900) didn’t set the world on fire in his first outing for the Stars but with 1/28 and 11 off 8 deliveries he was still able to match his projection with a 57.75 score. Given Bravo’s upside is considerably higher than those numbers, he is actually very fairly priced and is the safest play of the expensive players in this match.

Matthew Wade ($12,300) missed out against the Heat but his price goes down accordingly and he will still benefit from his new role at the top of the order. In a match without many standout batting options, his class and experience stand out when compared to the Stars opening pair of Travis Dean ($13,000) (with limited T20 experience) and Ben Dunk ($13,500) (former tournament leading run scorer who is struggling to regain his old form). Keep the faith with Wade and hope to be rewarded at lower ownership.

James Faulkner ($12,500) has returned to his home state to join the Hurricanes and started in tremendous fashion against the Heat, picking up a couple of late wickets to finish with figures of 3/25. He is earmarked as the major death bowler for the ‘Canes, which will provide plenty of opportunity to take wickets, and he will be given the chance to add points with the bat given his reputation at the end of the innings. A couple of plain seasons has seen his price drop to a level which presents considerable upside, as shown by his 93 points last game.

Sandeep Lamichhane ($10,400) started his Stars career successfully by taking two wickets and a catch which returned 5x value on his price tag. His price hasn’t gone much higher so he ranks highly on our value numbers, at a price which will allow you to fit in some of the expensive batsmen. The Hurricanes lineup has been vulnerable to spin in the past also, so you may look to pair him with Adam Zampa ($12,400), the Australian T20 leg spinner who impressed with 2/23 in opening match.