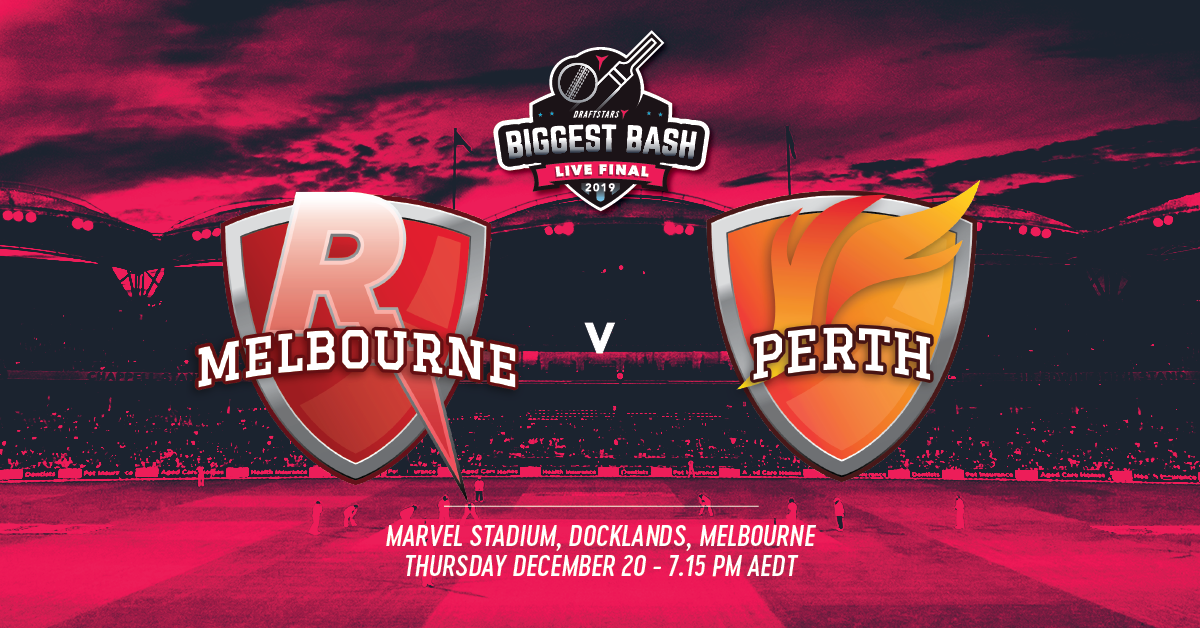 Game 2 of BBL08 season takes place on Thursday night with the Melbourne Renegades kicking off their campaign at their home ground Marvel Stadium at Docklands against perennial power Perth Scorchers. As with every game of the home and away season, you can win entry to the first live final in Australian DFS history to compete for a $50,000 first prize with the Draftstars’ “Biggest Bash” Contest.

We also have full profiles of the squads of all eight Big Bash teams, so you can read up on any of the Melbourne Renegades and Perth Scorchers players you may not be familiar with prior to building your lineups.

Marvel Stadium (Docklands) ranks around average for runs per wicket and runs per over among all of the BBL grounds and has a reputation of favouring those who can take pace off the ball. Interestingly teams batting first have a considerably better record when it comes to runs and strike rate so conditions tends to be better earlier in the game which may be worth keeping in mind when building your lineups.

Mitch Marsh ($18,700) presents as an obvious option at the top of the projections for Perth. He is one of the key batsmen in this Scorchers side, capable of making big scores or scoring at a high strike rate with a mean of 158 across the past two seasons. He also gives you the back up bowling option if he fails with the bat and can chip in with a wicket, although his economy rate doesn’t usually lend itself to bonus points. He looks the best batting option from Perth.

With Aaron Finch and Marcus Harris unavailable for the Renegades, it presents an interesting opportunity at the top of the order for Jack Wildermuth ($11,500) and Tim Ludeman ($12,300). Both have been earmarked for further opportunity, with Wildermuth also providing extra value as a wicket-taking bowler, while Ludeman has shown hard-hitting talent in a former life with the Strikers. Keep a close eye on the team announcements because these two have the scope to out-perform their price tag if unleashed at the top of the order.

If Josh Inglis ($10,200) gets the nod to take the gloves and open the batting as has been predicted in some circles then he gets the opportunity to out-perform his low projection. He has batted down the order in his short BBL career so far but has shown ability opening the batting in the JLT Cup with an impressive 64 against Victoria off 68 balls. Keep him in mind as a cheaper option if he gets the call up.

Mohammad Nabi ($18,200) had a great first season in Australia in BBL07, taking 8 wickets in his 7 games as well as averaging 29 with the bat at a strike rate near 140. His hitting is sure to be useful in a team lacking a couple of front-line batsmen, to add to his fantastic off-spin bowling. He may be expensive but he still projects as our favourite value play on proven form.

All-rounder Ashton Agar ($17,300) has been excellent for the Scorchers in the past couple of seasons and this is reflected by his projection, which is the second-highest for the Scorchers side. Agar has taken a short break from first-class cricket recently which should see him refreshed and ready to attack this BBL08 season. He mentioned in a recent interview he is targeting a move up the batting order which would provide further opportunity to perform above his projection so keep an eye on his batting position when team lineups are announced.