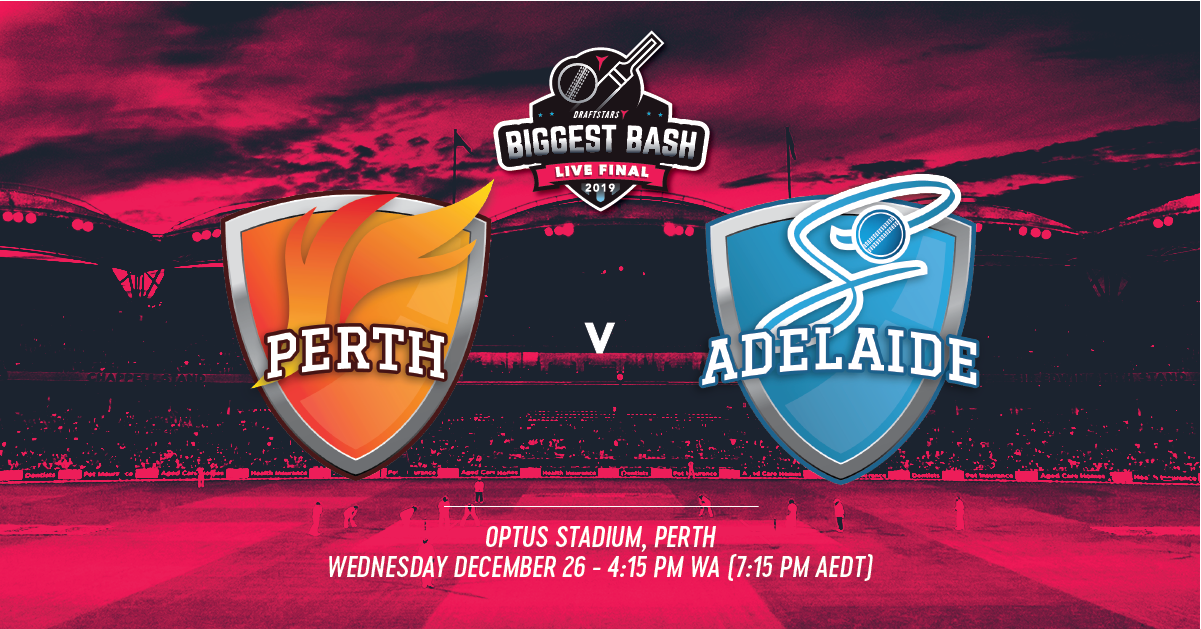 BBL08 returns on Boxing Day for the first game out west of the season which sees the Perth Scorchers host the Adelaide Strikers at the new Optus Stadium. The Scorchers will be desperate to open their account after losing two away games to start the season, while the Strikers dropped their first game at home to the Renegades on Sunday night.

We also have full profiles of the squads of all eight Big Bash teams, so you can read up on any of the Perth Scorchers or Adelaide Strikers players you may not be familiar with prior to building your lineups.

There has only been one BBL game at Optus Stadium, which was the semi-final last season. The Hurricanes exploded with 210 batting first and never looked like losing, which was in stark contrast to the typical low-scoring matches the Scorchers were renowned for winning at the WACA. Making conclusions off the smallest possible sample size would be folly, but it is worth keeping in mind that the famous Scorchers home ground grind may not translate to the new stadium.

Both teams have been a bit short on batting so far this season, especially the Scorchers. The skipper Ashton Turner ($14,300) moved up to no. 4 last match against the Strikers and enjoyed the time in the middle to knock up 49 off 39 balls. The strength of the Strikers bowling attack may see him get plenty of opportunity again and he rates as their best genuine batsman.

Strikers captain Colin Ingram ($10,900) was just getting started against the Renegades when he was dismissed for 21 off just 13 balls. Like Matthew Wade in Hobart, Ingram is priced too low for his ability and opportunity batting at no.3 so he is also worth playing while in this salary range.

With both teams possessing such strong lineups, you could argue that targeting the middle order batsmen is the right option. Players such as the in-form Jono Wells ($10,000), Hilton Cartwright ($14,800) and all-rounder Ashton Agar ($16,400) could find themselves in earlier than usual if the bowlers are on top early and this would give them ample opportunity to match their salaries. Group these players with some strike bowlers to get the best of both worlds.

He has increased again in salary but how can you go past Rashid Khan ($21,000)? He has been dominant in the opening two games, averaging 108 fantasy points, and once again he comes up top of both our Projection and Value categories. Steve O’Keefe had the Scorchers in all sorts with his spin last match and while they may be a different team playing at home, no one is hotter than Khan at the moment.

Jason Behrendorff ($12,500) looks to be regaining the form that made him a lethal weapon in Big Bash play before his layoff with injury. He has topped 64 points in both games this campaign, taking multiple wickets and earning an economy run bonus on each occasion. He is still very reasonably priced for a bowler of his quality and is a leading choice for your bowling attack.

Billy Stanlake ($12,700) is a wicket taker but his economy has been atrocious in the first two games, topping 10 runs per over in both games. His saving grace has been taking multiple wickets in each game and he is a bowler who has major upside when things click. He remains a viable play at this price point.