The semi finals of BBL08 are finally here! The Hobart Hurricanes host the first final on Thursday night against the Melbourne Stars at Blundstone Arena. The Hurricanes have had a sensational tournament to finish clearly on top of the table despite losing their last roster match against the Thunder. The Stars had to win their last game against the Sixers to qualify and win they did, knocking them over for 74 after Glenn Maxwell’s 82 off 43 balls got them to 6/168.

The Hurricanes make one big chance to their squad for this final with leading pace bowler James Faulkner returning to the side after resting his troublesome knee, replacing Tom Rogers. Nick Larkin has returned to the squad for the Stars, replacing paceman Jackson Coleman. Learn more about the players from each side in our pre-season squad profiles on the Hobart Hurricanes and Melbourne Stars.

These two teams have played each other twice through the regular season, with the Hurricanes successful on both occasions. Early in the season the Hurricanes won comfortably at Blundstone by 6 wickets against a reasonably strong Stars side, although Marcus Stoinis was yet to be unleashed at the top of the order. The other game at the MCG holds little relevance as the Stars team was decimated, with D’arcy Short’s 96* leading the Hurricanes to a 59 run win. Excitement is building for the Draftstars Biggest Bash $150,000 Live Final and all the qualifiers will be tuned in to see which of these teams makes Sunday’s all-important BBL08 final!

Blundstone Arena provides some interesting stats in past seasons, with the highest boundary percentage across all venues but only average scoring numbers overall. Teams batting second have produced considerably higher batting figures, with an average scoring rate in excess of 0.7 runs per over higher. Whatever the reason for this, it may be worth keeping in mind when building lineups. The Hurricanes have successfully chased a number of times this season which reinforces that theory.

From a fantasy perspective, bowlers have scored the least points here than on any other ground over the past two seasons, while batsmen have scored more points here than any other major ground not named the Gabba. This also fits with the team-specific numbers for the Hurricanes – they allow more points to opposition batsmen than any other team in the comp, however they allow an incredible 77 points less than the average to opposition bowlers (stats from our BBL Resources Points Against page).

Daily Fantasy Rankings are proud to debut our new show “DFS Down Under”! Join Luke “Smatho10” Mathyssen and Tristan “BigHef” Heffernan as they run through the major talking points for the two semi finals, and discuss the upcoming Draftstars Biggest Bash $150,000 Live Final! We plan to feature a lot more video content this year, especially as we get into the AFL season, so be sure to subscribe to our YouTube channel and give us your feedback! 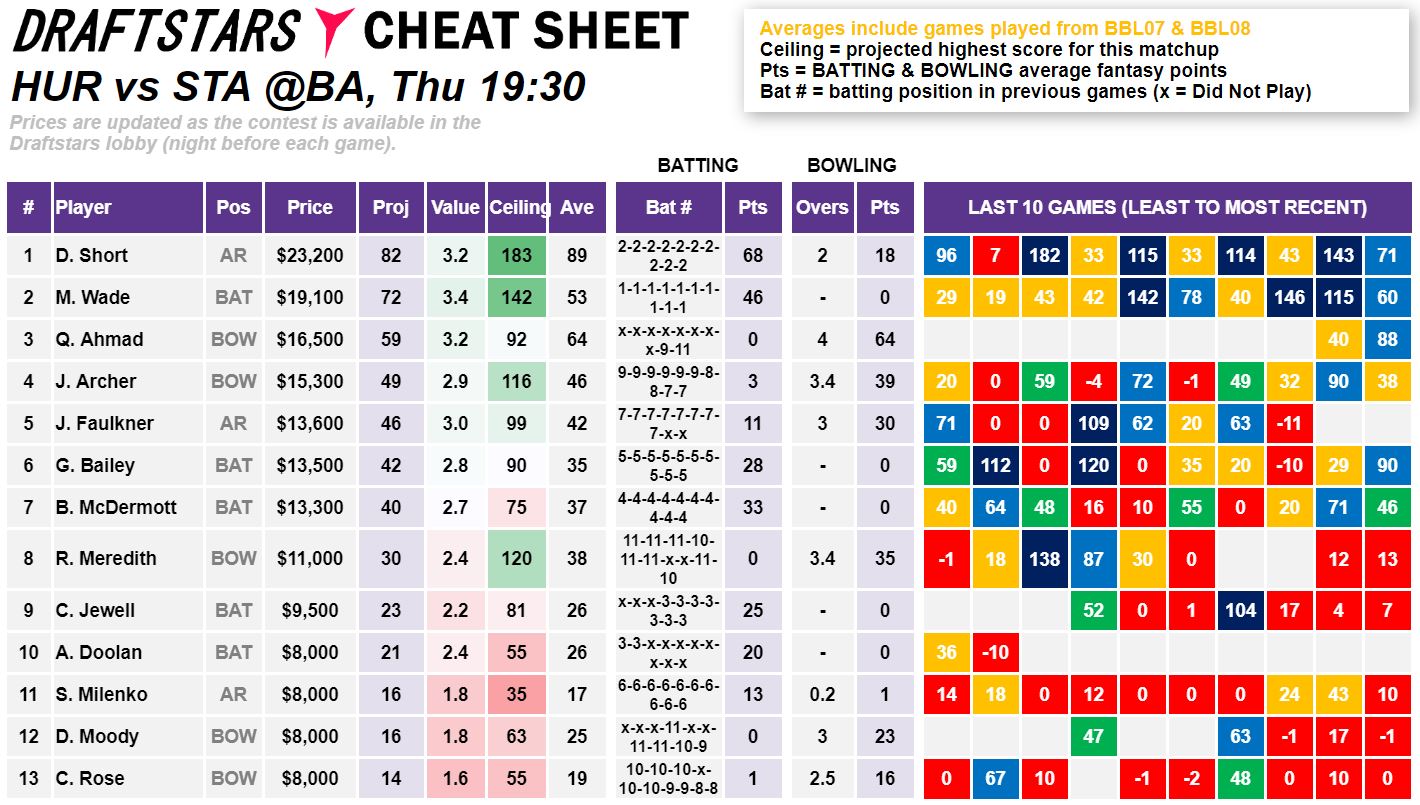 D’arcy Short ($23,200) is the most expensive player on the slate but for good reason. He loves playing on his home ground and when he has missed out with the bat he seems to get into the game with the ball to make up his lost fantasy points. With six scores of 71 or more in his past 10 matches his consistency is superb and he is well worth playing once again.

Glenn Maxwell (18,600) showed exactly what he is capable of against the Sixers with a stunning 82 which led to a massive 191 fantasy points. While he doesn’t get the same amount of opportunity at the bowling crease as Short and Stoinis, he can chime in with a wicket or a tight over, and he was impressive earlier in the season at this ground when he made a slashing 47. His price is high given his spot in the lineup but he looks a great pivot if you want to fade Stoinis, or you can pair them up in a Stars stack.

Youngster Caleb Jewell ($9,500) has been feast or famine in his short career so far but did impress in a game here against the Heat with 61 off 38 balls. If you want to include the big guns in your lineup you are going to need to trade down somewhere and the point in favour for Jewell is the fact he gets opportunity at the crease batting 3 that the middle order players don’t necessarily get given the batting dominance at this ground. No doubt a risky play, but one who unlocks salary if you are keen to play the big guns.

Marcus Stoinis ($22,200) has been a total beast for the Stars since opening up the batting with his last seven matches resulting in four fantasy tons and a low score of an incredible 49. Like Short, he is very capable with the ball which can either salvage a short innings with the bat or turn a big fantasy score into a huge one. Expect a lot of teams to try and fit both Short and Stoinis into their lineups so the contrarian play is to try and take one (or both!) on, but Stoinis’ consistency does make that a risky option.

A well-rested James Faulkner ($13,600) returns to the fray here and will be raring to go to lead the attack into the Grand Final. A highlight of Faulkner’s season has been his ability to take multiple wickets which he has done on seven occasions, and would be enough to return value at this price. Faulkner has been rather successful at removing batsmen early in the innings so keep that in mind for the lineups you play him in.

Sandeep Lamichhane ($16,000) has been brilliant this season for the Stars with a superb 60 point average and wonderful consistency across his six games. The abomination against the Heat was the only game he hasn’t taken a wicket and he was most impressive in a losing side at this ground earlier in the year when he took 3/24 off his 4 overs. Paying up for bowlers isn’t a great strategy at Blundstone but given he has performed well here previously, he may provide a point of difference at this salary.