The second semi final in BBL08 takes place on Friday night with the Melbourne Renegades hosting the Sydney Sixers at Marvel Stadium. The Renegades have had a week off since they lost by 16 runs in Hobart to finish their regular season. The Sixers were sitting 2nd and only had to make things close against the Stars to host this final, but they got rolled for 74 in disasterous circumstances and now have to make the trip to Marvel.

The Renegades have brought back experienced batsman Cameron White to replace Mohammad Nabi, who has left to represent Afghanistan in their series against Ireland. The Sixers have brought in Ben Manenti and Justin Avendano to replace Tom Curran, who leaves to fulfil commitments with England, and Lloyd Pope. Learn more about the players from each side in our pre-season squad profiles on the Melbourne Renegades and Sydney Sixers.

These sides have been involved in two low scoring contests this season with bowlers dominating. In their first clash the Sixers made just 7/132 here at Marvel, but responded by restricting the Renegades to 9/99. The Sixers struggled again with the bat when they played at the SCG, making 9/115, but the Renegades were much better in reply, passing the score only 3 wickets down. Qualifiers for the Draftstars Biggest Bash $150,000 Live Final will be watching intently to see which team wins to take their place in the Grand Final!

Marvel Stadium has been extremely hard work for batsmen this season. No team has scored more than 150 runs and as per our BBL Resources Points Against page, the average total fantasy score for batsmen per team comes in at only 161, which is clearly the lowest of all the BBL venues. On the flip side, bowlers – especially pace bowlers – have dominated in all matches and the average total fantasy score of 240 is far higher than at any other venue. The obvious play off these figures is to play more bowling options in your lineups than usual.

Daily Fantasy Rankings are proud to debut our new show “DFS Down Under”! Join Luke “Smatho10” Mathyssen and Tristan “BigHef” Heffernan as they run through the major talking points for the two semi finals, and discuss the upcoming Draftstars Biggest Bash $150,000 Live Final! We plan to feature a lot more video content this year, especially as we get into the AFL season, so be sure to subscribe to our YouTube channel and give us your feedback!

Have you seen our BBL Resources section? Not only do we provide cheat sheets for the upcoming three matches, but we have a range of tools such as Points Against, Game Logs and Player Scores to make your Big Bash research even easier! With market leading information on the Big Bash we are proud to add it to our NBA offering as we continue to strive for the best DFS resources in Australia! 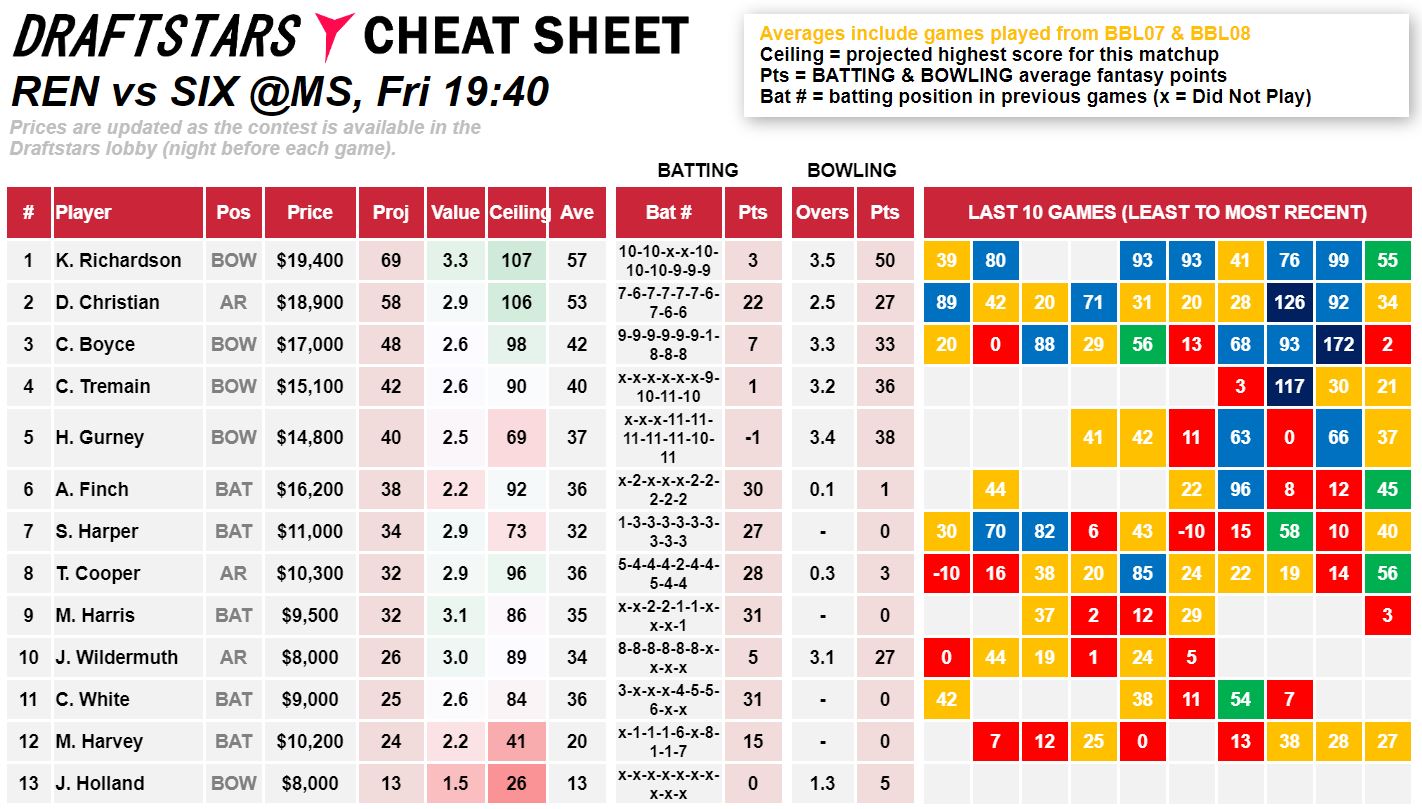 Is it time to show faith in Renegades captain Aaron Finch ($16,200)? He has been out of form recently and his scores reflect that, but he has had a week off to freshen up and set himself to lead the side into a Grand Final here. Big scores from batsmen have been few and far between but Finch looks to have the most upside of the genuine batsmen and did make 42 at this ground against the Hurricanes. A lot of teams will look to load their batting up with the bowling all rounders so you may get a rare chance to play Finch at very reasonable ownership.

Moises Henriques ($14,500) has had a mixed season so far but he has flashed big upside at this price a few times and batting down the order is often the best time to bat here at Marvel. Also in his favour is the fact the Sixers have only selected two pace bowlers – Henriques hasn’t been required with the ball too often this year and hasn’t done anything when he has, but there is no better spot for him to chip in with the ball than this. A risky selection but capable of being the point of difference who can win you a contest.

Jack Wildermuth ($8,000) hasn’t been seen for nearly a month in the Renegades side but with the loss of the all-rounder Nabi, he may get a look in here to maintain the balance. He is able to be picked as a batsman but will provide most value with the ball if given the opportunity, and twice took multiple wickets here earlier in the season. He can also make lower order runs so at minimum salary he has genuine upside.

Kane Richardson ($19,400) has had an unbelievable BBL08 season, taking 24 wickets including five 3 wicket hauls. His performances here at Marvel have been especially exceptional, taking multiple wickets in every game. He is priced up but has been Mr. Reliable all season and appeals as the leading pace option.

Sean Abbott ($17,300) has an uncanny knack for taking wickets – he has only gone wicketless once this season - and is left to spearhead the Sixers attack with the loss of Curran to the English side. Earlier in the season he took 2/16 off 4 overs here against the Renegades which would be a very solid return at this salary. He has also shown the ability to make runs down the order if given the opportunity – and that opportunity may well come if we get another dodgy Marvel deck.

Ben Manenti ($8,000) may not even find his way into the Sixers side but with Pope and Curran needing to be replaced, he may sneak a spot in the XI. His best performance of the season was here on debut where he took 2/13 off 4 overs which makes him an intriguing prospect here at minimum salary. Expect the Renegades to be better prepared for him this time around but the roster flexibility he provides does appeal, especially given he mysteriously still holds all rounder status.