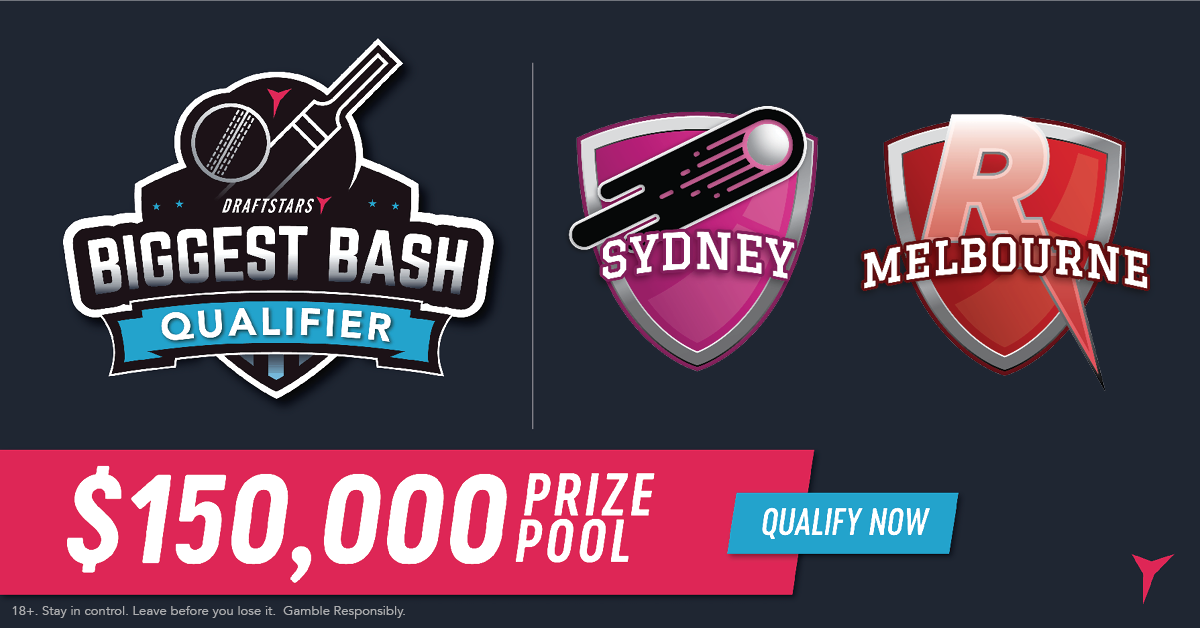 The Sydney Sixers finally return home in BBL08 after an extended series of games away to take on the Melbourne Renegades at the SCG. The Sixers put up a brave performance in Perth but fell victim to a masterclass from Bancroft and Turner to fall to 4-4 but they still sit inside the top 4. The Renegades also sit at 4-4 but a terrible batting display against the Thunder last game destroyed their net run rate which dropped them out of the top 4 so they will be desperate to get back in. These teams played earlier in the season at Marvel Stadium where the Sixers successfully defended 132, restricting the Renegades to 99.

The Sydney Cricket Ground is not your typical batsmen-friendly T20 pitch. The pitch is long renowned for being the friendliest to the spinners in the country, and the scoring on this ground is one of the lowest of any of the BBL grounds.  With boundaries harder to come by here than at any other BBL ground, playing extra bowlers – especially spinners – in your lineups can be valuable, and lower first innings totals means chasing teams can often cruise to victory with less risk. The Sixers were too good for the Scorchers in their first home game of the season, winning by 17 runs, but when they could only manage 130 against the Stars they lost convincingly.

Have you read our latest Biggest Bash qualifier interview? “Brento” came from the clouds thanks to a couple of big blows from Dan Christian to slide into 1st place and win a trip with the better half to Melbourne for the final!

Not sure who some of these players are? Check out our squad profiles of the Sydney Sixers and the Melbourne Renegades to make sure you are up to date before you construct your lineups.

Moises Henriques ($16,000) has started to find some form after a slow beginning to the tournament which was somewhat injury affected. He has scored 20 or more runs in four of his past five hits and encouragingly has started to bowl the odd over which gives further opportunity for fantasy points. He’s ready for a big break out innings and has plenty of upside at this salary.

He may have missed out last game but Sam Harper ($11,400) looks far too cheap given a few of his devastating innings so far this season. On four occasions he has scored 30 or more runs, all at a strike rate of 140 or above which makes for an excellent score at this price point. Given the added bonus of the gloves, he represents terrific value.

James Vince ($13,800) is the Joe Denly replacement and he got rid of a few cobwebs against the Scorchers with 28 off 25 balls. His high projection reflects his good performances last season with a median score of 31 across his 6 games so far and his strike rate of 136 provides a fantasy bonus. An experienced T20 player who is underpriced for what he is capable of.

Steve O’Keefe ($18,400) had an exceptional start to the season but the wickets have dried up in recent times. The key here could be the return to the SCG where he took 5 wickets and earned the full economy bonus across two games. His recent form might get a few off side at this high salary and provide a good opportunity to cash in on him back to his home deck.

Ben Manenti ($10,700) starred in his first game of the season against the Renegades on a slow pitch when he took 2/24 off his four overs. His scores since have been rather plain but he is another who will enjoy getting to the SCG which should suit his off-spin. His confidence will be high given his previous performance against his opposition and he looks enticingly priced.

Mohammad Nabi ($17,800) has been rather disappointing this season given his excellent previous showings in Big Bash cricket. His bowling has been below par, taking only 2 wickets as well as being quite expensive, with only a few good innings with the bat stopping his year from being a disaster. Could the slower pitch at the SCG kick start his season? He can potentially score in all four categories so his upside is nearly unmatched in this match and his ownership has come down to very manageable levels of late. If he rediscovers some of his old form, he could be the man to win you a BBL contest.