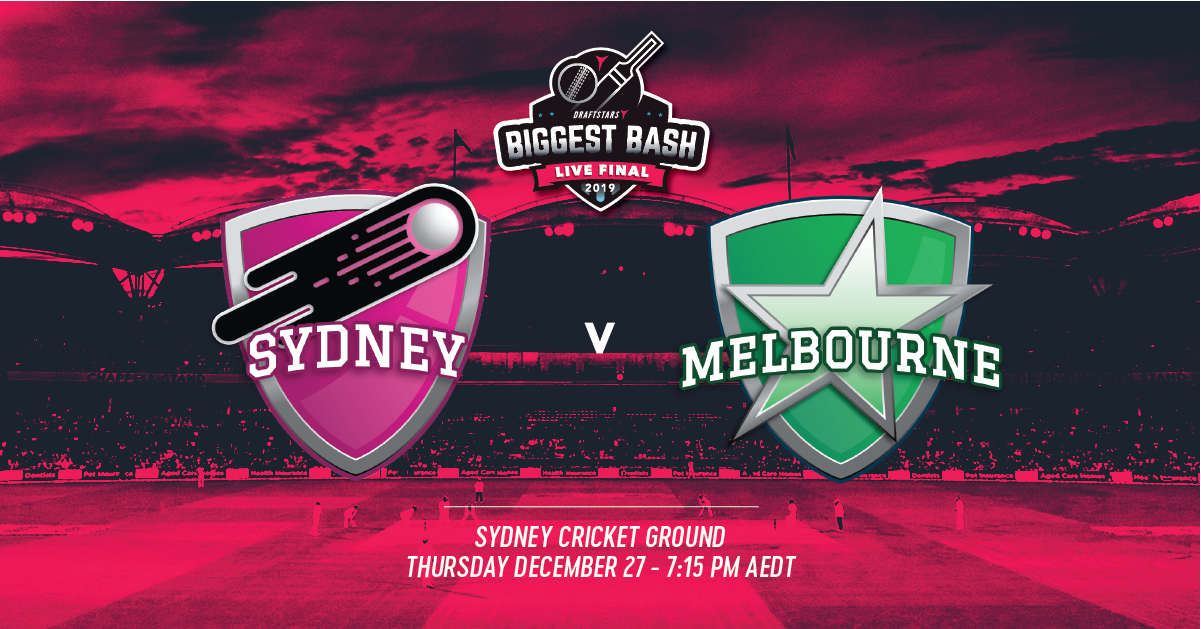 Thursday night sees BBL08 return to the Sydney Cricket Ground where the Sydney Sixers will host the travelling Melbourne Stars. The Sixers were game against the Thunder on Christmas Eve but never looked like chasing down their score, while the Stars also lost on Christmas Eve to the Hurricanes and slipped to 0-2.

We also have full profiles of the squads of all eight Big Bash teams, so you can read up on any of the Sydney Sixers or Melbourne Stars players you may not be familiar with prior to building your lineups.

The Sydney Cricket Ground is not your typical batsmen-friendly T20 pitch. The pitch is long renowned for being the friendliest to the spinners in the country, and the scoring on this ground is one of the lowest of any of the BBL grounds.  With boundaries harder to come by here than at any other BBL ground, playing extra bowlers – especially spinners – in your lineups can be valuable, and lower first innings totals means chasing teams can often cruise to victory with less risk. The Sixers were too good for the Scorchers in their first home game of the season, winning by 17 runs.

Glenn Maxwell ($17,600) started to get the eye in against the Hurricanes with a 31 ball 47 including five 6s. The other encouraging part of that match was the fact he was given two overs with the ball and one may expect him to get a couple of overs again on the SCG pitch. The slower conditions should suit him and he is a match-breaker who is worth paying up for.

Peter Handscomb ($8,000) drops back from Test duties to play his first BBL game this season and has come up on the minimum price. For a player of his quality he is clearly under-priced at this salary and is likely to come up as one of the highest owned players on this slate. However, his past two seasons have been quite plain, with an average of just over 15 and a median batting score of only 8. Obviously he is a fine play but there is enough value in the match that a low score would be costly, even at this low price.

With some plain efforts at the top of the order the Sydney Sixers batsmen are all attractively priced – Joe Denly ($15,400), Dan Hughes ($13,500), Moises Henriques ($12,500) and even young Jack Edwards ($9,000) are all priced well below their salaries for the first couple of games. Of these four only Hughes has put any scores on the board but all four get their opportunity at the top of the order and Denly can also bowl the odd over. All four project well at their price and have the upside to win you a big contest against a Stars attack which hasn’t set the world on fire so far this season.

A couple of these spinners have been dominant so far this season and their salaries have been heavily loaded. Steve O’Keefe ($19,400) has taken five wickets in two games and either game would have been acceptable at this high price tag but the pressure now goes on to take multiple wickets to justify his salary. The same goes for young Sandeep Lamichhane ($16,700) who has taken the same number of wickets and was very impressive in Hobart taking 3/24, but he now needs to take at least two wickets to return good value at his price. The usual SCG conditions will suit both bowlers but they will require more thought on how to include in your lineups compared to when they were far cheaper up until this point.

Tom Curran ($17,800) had an absolute monster of a game against the Thunder, taking 3/24 and then smashing 62 off 40 balls to record a whopping 181.5 points. A top order collapse gave him opportunity with the bat he otherwise wouldn’t get and he did score -1 in his first game of the season so it would be folly to fall in love with this most recent performance.  At a much higher price this time it may be wise to limit the amount of exposure you have as he should remain batting in the lower order.

Dwayne Bravo ($15,400) can be selected as a batsman or a bowler and has taken a dive in price after a poor showing in Hobart. He is yet to make an impact on this season but has years of excellent performances behind him and if he gets going he can score well enough with bat or ball to return value at this price. Should he produce his best in both disciplines, his upside is enormous and one which can win you a major contest.