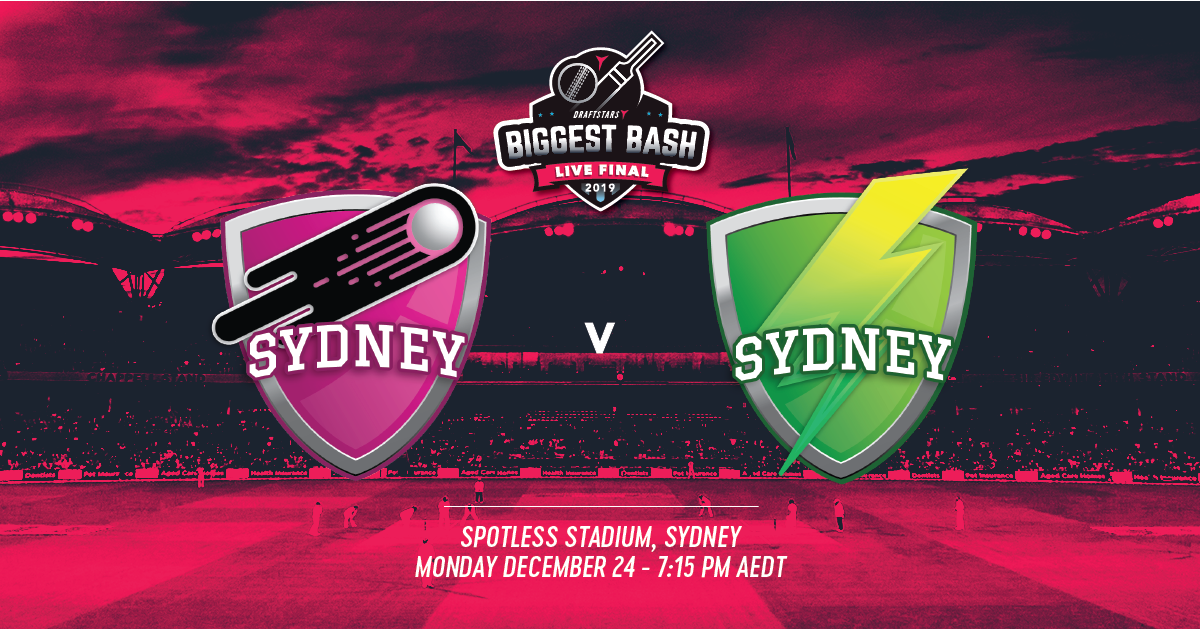 The Sydney Thunder and the Sydney Sixers both won their first BBL08 matches this season which sets up a great Sydney derby on Christmas Eve at Spotless Stadium. The Thunder were too good for the Stars in a match affected by rain, while the Sixers were impressive against the Scorchers, handing them their second successive loss.

We also have full profiles of the squads of all eight Big Bash teams, so you can read up on any of the Sydney Thunder or Sydney Sixers players you may not be familiar with prior to building your lineups.

Spotless Stadium is one of the lowest-scoring venues in the country when it comes to BBL, producing the second-lowest runs per wicket and lowest runs per over figure of all the major grounds. Batting first has often been an advantage as the pitch can slow up as the match wears on and the figures back that up, so targeting batsmen early and bowlers late in the game may have some merit.

The Thunder have some genuine firepower at the top of the order and Shane Watson ($18,200) and Jos Buttler ($17,000) are quite fairly priced given their ability to go big. Both made a start in their first match, making 22 and 20 respectively at better than a run a ball, and have multiple half-centuries in the past two seasons. They may be expensive but get to bat against the ball at its hardest which can be the best time to bat at Spotless Stadium.

Moises Henriques ($14,700) is worth talking about predominantly due to the injury he suffered against the Scorchers. According to the Sixers he will take part in a late fitness test, given he didn’t field during the Scorchers’ run chase. Be sure to keep an eye on team announcements 30 minutes before the game starts, but if he is hampered by calf pain he may be slightly below his best and a tough player to roster on that basis.

Daniel Hughes ($19,000) has paid the price for his consistency over the past couple of years to end up with a high price tag but scored an excellent 62 off 44 balls against the Stars. His batting position of no. 4 was a little concerning given his usual role opening the batting, but should Henriques not come up he may move up to no. 3. He has a relatively low profile so ownership at this price tag should again be low, but his role of batting through the innings gives him a higher floor than someone keen to get after the bowling from the outset.

How could any preview be complete without mention of 19yo Jason Sangha’s ($11,300) stunning debut knock of 63 off only 36 balls, including four 6s. He was given plenty of opportunity at no. 5 and belied his age with a match-winning innings when the game was in the balance. His upside is obviously excellent given his 122.5 point score but he strikes different batting conditions here and one would expect his age to bring inconsistency. With that one game average standing out on the Draftstars team selection page, thought should be given towards fading what might be a high ownership figure.

Daniel Sams ($12,000) put on a total clinic in Canberra when he followed up a hard-hitting unbeaten 34 at no. 6 with 3/5 off 2 over for a massive score of 148. Clearly his bowling was suited by the bash and crash nature of an 8 over innings but his variation was impressive and the fact he faced 21 balls with the bat was also very encouraging for a bowler. Expect high ownership off that Thunder debut performance but he will be fired up against his former side and his price is still too low given his all-round capabilities.

Steve O’Keefe ($11,600) was identified as an excellent value play for the match against the Scorchers and he delivered, taking 3/19 to score a massive 115 points. His salary has risen by $900 for this match but his upside is proven and it is worth noting the Thunder lost four of their five wickets to the spinners in their game against the Stars. In-form at a low price and suited by the slower pitch – what’s not to like?

Fawad Ahmed ($14,000) didn’t get a bowl in the Thunder’s first game, assumedly due to the rain in the shortened match, but remains at the top of our Thunder projections. His leg spin is perfectly suited to the Spotless Stadium pitch, which can be on the slow side and favourable to the turners. He has averaged over a wicket per match over the past two seasons and his median economy rate of 6.75 brings an economy rate bonus more often than not. His failure to score in game 1 may reduce his ownership but rest assured he will be one of the keys to the Thunder’s chances here.