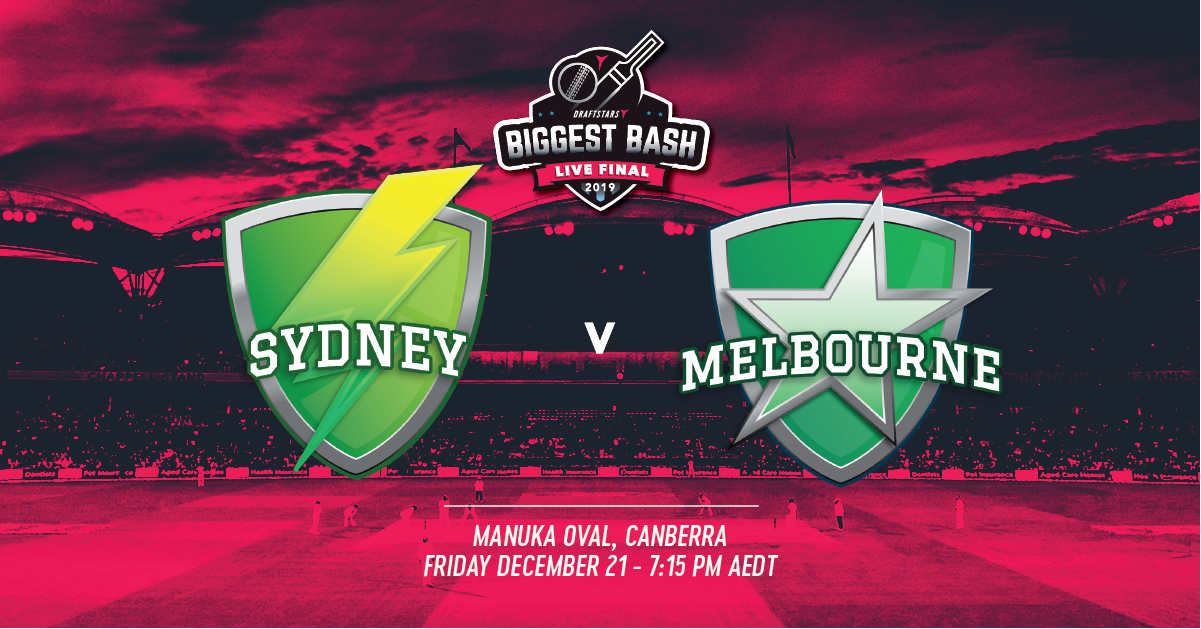 BBL08 action moves to Manuka Oval in Canberra on Friday night where the Sydney Thunder will begin their season by hosting the Melbourne Stars. As with every game of the home and away season, you can win entry to the first live final in Australian DFS history to compete for a $50,000 first prize with the Draftstars’ “Biggest Bash” Contest.

We also have full profiles of the squads of all eight Big Bash teams, so you can read up on any of the Sydney Thunder and Melbourne Stars players you may not be familiar with prior to building your lineups.

Manuka Oval in Canberra only hosted the one match last season which saw the Melbourne Renegades successfully defend 189 against the Thunder by nine runs in a high scoring clash. The match featured a massive 20 sixes – the fourth highest tally in a match in the past three seasons of the Big Bash – so those who can take the aerial route will get every opportunity to do so.

Shane Watson ($18,600) needs no introduction to cricket fans and will be the key to the Thunder’s chances again this season. He is capable of producing a match-winning innings at the top of the order and has a knack for picking up a wicket with the ball, averaging nearly a wicket per innings across the past two seasons. In a match offering plenty of value, his propensity for a big score can offset his expensive price tag.

At the top of the projections is the quality West Indian all-rounder Dwayne Bravo ($17,400), who makes his debut for the Stars after playing for cross-town rivals Melbourne Renegades in previous seasons. Bravo has averaged a league-best 1.54 wickets per game across the past two seasons, earning bonus points with three three-wicket hauls, including a five-wicket display against the Hurricanes. He should also get plenty of opportunity with the bat in a brittle Stars top order and holds obvious appeal at a reasonable price.

Speaking of opportunity, Callum Ferguson ($12,200) has been batting higher up the order in the warm-up games and produced two half-centuries against the Sixers batting at no. 3. Historically he has batted lower in the order in recent seasons so he may outperform his price tag and middle of the road projection with more time at the crease. Form and opportunity make him an intriguing play at this price point.

The key to the Thunder bowling lineup is their spinners and their three front liners look reasonably priced here – Fawad Ahmed ($14,500), Chris Green ($14,800) and Arjun Nair ($13,400). All three come up high on the projection model as they can restrict runs as well as take wickets and Green and Nair can also chip in with valuable runs when the Thunder top-order fails – as they are prone to doing. Although you can fit all three in your lineup with Green and Nair holding dual position, it may be better to roll these out in groups of two through your teams so your upside isn’t limited.

Sandeep Lamichhane ($10,100) is a name which will only be familiar to the most ardent of Australian cricket followers but that is likely to change after his debut season with the Stars. International spinners have performed exceptionally in recent seasons and this 18yo from Nepal has made an excellent start to his career. He averages over a wicket a game at an economy rate just above 7 so he is capable of scoring points in both of the major bowling categories.