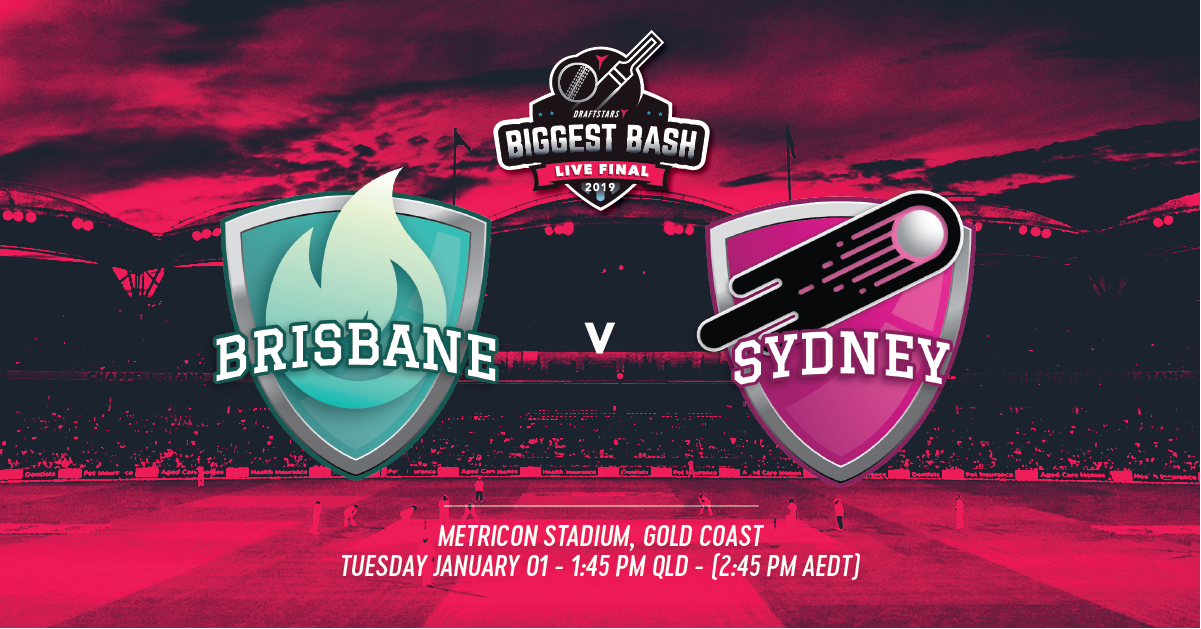 The Brisbane Heat are almost the forgotten side of the BBL08 season given they haven’t played since the 21st of December, but they are back on deck on New Year’s Day with a home game at Metricon Stadium against the Sydney Sixers. The Heat have lost their first two games rather convincingly, while the Sixers’ season is in the balance at 2-2 after bouncing back to beat the Renegades on Saturday night

New to Big Bash DFS? Picking the right games to play is a vital skill in wining yourself some cash. There are a number of sites offering a wide range of contests so we have an article breaking down all the contests on offer.

We also have full profiles of the squads of all eight Big Bash teams, so you can read up on any of the Brisbane Heat or Sydney Sixers players you may not be familiar with prior to building your lineups.

Metricon Stadium on the Gold Coast is better known as an Australian Rules Football ground and the host venue of the Commonwealth Games. While this is just the second Big Bash game played at the venue, it hosted an international T20 match between Australia and South Africa last month. The match was rain-affected so a 10 over a side match didn’t provide a great guide, but the curator was quoted pre-match as looking to produce a similar track to the Gabba. The Hurricanes put up 159 in 19 overs at this ground back in game 5, which was 15 runs too many for the Heat to chase down.

The bash brothers Chris Lynn ($22,300) and Brendon McCullum ($15,600) are always the first port of call when looking at the Heat lineup but both have been a bit underwhelming so far. Lynn has looked the most likely with knocks of 33 and 29 whereas McCullum has missed out both times with two scores of 4. Lynn looks ready to rip a game apart and is worth paying up for in comparison to McCullum, who is capable of the match winning innings but at the age of 37 looks to be slowing down and is clearly prone to a lineup killing score.

The Sydney Sixers top order is quite out of touch recently but have been dealing with some bowler-friendly pitches. They should relish the better batting conditions at Metricon and all are priced down after indifferent performances this season. Joe Denly ($13,700), Jack Edwards ($8,000), Daniel Hughes ($10,800) and Moises Henriques ($9,900) are all in play at these salaries which open up plenty of room to fit the expensive bowlers into your lineup. Forced to pick one, I think Hughes can bounce back and is the most likely to make a big score but I’ll be keen to have plenty of exposure to all four across my lineups at these prices.

Max Bryant ($10,500) is a powerful young opening batsmen who has got a start in both games and showed what he is capable of against the Hurricanes with a whirlwind 30 off 15 balls. An innings like that is enough at his low salary and he may still sneak under the guard of the field as he isn’t a well known player just yet. He is definitely worth a place in some of your lineups.

Sean Abbott ($16,800) can be erratic with the ball but there is no doubting his ability to take wickets. He has taken 6 wickets across his four games and with the Sixers batting woes he has also been able to chip in with the bat down the order, hitting a 6 in his past three games. His price tag means his ownership will be on the low side but the quicker pitch suits him, as shown by his 3-38 in this fixture last year at the Gabba where he claimed the prized scalps of both Lynn and McCullum.

James Pattinson ($14,200) took 2/23 at this ground in his first outing for the Heat before missing last game to attend Adelaide Crow Tom Lynch’s wedding. He is obviously suited to the harder decks up in Queensland and with the Sixers top order struggling for confidence he gets his chance to rip through with a couple of early wickets. This play brings genuine risk as his economy rate across the past two seasons is up over 11 so a zero is in play, but in this spot he has the upside you need to win a GPP.

Mujeeb Ur Rahman ($11,800) has made a great start to his Big Bash career, earning bonus economy points in both outings with the ball and he took two important wickets against the Hurricanes. His tight bowling should see him in the mix for the economy bonus more often than not, meaning any wickets bring his upside. Being new to BBL08 his salary is yet to catch up to where it probably deserves to be so you can cash in on him again here.