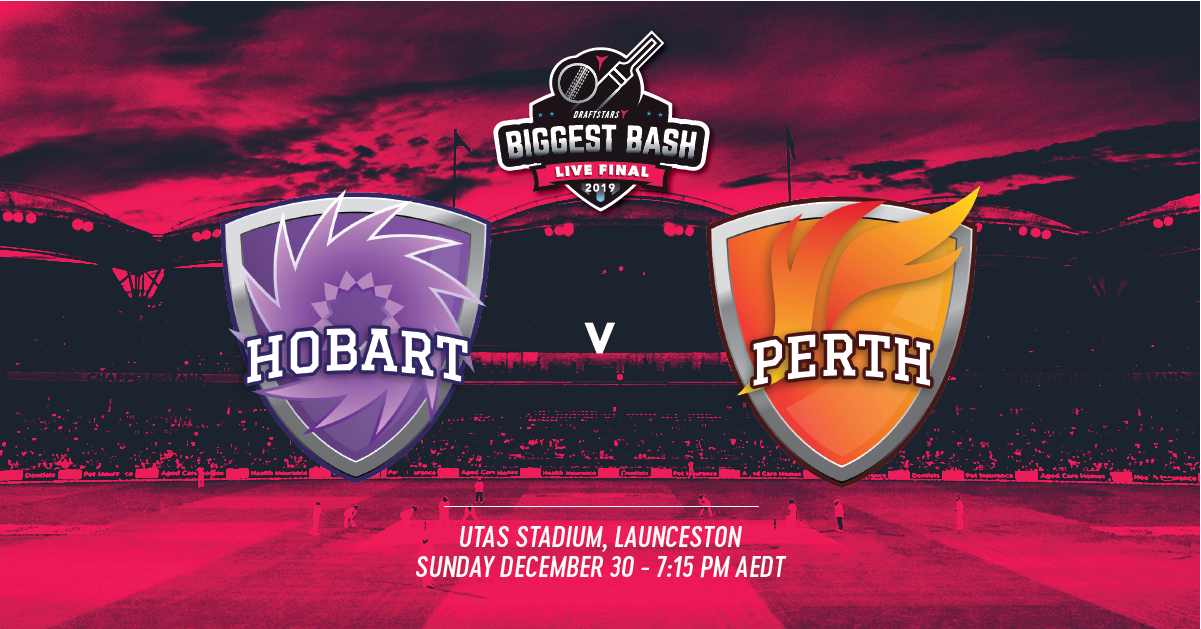 BBL08 travels to UTAS Stadium in Launceston, Tasmania on Sunday night where a red-hot Hobart Hurricanes team hosts the Perth Scorchers. The Hurricanes chased down 193 on Friday night to beat the previously undefeated Sydney Thunder, while the Scorchers got their season on track back at home with a dominant win over the Adelaide Strikers. With both teams coming here in good form this is sure to be a ripping contest.

Not familiar with some of these newer names? Check out our profiles on the Hobart Hurricanes or Perth Scorchers to get all the info you need before building your lineups.

We have only seen one game at UTAS stadium previously in the Big Bash, with the ground better known as the Tasmanian home of the Hawthorn Hawks in the AFL. Last year the Thunder easily defended 166 against the Hurricanes with the match featuring an extremely low boundary count. One may expect scoring to be low if similar conditions prevail so leaning to the bowlers might be the smart DFS play.

The pricing algorithm has really caught up with the star opening partnership for the Hurricanes, D’arcy Short ($26,200) and Matthew Wade ($19,600). On one hand, they are clearly the form batsmen for the Hurricanes and both have the upside even at these high prices, with Short topping 85 in all three games this season while Wade had a massive 145 last game. On the flip side, they are sure to be extremely popular for that reason but now come up against possibly the best bowling attack in the comp on a ground which was hard to score on last season. Obviously hard to fault playing them, but if you were ever going to fade these two, maybe today is the day?

If you do look to play the expensive bowlers and fade the big guns at the top of the order, then you have plenty of value options. Ben McDermott ($11,300) is priced right down but still has an average of 33 this season and would have to shoulder more responsibility were a couple of early wickets to fall. George Bailey ($10,200) looked in good nick when he finished off the match on Friday night and he also comes under consideration if you predict early wickets to fall as he has a cool head on his shoulders.

Cameron Bancroft ($12,300) makes his long-awaited return after being caught with sandpaper in South Africa. He is very fairly priced and sure to get every opportunity at the top of the order for what has been a thin Scorchers batting lineup. The Hurricanes are very gettable by the better batsmen so Bancroft can make a statement here.

Jason Behrendorff ($18,000) looks right back to his best and has taken two wicket in all three games so far, claiming an economy bonus each time. He picked up the left-handers Weatherald and Ingram last time so the left-handed opening combination of the Hurricanes holds no fears. He is priced up but has the form to match.

Jofra Archer ($15,300) had one of his worst performances with the ball on Friday night, going for 47 runs against the Thunder. He will no doubt be keen to bounce back and finds friendlier bowling conditions this time against a brittle batting lineup. He is a genuine wicket taker with substantial upside at this salary, as proven by his 103 points against the Stars in game 2.

Do you take the risk with Ashton Agar ($12,200) this time around? He sunk many teams against the Strikers as he didn’t get a look in with bat or ball on a pitch that suited the Scorchers pace attack. His price has plummeted as a result and the fact the Scorchers generally play six genuine bowlers is really affecting his reliability for DFS. His upside is considerable given his ability to score in all categories with bat and ball but with concern over both his form and his role, you really need to think hard about the construction of the lineups you choose to use him in.