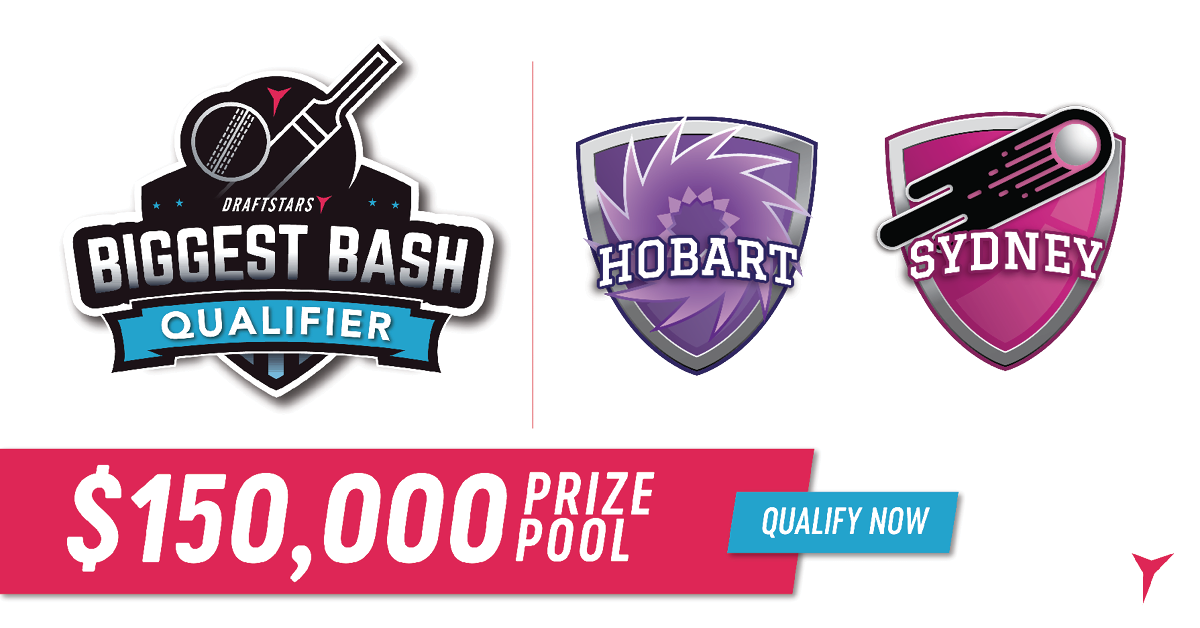 The Hobart Hurricanes continue their run of early season home games in BBL08 on Friday night when they host the Sydney Sixers at Blundstone Arena. The Hurricanes are dominating the competition at the moment sitting atop the ladder at 4-0 and can go two wins clear on top if they win here. The Sixers have worked their way to 3-2 after away wins over the Heat and the Renegades.

For just a $2 buyin on every home and away game of BBL08 you can win entry to the first ever live final in Australian DFS history with the Draftstars “Biggest Bash” contest. If you outscore the opposition you win the chance to compete for a share of $150,000 as well as flights and accommodation to Crown Melbourne for a VIP event on February 17. Check out our interview with Jason Knox aka “Knoxinator”, who was the first player to qualify this season with just a solitary $2 entry!

New to Big Bash DFS? Picking the right games to play is a vital skill in winning yourself some cash. There are a number of sites offering a wide range of contests so we have an article breaking down all the contests on offer.

Not familiar with some of the players? Check out our profiles on the Hobart Hurricanes or Sydney Sixers to get all the info you need before building your lineups.

Blundstone Arena provides some interesting stats in past seasons, with the highest boundary percentage across all venues but only average scoring numbers overall. Teams batting second have produced considerably higher batting figures, with an average scoring rate in excess of 0.7 runs per over higher. Whatever the reason for this, it may be worth keeping in mind when building lineups. The Hurricanes have successfully chased in both games here this season, with their latest win over the Thunder one of the matches of the tournament when they ran down the Thunder’s 193 with 5 balls to spare.

D’arcy Short ($26,400) keeps going up in price but with his recent form with the ball he is still more than playable if you can fit him in your lineup. Twice he has taken 2 wickets with an economy rate of less than 6 in his past three games, which has contributed to his season average of 93.3 with a lowest score of an incredible 85. Fading at this price can’t be a bad thing as his upside is somewhat limited, but he clearly has a 100+ score in him which would be plenty to justify paying up for him.

Moises Henriques ($11,600) put himself up to no. 3 last game against the Heat and finally delivered with the bat, scoring a blistering 57 off only 37 deliveries. The Hurricanes are gettable on this batsman-friendly pitch and Mo is still under-priced after his poor start to the season. He is sure to be popular after his last innings but at this price you need to have some exposure to the Sixers’ skipper – especially considering you can play him as a bowler if you want a batsmen-heavy lineup.

Justin Avendano ($9,400) announced himself in BBL competition on debut against the Heat where he opened the batting and hit 30 off 24 balls, before being run out in bizarre circumstances. His price has risen but he is still right down for an opening batsman and he showed enough on debut to suggest he can return value at this salary. If you want to pay up for Short you will need to save money somewhere and Avendano provides an obvious opportunity to do so.

Jofra Archer ($15,100) has been a bit off the boil at his past couple of matches, scoring just 30 and 23 with only the one wicket. He flashed his considerable upside at this ground against the Stars, taking 3/25 to top the 100 point mark, and may be available at slightly lower ownership than usual given his recent performances. Combine upside with soft ownership and you get a shot at a situation which can put you in the mix to win a big contest if you catch him at his best.

Steve O’Keefe ($18,400) holds the highest projection of the match and his consistency is key to this, with a score of 40 in his last outing his lowest effort in five games this season. He has taken a wicket in all five matches so far and his last game against the heat was the first time he hasn’t earned an economy bonus. If there is a weakness to the Hurricanes top order it is against spin and he could be the man to include if you want to go against the high priced Short.

Clive Rose ($10,300) did a magnificent job here against the Thunder when he took 2/30 in a high scoring match and was very tidy once again against the Scorchers. He may have limited upside but at this price he is capable of returning value and allows you to save salary against the more expensive bowlers if you don’t think they can match their price tag.