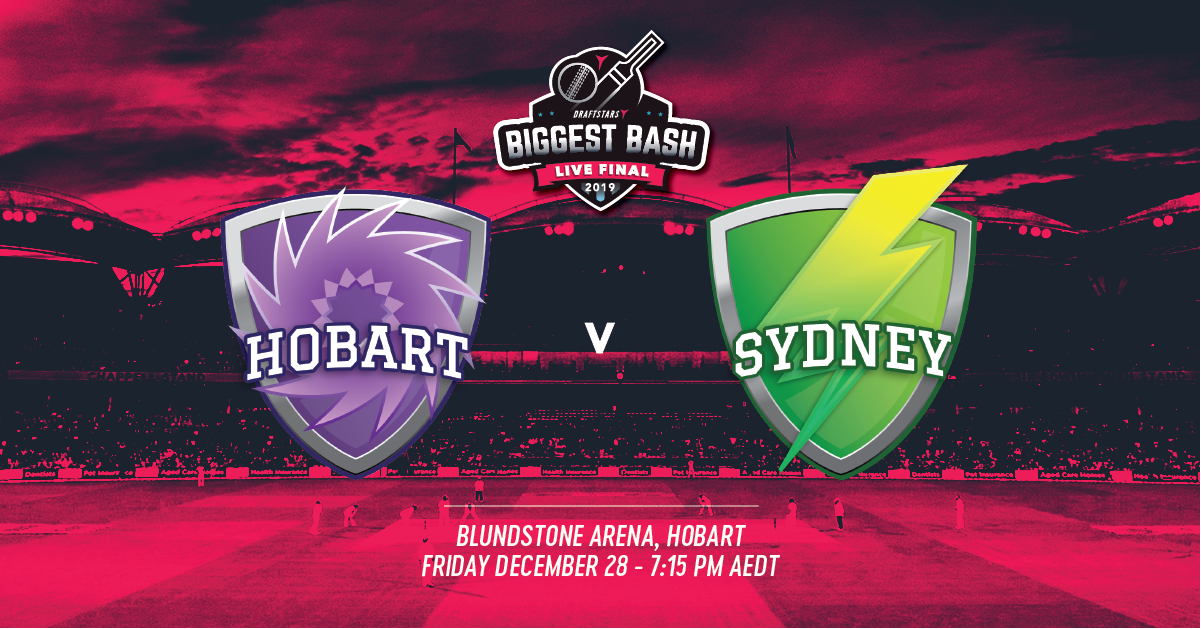 The in-form Hobart Hurricanes back up for another home game at Bellerive this Friday night against the visiting Sydney Thunder. The Hurricanes have won both games to start the BBL08 season but will get stiff competition from the Thunder, who also remain undefeated after wins against the Stars and the Sixers.

Remember, on every game of the home and away season you can win entry to the first live final in Australian DFS history to compete for a $50,000 first prize with the Draftstars’ “Biggest Bash” Contest. Check out our interview with Jason Knox aka “Knoxinator”, who won the first qualifier this season with just a $2 entry in his first try playing for real money!

We also have full profiles of the squads of all eight Big Bash teams, so you can read up on any of the Hobart Hurricanes or Sydney Thunder players you may not be familiar with prior to building your lineups.

Blundstone Arena provides some interesting stats in past games, with the highest boundary percentage across all venues but only average scoring numbers overall. Teams batting second have produced considerably higher batting figures, with an average scoring rate in excess of 0.7 runs per over higher. Whatever the reason for this, it may be worth keeping in mind when building lineups. The first game at Blundstone this season saw the chasing Hurricanes get the prize so this ground theory remains in play.

He is the most expensive player in the competition but D’arcy Short ($25,000) continues to measure up at the top of the order. After a bizarre dismissal restricted him to 34 off 22 balls against the Stars he made up for it with the ball, taking 2/23 off his four overs to finish with a score of 108.5. He is clearly the greatest source of raw points in this match and with only 6 players priced above the average he is easy to fit in your lineups. Will be popular for good reason once again.

We identified Matty Wade ($14,100) as being too cheap against the Stars given his position opening the batting and he showed what he was capable of with 52 off 37 balls. While his price has increased it is still very reasonable in the context of the match and there is no reason he can’t play a similar innings on his home deck. He rates highly again.

The Thunder opening pair of Shane Watson ($15,900) and Jos Buttler ($17,500) is where their class lies. Watson is yet to get going this season but you get a very attractive salary as a result, whereas Buttler took the Sixers apart with 63 off 37 in his most recent hit. These remain the obvious match winners for the Thunder and should be played accordingly in your lineups.

Fawad Ahmed ($14,200) might not get the attention he deserves but he is a very reliable T20 bowler and again tops our projections for the Thunder. The rainy conditions meant he didn’t bowl in game 1 but he impressed with 3/33 against the Sixers. The Bellerive pitch won’t be as suitable but he is a wicket taker as well as being able to restrict the scoring so he gives you two opportunities for points with the ball.

James Faulkner ($13,000) has dropped away over the past couple of seasons but he gets great opportunity back with the Hurricanes, bowling the early and late overs as well as fielding on the fence and getting a look in with the bat in the middle order. At a below average price he doesn’t have to do a lot to justify his place in your lineup and his value figure reflects this.

Not many cricket followers would have known the name Jono Cook ($9,500) until his debut against the Sixers but he impressed with the ball taking 1/17 off his four overs and he even chipped in for 12 with the bat. That big score of 90 sitting in his average might lead to a far higher ownership than he probably deserves but even half that score would be more than acceptable at his price point.