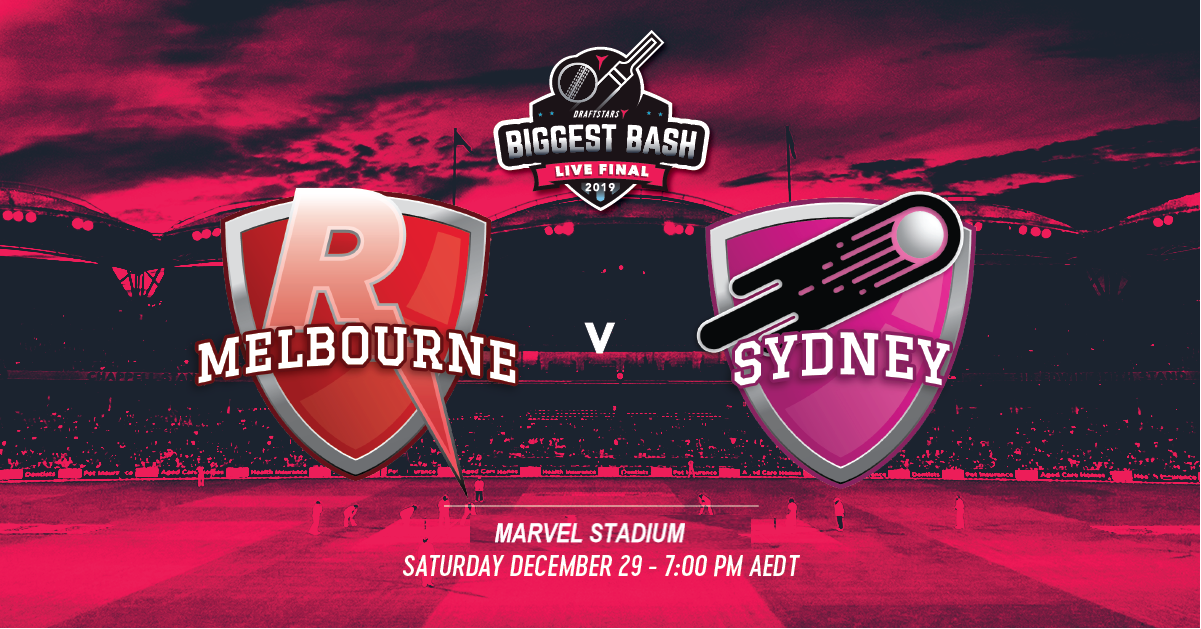 BBL08 returns to Marvel Stadium where the unbeaten Melbourne Renegades will host the out of touch Sydney Sixers. The Renegades scored a stunning away win over the Adelaide Strikers to back up their defeat of the Perth Scorchers, while the Sixers have lost their past couple, the most recent against the Stars on Thursday.

Remember, on every game of the home and away season you can win entry to the first live final in Australian DFS history to compete for a $50,000 first prize with the Draftstars’ “Biggest Bash” Contest. Check out our interview with Jason Knox aka “Knoxinator”, who won the first qualifier this season with just a $2 entry in his first try playing for real money!

We also have full profiles of the squads of all eight Big Bash teams, so you can read up on any of the Melbourne Renegades and Sydney Sixers players you may not be familiar with prior to building your lineups.

Marvel Stadium (Docklands) ranks around average for runs per wicket and runs per over among all of the BBL grounds and has a reputation of favouring those who can take pace off the ball. Interestingly teams batting first have a considerably better record when it comes to runs and strike rate so conditions tends to be better earlier in the game which may be worth keeping in mind when building your lineups. In the first game this season we saw an extremely low scoring contest, where the Renegades were able to successfully chase the Scorchers total of 103 with just 4 wickets in hand.

Do we now start to consider Mohammed Nabi ($20,800) as a batting all-rounder? He has scores of 35 and 48 at big strike rates to start the season, which is wall papering over the cracks of his plain returns with the ball. That said, he did take a wicket and claim a minor economy bonus last game among his overall score of 112. Expensive but is a scoring threat in all categories which gives him a tremendous ceiling.

Daniel Hughes ($11,000) has plummeted in price despite a three game average of 46.5. Has looked in reasonable touch in his past couple despite failing to kick on but showed in game 1 he is capable of a massive score for this salary, scoring 101.5 against the Scorchers. Bats up the order and has topped a 140 strike rate in 2 of his 3 innings so he is clearly under-priced.

Sixers captain Moises Henriques ($8,000) has been in very plain form with the willow, averaging less than 9 in his three hits so far this season. As a result he has plummeted to a minimum price, which is extremely cheap given his record of good performances. He is too good a player to continue to miss out with the bat and gives you a ton of lineup flexibility so he is deserving of a place in your lineups.

Steve O’Keefe ($19,400) has been dominating at the SCG with scores of 115 and 88 in his two matches there. Playing away is a concern at his price tag but he scored 54 at Spotless Stadium and this has also had its moments as a bowler-friendly pitch. Garners plenty of respect from his opposition at the moment which helps his economy rate and he has taken multiple wickets in every game so he holds obvious appeal.

Usman Shinwari Khan ($14,260) dominated in his appearance at this ground, taking 2/17 off four overs, before the Strikers got a hold of him last game. His salary has increased dramatically to a level which should see him one of the lower owned bowlers in the game. If he can repeat his first display at this ground he will make for a nice point of difference.