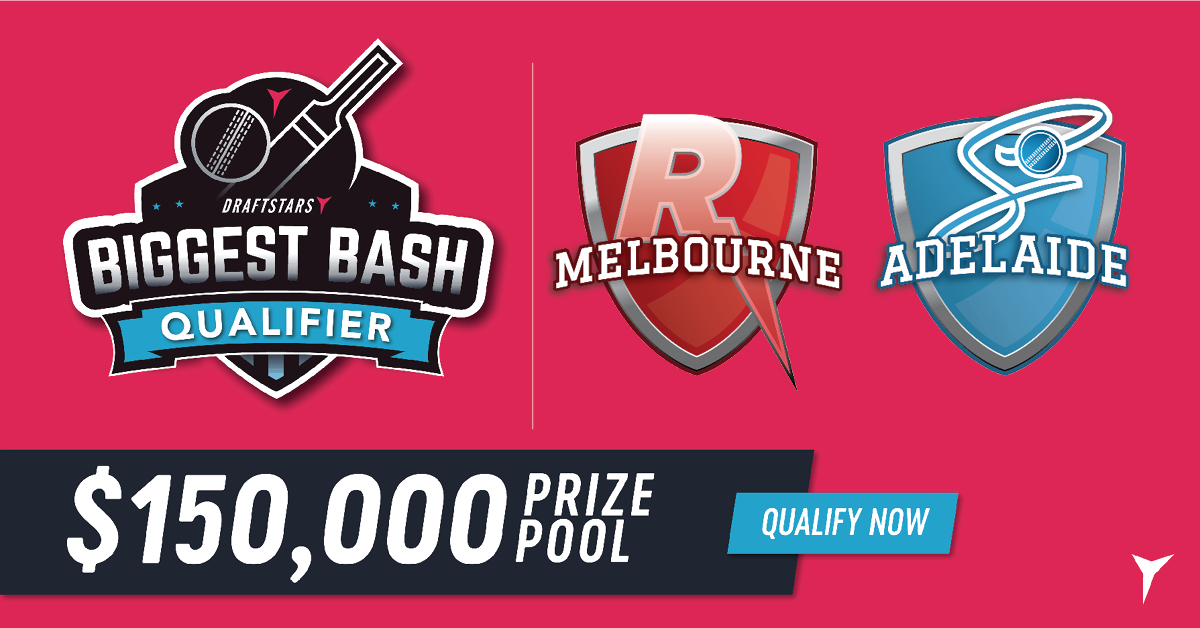 BBL08 heads to Geelong on Thursday night where the Melbourne Renegades will take on the Adelaide Strikers at GMHBA Stadium. The Renegades have lost their past two games after a strong start to the season so will be looking to bounce back against the Strikers, who got their season back on track on New Year’s Eve with a 20 run win over the Sydney Thunder.

The Draftstars’ “Biggest Bash” Contest gives you the chance to compete for a $50,000 first prize in Australia’s first ever live DFS final! You can win flights and accommodation to Crown Melbourne for the VIP event at Club 23 by winning a qualifier for just a $2 entry, offered on every game of the home and away BBL season. Check out our interview with Jason Knox aka “Knoxinator”, who won the first qualifier this season with just a $2 entry in his first try playing for real money!

Not familiar with some of these newer names? Check out our profiles on the Melbourne Renegades or Adelaide Strikers to get all the info you need before building your lineups.

GMHBA Stadium in Geelong is better known as an AFL venue, home of the Geelong Cats. There was one match played here last season which was exceptionally low scoring, where the Renegades chased down 111 two down to defeat the Sixers. This may have been just a poor batting display by the Sixers but keep this in mind when you build your lineups, as targeting the bowlers and cheap hitters may be your key to DFS glory at this ground.

The opening pair of Sam Harper ($12,500) and Mackenzie Harvey ($11,300) have been a shining light in what has been a bleak batting display so far by the Renegades. Opening the batting against the Stars they were both very busy at the crease and will only improve with experience. Unfortunately they have risen in price and now come up against one of the best bowling attacks in the business. Harper has more upside given his greater experience and role with the gloves but both are still playable.

What do we make of Cam White ($10,600)? His price has plummeted after a spate of poor innings this season but interestingly his only handy knock was his 32 off 22 balls when the Renegades defeated the Strikers in Adelaide. In a match without many standout options with the bat, maybe this is the right price to keep the faith with the Bear as a quick fire 30 is all that is required at this salary and his upside if he gets going is fantastic.

For those looking for a cheaper option, this may be the type of game Jonathan Wells ($9,200) gets some time at the crease. He is always at risk of little involvement in the game given he comes in at no. 5 or 6 but on a low scoring ground against a reasonable bowling attack there is a genuine chance he comes in around the 10 over mark. He cracked 42 off 30 balls against the Renegades earlier this season and is also good in the field so he may be the point of difference required to take down a big contest.

When you want to target a bowler you look straight to Rashid Khan ($21,100). He has been exceptional this season, averaging 88 points across his four games with 7 wickets at a terrific economy rate. Interestingly the Strikers were the first team to get a hold of him last time but expect him to bounce back against an out-of-sorts Renegades batting lineup. He is always popular but for good reason.

Ben Laughlin ($10,800) has surprisingly only taken the 1 wicket so far this season despite being a renowned wicket taker who had averaged 1.24 per game in the past two seasons. With his variety of deliveries he may be hard to play if the pitch is lacking pace and his economy rate has still been very solid, earning a bonus in three of his four games. With a low average of 25.8 this season this may be the game you can get a result from him at low ownership.

The Renegades bowlers are generally priced up here with good records due to a very bowler-friendly home pitch at Marvel Stadium. In their game at the Adelaide Oval their five main bowlers all went at a clip of 7 runs per over or above so they all have some risk knowing the Strikers have got a hold of them in the past. Ex-Striker Kane Richardson ($15,100) is their major wicket taker with 8 wickets this season and has the added incentive of playing against his old side so he may be the pick of them. However, they are a hard group to sort out so if you are playing multiple lineups you may be best served rotating them through.