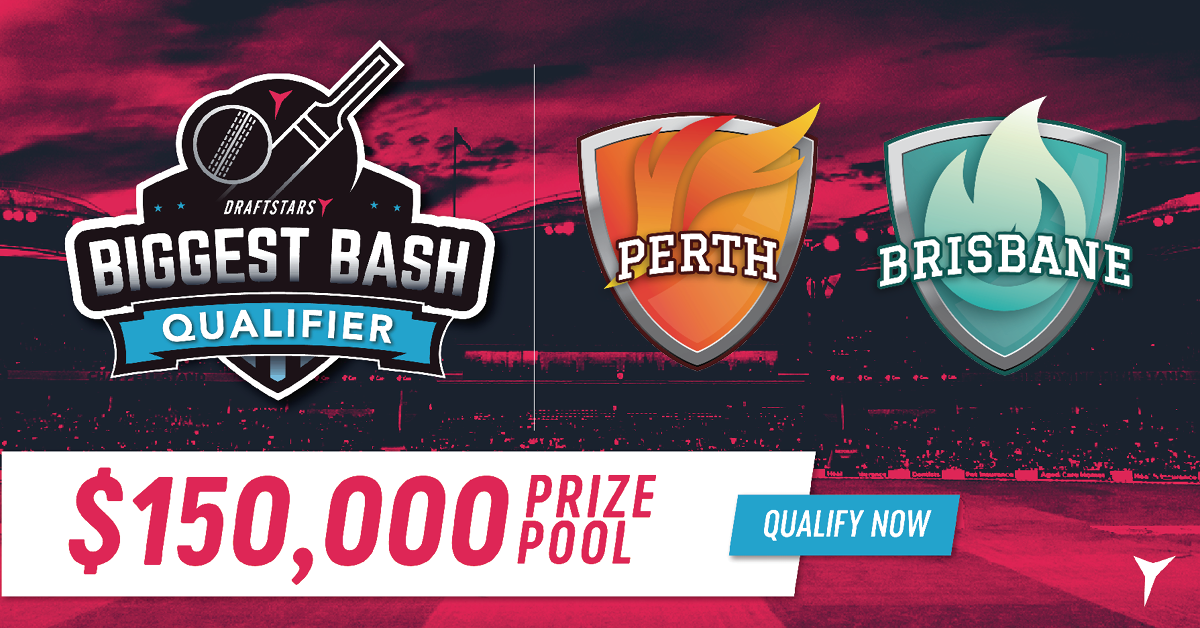 The second leg of Saturday night’s BBL08 double header is at Optus Stadium where the Perth Scorchers will host the struggling Brisbane Heat. The Scorchers lost a heartbreaker to the Sydney Thunder by one run on Wednesday night and are desperate for a win sitting at 1-4. If there is a stronger word for desperate then that is what the Heat are – their loss to the Sixers on New Years’ Day meant they remained winless at 0-3.

For just a $2 buyin on every home and away game of BBL08 you can win entry to the first ever live final in Australian DFS history with the Draftstars “Biggest Bash” contest. Simply take down the qualifying contest on one of the BBL08 matches and you score a trip to Melbourne to compete for a monster $50k first prize! Read our interview with Jason Knox aka “Knoxinator”, who showed just how possible this is by taking down the first qualifier of the season with just one lineup!

New to Big Bash DFS? Picking the right games to play is a vital skill in building your bankroll. There are a number of sites offering a wide range of contests so we have an article breaking down all the contests on offer.

We also have full profiles of the squads of all eight Big Bash teams, so you can read up on any of the Perth Scorchers or Brisbane Heat players you may not be familiar with prior to building your lineups.

While last season’s solitary game at Optus Stadium produced a run feast for the Hobart Hurricanes, the first game there this season was anything but. The Scorchers knocked over the Strikers for just 88 runs on a wicket with a particularly green tinge and then passed their total three wickets down with two overs to spare. Such a pitch suits the pace battery of the Scorchers so don’t be surprised to see a similar wicket on offer again, although maybe not quite as brazenly green as was served up last time.

When you’re considering batsmen for your lineup, then it’s hard to look past Chris Lynn ($23,300). Arguably the most dangerous batsman in the competition, Lynn was back to his brutal best last match against the Sixers with 84 from just 55 balls including five massive sixes for a whopping 125 fantasy points. If Lynn gets going then his strike rate is always going to be high which means big fantasy points. The only problem is that he is one dimensional – you won’t get fielding or bowling points from Lynn.  At the super premium price tag, it’s either hit or miss – if he goes off then you’re flying but if he fails, your team is toast.

A new recruit for the “Bash Brothers” this year is youngster Max Bryant ($14,100). Capable of clearing the fences, Bryant has been given responsibility for opening the innings and is starting to showcase his potential with 65 fantasy points in his last match. Bryant is always up for strike rate bonuses, and all you need is for him to turn his starts into a big score.

The Scorchers batting has let them down this season but Ashton Turner ($14,500) lit it up last match against the Thunder with a cracking 60* from just 36 balls for 102 fantasy points. Turner is a super-talented player who seems to thrive in the Big Bash format. He has struggled in recent times for WA so perhaps this latest innings is his turning point for his form. He’s usually not heavily owned and if he’s batting in the top four then he’s an attractive prospect once again.

The most expensive bowler in this match is Scorcher Jhye Richardson ($19,000). He has found himself as the fifth or even sixth bowler in the stacked Scorchers bowling lineup, but his raw pace has proven difficult for batsmen to overcome with some consistent scoring and an average of 80.4 fantasy points this season. Richardson has also bowled some late overs which can often produce some cheap wickets.

It’s hard to look past James Pattinson ($13,300) at an affordable price. The big quick is still working his way back to full health, but at his best he is a fearsome opening bowler and he might be able to do some damage against the brittle Scorchers top order. Pattinson is also very handy in the lower order, so if given the opportunity, he can sneak some extra batting points.

Another spinning revelation this season is Mujeeb Ur Rahman ($13,200). Again we’re getting a pretty good price on him and although he missed out last match, he took 2/23 against the powerful Hurricanes batting and is capable of causing some havoc. The question is whether conditions will be favourable for pace or spin on the Optus Stadium surface. He might be worth taking the chance at the price.