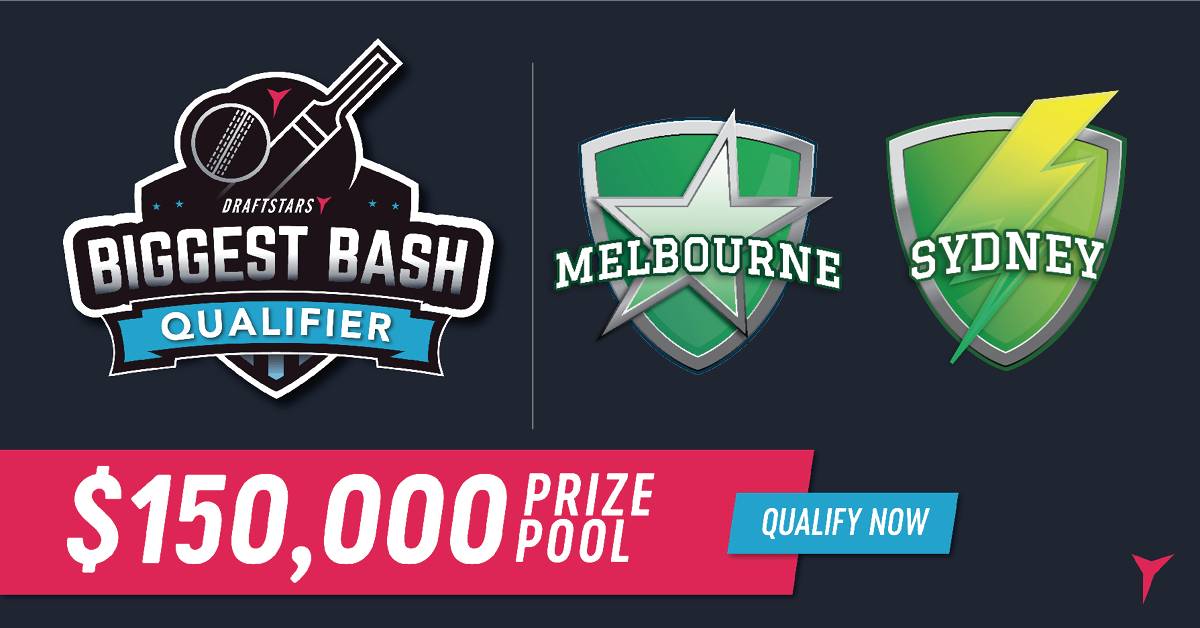 The Melbourne Stars host the Sydney Thunder in a game at Metricon Stadium on the Gold Coast on Saturday night in the first of a BBL08 double header. The Stars are starting to roll with a couple of big wins over the Renegades and the Sixers at their past couple of matches. The Thunder won an absolute thriller on their home deck against the Scorchers on Wednesday night to get to 3-2 and can move to 2nd on the ladder with a win here.

For just a $2 buyin on every home and away game of BBL08 you can win entry to the first ever live final in Australian DFS history with the Draftstars “Biggest Bash” contest. If you outscore the opposition you win the chance to compete for a share of $150,000 as well as flights and accommodation to Crown Melbourne for a VIP event on February 17. Check out our interview with Jason Knox aka “Knoxinator”, who was the first player to qualify this season with just a solitary $2 entry!

New to Big Bash DFS? Picking the right games to play is a vital skill in winning yourself some cash. There are a number of sites offering a wide range of contests so we have an article breaking down all the contests on offer.

We also have full profiles of the squads of all eight Big Bash teams, so you can read up on any of the Melbourne Stars or Sydney Thunder players you may not be familiar with prior to building your lineups.

Metricon Stadium on the Gold Coast is better known as an Australian Rules Football ground and the host venue of the Commonwealth Games. There have been two games played here so far this season. The Hurricanes put up 159 in 19 overs at this ground back in game 5, which was 15 runs too many for the Heat to chase down. In the latest game, the Sixers successfully chased down the Heat’s 164 with 3 balls to spare. These results sit around average in comparison to other grounds this season so there aren’t many trends to benefit from here.

Marcus Stoinis ($19,000) returned to form in the local derby against the Renegades with a monster fantasy game. Stoinis smashed 78 runs, took two catches and picked up two wickets for a huge score of 174.50 fantasy points. He’s a ready-made match-winner, so it’s great to see him back opening the batting where he can really influence a game. He’s also clearly over his ankle injury and will be bowling more overs moving forwards, especially with Jackson Coleman out of the side. When Stoinis was batting down the order and not bowling, he was a fantasy fade, but now that he’s fighting fit, you need to have him in your lineups.

It’s going to be hard to fit all of the guns in your salary cap, but it’s impossible to ignore the form of the Thunder’s Jos Buttler ($19,500). With three half-centuries and 250 runs already this season, Buttler is leading the competition run scorers, and giving the Thunder plenty of help before he leaves to join the England national squad.  Buttler’s strike rate is always high, and he can take a couple of catches with the gloves which is a bonus for fantasy coaches.

In the crash and bash of T20 cricket, an accumulator like Callum Ferguson ($13,200) is often overlooked by fantasy coaches, but if you’re looking for an affordable batsman and a point of difference, then he’s worth consideration. Ferguson is always right in the action batting at number three, and his recent form is pretty good. He’s got starts in every match so far, with two 40+ scores in his last two. His 42 off 30 balls against the highly-fancied Scorchers bowling attack was enough for man-of-the-match honours and 54.50 fantasy points.  He’s a class batsman, offering good value for his price and a decent ceiling if he can crack a 50.

If it’s a spinner’s deck then look no further than Fawad Ahmed ($13,000). The leggie has bowled beautifully when conditions have suited, and he even popped up with a remarkable run out last match for an unexpected fantasy points boost. You know you’re going to get four tight overs, and likely a wicket or two, but keep in mind his form away from Spotless Stadium doesn’t regularly meet the lofty heights he sets at home.

Liam Plunkett ($13,500) is an interesting player here as the overseas replacement for Nepalese spin sensation Sandeep Lamichhane. He is an extremely experienced T20 bowler who bowls with good pace and has 23 T20 wickets for England in only 20 matches. Whether he takes some time to settle in to the Australian conditions remains to be seen but as a new name in BBL08, this might be your chance to roll the dice with him at lower ownership.

One of the revelations of the Big Bash League so far has been Daniel Sams ($18,400). Some are suggesting the bubble might burst soon, and now that he’s at a premium price, many might look to fade him from their lineups. However the fact is that he’s getting a hit in the top six, he’s always going to bat with a high strike rate, and he’s getting plenty of bowling opportunity, including the death overs which are great for cheap wickets. All of those factors add up to a great fantasy player.