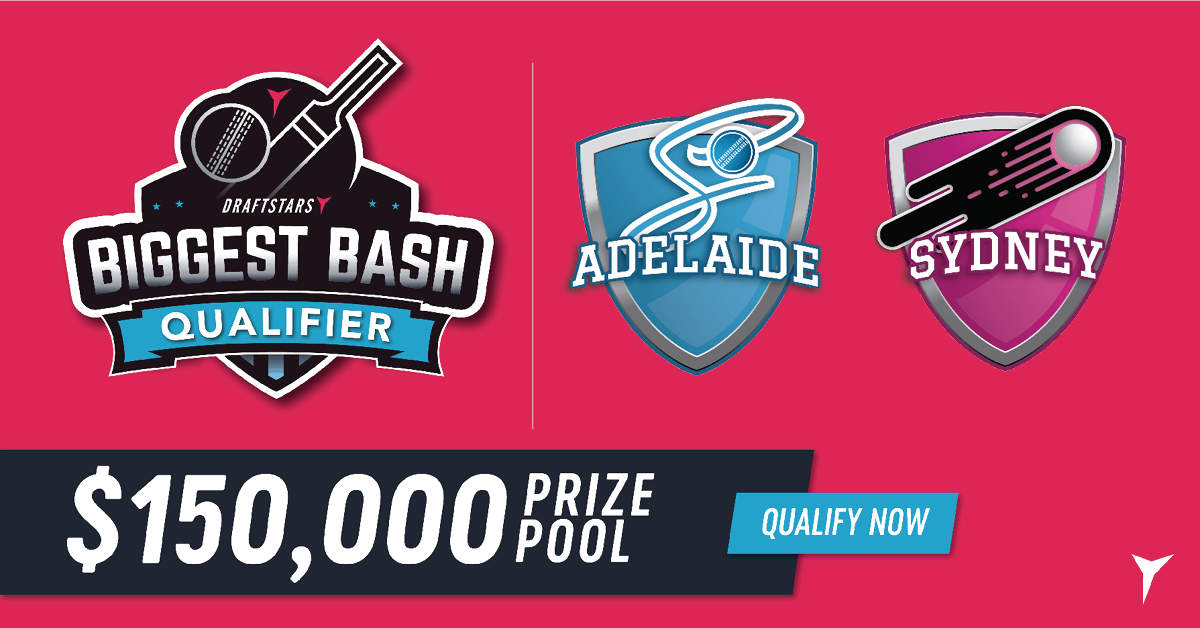 BBL08 returns to the Adelaide Oval on Sunday night with the Adelaide Strikers welcoming the Sydney Sixers to town. The Strikers return home after a dominant win over the Renegades in Geelong on Thursday night, while the Sixers failed to hold off the rampaging Hurricanes in Hobart, losing by 5 wickets.

For just a $2 buyin on every home and away game of BBL08 you can win entry to the first ever live final in Australian DFS history with the Draftstars “Biggest Bash” contest. If you win one of the qualifiers run on every home and away game you score a trip to Melbourne to compete for a monster $50k first prize! Read our interview with Jason Knox aka “Knoxinator”, who proved you can win with just one $2 entry!

We also have full profiles of the squads of all eight Big Bash teams, so you can read up on any of the Adelaide Strikers or Sydney Sixers players you may not be familiar with prior to building your lineups.

The Adelaide Oval has been an interesting venue for BBL play, with the second highest average first innings score of all the major grounds but overall statistics which are more mid-range. This suggests batting first may be an advantage and you may lean to those getting first use of the deck when building your lineups. In the first match so far this season, the Melbourne Renegades were able to chase down 174 thanks to a big lower-order partnership from Christian and Nabi which looked incredibly unlikely at 5/82. On New Year’s Eve, the Strikers set a target of 175, which could easily have been more but for a faltering finish, and it was 20 runs too much for the Thunder.

Alex Carey ($18,000) is generally the most reliable of the Strikers batsmen and he has fallen in price after scoring just 16 runs against the Renegades. His previous knock here against the Thunder was an excellent 59 off 40 balls and he obviously gets a small fielding boost considering he takes the gloves. He has as much upside as any of the batsmen in this match and his consistency is worth paying up for.

Jake Weatherald ($15,300) finally exploded last game against the Renegades, smashing 71 off 44 balls and racking up a massive 122.5 fantasy points. As a result his salary has increased substantially and looks high against his previous scores, but it is worth noting he has made double figure in every innings so far so the big score was due. When he hit form at the end of last season he held it, making three consecutive fifties including a century, so while his price and ownership is now up it might be worth trying to ride the wave.

Dan Hughes ($12,600) is one of the mainstays of the Sixers top order and was back in form against the Hurricanes with 61 off 40 balls. That was his second knock above 60 this season and such an innings brings excellent upside at this salary. He has only taken one catch in six games so if he fails with the bat he will probably kill your lineup but he will appreciate a good batting deck and is worth exposure in your lineups.

Rashid Khan ($22,300) has a sky high projection and continues to meet it, averaging 93 this season and has gone 88+ in 4 of his 5 games. He has taken 8 wickets and has scored the full economy bonus in 4 of his 5 games. On a true Adelaide pitch he probably won’t get his chance with the bat which has provided bonus points in his past two away games, but as a source of raw points he is clearly the top pick once again.

Tom Curran ($20,700) is priced right up now but is hard to argue against it considering he has gone above 100 fantasy points in his past three matches. The key to his run has been multiple wickets at a low economy, plus opportunity with the bat down the order. There is no reason he can’t do the same again here but keep in mind he has scores of 2 and -1 so he is capable of decimating your lineup, especially if the Sixers top order happens to fire for once.

Peter Siddle ($14,800) returns from Test duties to his home deck where took an excellent 3/20 against the Thunder. He isn’t really thought of as a short-form bowler so his ownership is generally on the low side but his performances over the past season and a bit have been sensational. He has the upside at this salary as proven by his last outing and he consistently hits his economy bonus so he has strong appeal again.