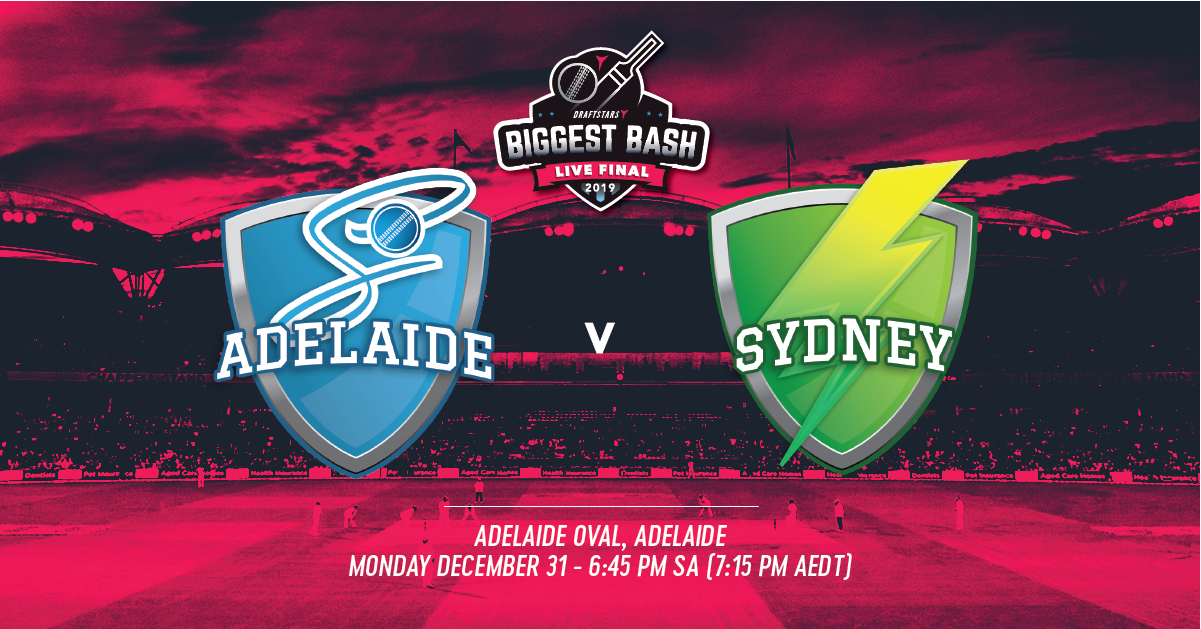 Adelaide Oval hosts the next game of the BBL08 season on New Year’s Eve when Sydney Thunder rolls into town to take on the Adelaide Strikers. After beating the Heat convincingly to start their season, the Strikers have lost their past two to the Renegades and the Scorchers. The Thunder also got off to a good start, winning their first two games, before the Hurricanes chased down their 193 on Friday night in Hobart.

Not familiar with some of these newer names? Check out our profiles on the Adelaide Strikers or Sydney Thunder to get all the info you need before building your lineups.

The Adelaide Oval has been an interesting venue for BBL play, with the second highest average first innings score of all the major grounds but overall statistics which are more mid-range. This suggests batting first may be an advantage and you may lean to those getting first use of the deck when building your lineups. In the only match so far this season, the Melbourne Renegades were able to chase down 174 thanks to a big lower-order partnership from Christian and Nabi which looked incredibly unlikely at 5/82.

Jos Buttler ($17,100) is in scintillating form, following his 110.5 against the Sixers with a massive 151.5 against the Hurricanes. His 54 ball 89 was one of the innings of the tournament so far and highlights the massive upside which still remains at this price. If you were to make a case for fading Buttler you could argue the Strikers bowling lineup is much stronger than the Hurricanes and he may be very highly owned but he is clearly the pick of the Thunder batsmen at the moment.

Finding a reliable batsmen in the Strikers lineup is quite difficult at the moment. Alex Carey ($21,100) seems overpriced given he has one good score in three innings (an excellent 46 ball 70 against the Heat) but he does love batting at his home ground and was run out against the Renegades before struggling on a tough deck in Perth. He is their leading batsman at the top of the order and with many value options available in this match, you should be able to afford him for your lineups.

How many chances can we keep giving Shane Watson ($10,500)? He has made three starts, scoring over 20 with the bat each time, but has failed to go on to score the runs needed at his price tag. His salary is considerably lower this match which makes him very easy to fit into your lineup and you get the feeling it is just a matter of time before he goes on and makes a big score. If he does at this price point, you are going to be hard pressed to win without him.

Rashid Khan ($22,300) goes up in price again but he continues to outperform his salary. His lowest score in three games this season is an incredible 88 and he even showed some ability with the bat against the Scorchers with a quick 21 late in the innings. With Perth chasing a low score they were happy to see out his spell for just 9 runs, but that also restricted his wicket-taking prowess. Teams won’t usually have that luxury and at a massive 92.75 projection he is a superb source of raw points game after game.

Chris Green ($12,300) hasn’t set the world on fire so far this season but with an average of 35 he hasn’t been poor by any means. His 26 off 14 balls against the Hurricanes showed his value with the bat and against a strong Strikers bowling attack he may get another chance to boost his score with the bat. He is generally quite tidy with the ball, earning economy bonus points twice this season, and has taken a wicket in two games. The fact he can score in all batting and bowling categories means he usually avoids a lineup killing score and he certainly has upside at this salary.

Arjun Nair ($8,000) has been dropped to the minimum price after failing to take the field for the Thunder so far this season due to a combination of injury and team success. With the team registering their first loss he may get his chance to play this time around and his high projection shows the value he brought to the side last season. A genuine all-rounder, his salary is clearly too cheap if he is picked to play.