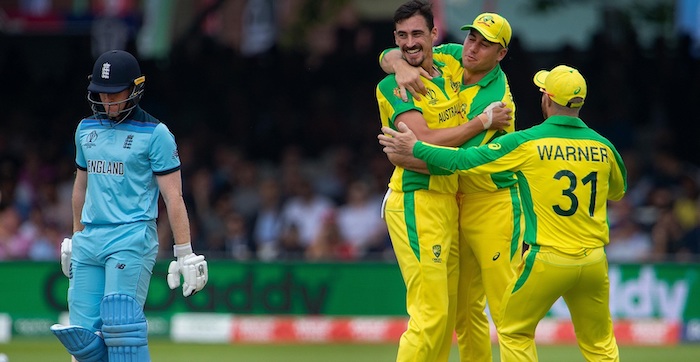 Australia will face off against England in the second semi final of the 2019 Cricket World Cup this Thursday night!

Australia finished second on the round robin table behind only India while England finished in third place, setting up what should be an historic semi final between the two old rivals.

Both of the major Australian daily fantasy sports players have gone all-out for the semi final. Moneyball are offering a massive $20,000 guaranteed tournament for just $15 entry as well as the $2 rib tickler which has a prize pool of $1,000.  Draftstars will also be offering a feature tournament worth $20,000 and a smaller tournament of $1,000 with just a $2 entry fee.

As usual, we have a full fantasy breakdown for the monster semi final between Australia and England below!

How can you go past the big left-arm paceman on Thursday night? Starc has been the best bowler at the Cricket World Cup by a fair stretch, taking 26 wickets through nine games at a ridiculous average of just 16.61. The lefty was also dominant when the two sides met a few weeks ago at Lord’s, taking 4/43 off just 8.4 overs.

Starc terrorised the English batsmen in their last ODI series against each other, and has taken 11 wickets in their last five meetings including the scalps of all of the top six in Johnny Bairstow, Jason Roy, Joe Root, Eoin Morgan, Jos Buttler and Ben Stokes at least once.

Call me crazy but I think the Australian pace attack is capable of making early inroads into this dominant English batting line-up. We saw the English top order completely collapse the last time they played, falling to just 4/53 before a fight back was made by Stokes and Buttler.

Buttler has been in okay form this series he just hasn’t really been required by his team to bat for long periods of time, apart from when it took him just 76 balls to blast 103 in their second game. If Starc and co. can claim early wickets, Buttler will be called upon to play a bigger role on Thursday night.

It’s not a stretch to say that the English super-star has some serious mental issues when it comes to facing the Australian pace attack. He was caught absolutely plum in front from a big Starc in-swinging Yorker in their meeting a few weeks ago and had a horror run in the five match ODI series against Australia in England last June.

Root batted five times for just 106 runs in that series and in 24 ODI matches against Australia his outstanding career batting average of 51.32 drops by almost half to just 26.90. He has never scored a hundred in those 24 games.