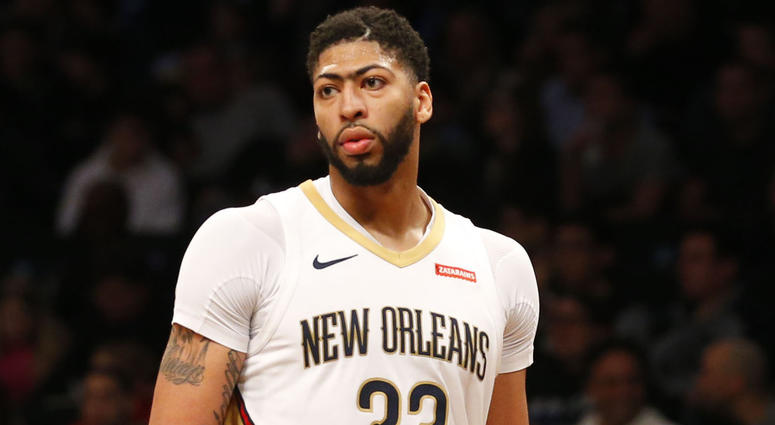 NBA Thursday is back with a MASSIVE 11 game slate to sink our teeth into. The usual major Thursday DFS tournaments are on offer:

We have broken down the matchups and highlighted the key plays to help you build winning lineups.

Don't forget that this week we have launched our new NBA Resources section which features a range of great tools from the guys from Fantasy Boss - you can review the days play, review matchups, analyse minutes and usage stats and get projections for every day's play. Do your NBA DFS game a favour and check it out daily to help you build the best possible lineups!

For more insight into how to utilise our game breakdown data check out our NBA DFS Training Camp series that comes out weekly:

Game breakdown on an 11 game slate is key as there are quite simply an unlimited number of options and unless you are scripting 150 max entry line-ups you can’t play everyone! Just two games are yet to have a total with the New Orleans vs Minnesota Timberwolves the most intriguing as it will most likely have the highest total on the board. The other popular game target will be the Portland vs Los Angeles Lakers matchup with a game total of 227 points.

Consistent with the totals Portland and Minnesota are the two biggest pace up plays on the slate and will be popular targets for game stacks. Meanwhile two of the more sneaky plays will be the Memphis Grizzlies and Orlando Magic who are both in significant pace up matchups but will could be overlooked due to their slow pace reputation (especially in the Grizzlies case).

Derrick White (DS $7,320, DK $4,700) has assumed control of the point duties for the Spurs over the past two games and posted over 20 fantasy points on both occasions. He has a great matchup on this slate vs the Phoenix Suns who despite not playing at the pace they were last year have been conceding the 4th most fantasy points to point guards over the last 10 games:

Markieff Morris (DS $8,201, DK $4,600) is too cheap after a string of poor performances. He bounced back last game with a 29.5 fantasy point performance and he is averaging 26 minutes and a 17% usage rate this season which should give him ample opportunity to return value on this slate. He has shown GPP winning upside this year with a season high 47 fantasy points and has a great matchup vs Cleveland who have the 4th worst defensive efficiency in the league this season.

Mike Muscala (DS $6,530, DK $3,500) is almost a lock and load on this slate. As I broke down in my Jimmy Butler trade analysis article the Sixers have over 60 minutes to replace and two starting positions. Jimmy Butler has always been a huge minutes per game player, but he can’t cover for two starters himself. With Wilson Chandler on minutes restrictions and the Sixers needing a power forward who can stretch the floor Muscala should get a heavy dose of minutes going forward and until his price catches up he is an elite play. In his last game he played 27 minutes off the bench and scored 26 fantasy points despite going 3/11 from the field.

Donovan Mitchell (DS $12,910, DK $7,400) hasn’t quite made a jump from last year’s performances as yet. However, before last game where he posted measly 20% against the slow paced defensively orientated Memphis Grizzlies he had been ticking along for a stretch averaging 38 fantasy points a game.  At this price he has great upside of over 50 points, and is playing against the Dallas Mavericks who are 22nd in defensive efficiency this year. This should be a nice spot to catch low ownership on Mitchell.

CJ McCollum (DS $12,090, DK $6,600) has a dream matchup vs the Los Angeles Lakers who have conceded the 3rd most real points to shooting guards this season and are playing at the third fastest pace in the league. At this price he makes a great GPP play with over 50 fantasy point upside. HOWEVER, what makes this more interesting is Damian Lillard is a game time decision. If Lillard was to miss this game, McCollum becomes a lock and load play in all formats. This season he has seen a ridiculous 14.2% usage increase when Dame is off the court. There is some small sample size in that but last season he was still getting over a 5% bump which would make him one of the best plays on the slate. Keep an eye on the news.

Aaron Gordon (DS $12,950, DK $7,700) has turned around his slow start to the season averaging over 40 fantasy points in his last five games. This matchup should suit being a pace up game vs Philadelphia who have been playing at the 6th fastest pace in the league this season. The Sixers have also been leaky to power forwards conceding the 6th most fantasy points to the position this season: 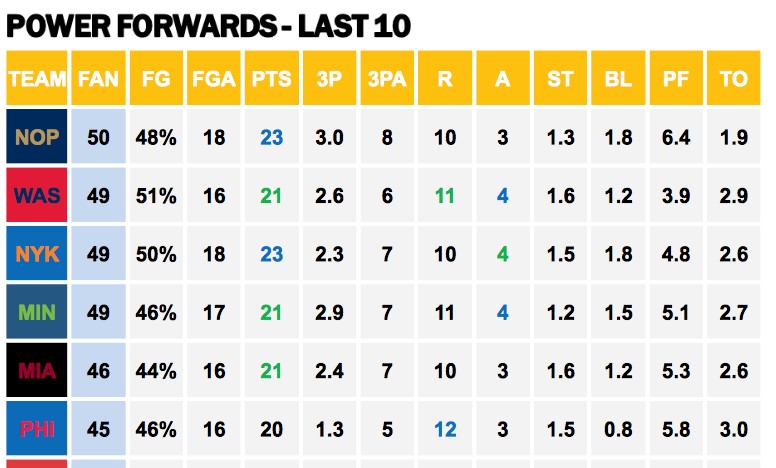 Jayson Tatum (DS $11,920, DK $6,600) hasn’t picked up where he left off in the Eastern Conference finals last season. He has struggled compared to expectations like the rest of the Boston Celtics. However, the last two games things have started to pick up notching back to back 40+ fantasy point performances. His price has remained low despite finding form and he is matched up against the Chicago Bulls who rank 25th in defensive efficiency this season.

Larry Nance Jnr (DS $10,760, DK $5,500) has finally been given opportunity to play consistent minutes as a starter these last two games with injuries to Love, Osman and Dekker. He has always been a big fantasy point per minute player and this season has been no different averaging 1.03 points per minute. He has always exhibited major upside for this price point with a season high of 39.5 fantasy points in just 23 minutes. His matchup vs the Wizards is one of the best in the league with them playing the 7th fastest pace in the league while being ranked 29th in defensive efficiency this season.

Rondae Hollis-Jefferson (DS $9,830, DK $5,200) was unleashed at centre last game with Jarrett Allen missing the game. His price has immediately jumped in response to his 36.5 fantasy points. If Allen is still out he is still an elite play at this price. He may also benefit with more playing time with Caris LeVert being out injured.

Anthony Davis (DS $20,520, DK $11,300) appears to have fully recovered from his injury niggle averaging over 64 fantasy points in his last three games. On this slate he is in a rare pace up match up vs the Minnesota Timberwolves who currently hold the equal worst defensive efficiency in the league so far this season. He will be predominately matched up with Towns who was ranked 46th out of 57 centres in defensive real plus-minus last season.

Karl-Anthony Towns ($17,070, DK $9,500) won’t draw the best matchup individually in this matchup with Davis being one of the top defensive bigs in the league by any measure. However he should still be considered due to the Wolves being in the second biggest pace up spot on the slate and the fact that he should receive a usage bump with Jimmy Butler no longer on the team (2.9% increase with Butler off the court this year).

Lamarcus Aldridge (DS $13,610, DK $8,300) is still significantly underpriced on Draftstars. He has gone for over 40 fantasy points in his last two games cleaning the glass with both Gasol and Gay both out of the lineup. The Phoenix Suns have conceded fourth most real points to centres so far this season.

Hassan Whiteside (DS $15,560, DK $8,400) has been entrenched in the lineup this season for Miami when he can stay out of foul trouble. He has averaged a massive 1.46 fantasy points per minute with an upside score of over 70 fantasy points already this season. He draws the best matchup in the league for centres on this slate with Brooklyn having conceded the most fantasy points to the position in the league this year, including giving up the most rebounds.