We have our work cut out for us on this NBA Thursday with a MEGA 13 GAME slate to attack. I might drown in the research before we get to the end of this article. The usual major DFS tournaments are on offer: 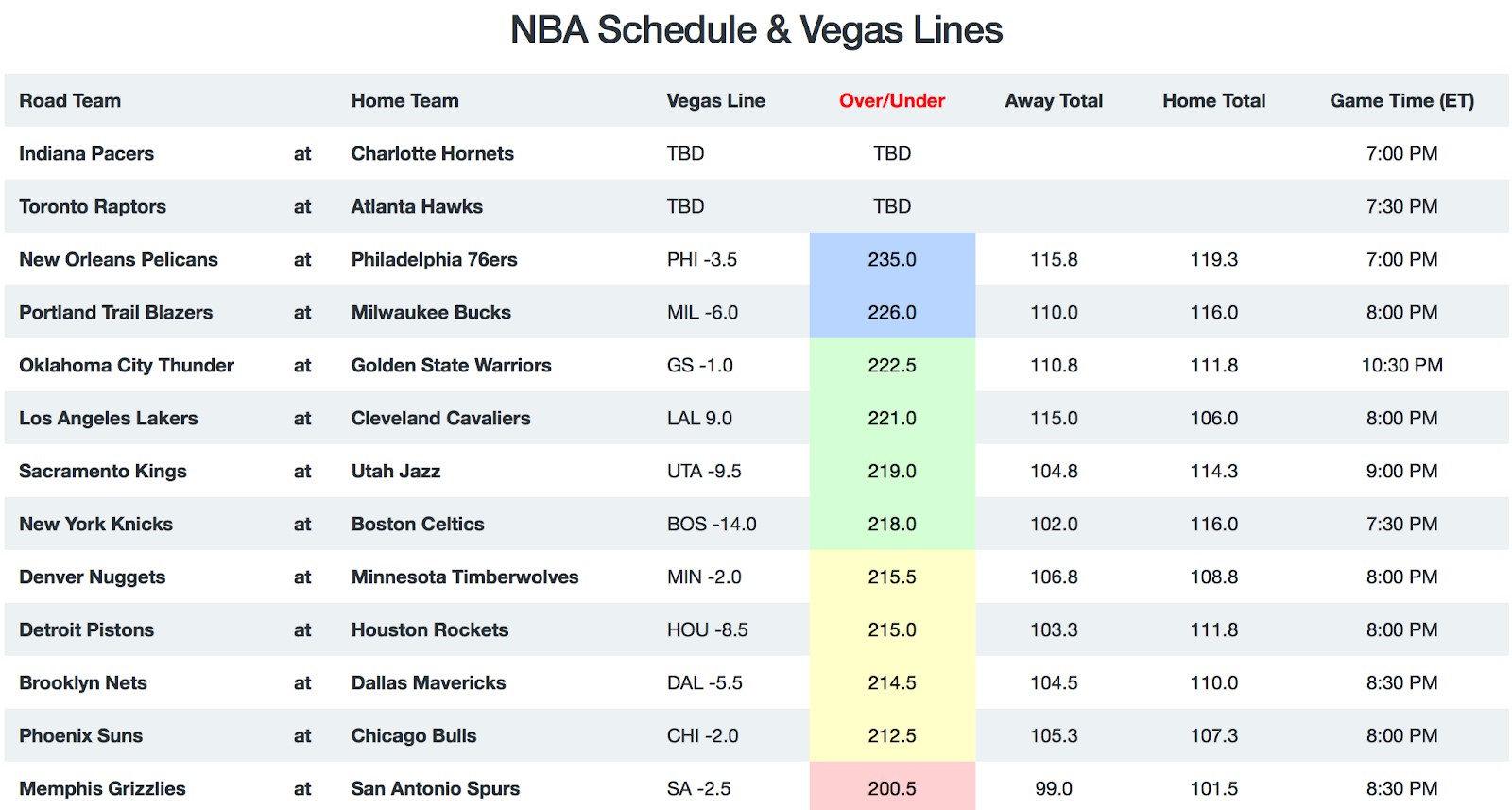 On a 13 game slate the New Orleans Pelicans vs Philadelphia 76ers game clearly stands out amongst the rest with a monster 235 point total. This will be a popular game to target with several stars on both sides, however it will also be a tricky game, particularly from the Sixers point of view as since the Butler trade rostering anyone but Joel Embiid has been a usage lottery.

There are three other games with a totals over 220, but it is worth noting the one of them in the Milwaukee Bucks vs Portland Trail Blazers is pitting two top 10 defenses against each other, while Oklahoma City are also a top 4 defense this year.

There are still two games without totals on this slate due to possibly injury news, of these two games I would expect the Toronto Raptors vs Atlanta Hawks matchup to have one of the highest totals on the slate, but also one of the biggest spreads.

The Raptors have the marquee matchup on the slate vs Atlanta who are playing the fastest pace in the league this season. As noted above however there is huge blow out potential in this game.

Utah have the second best pace up matchup in the league vs Sacramento but also have significant blow out potential with a -9.5 spread, however the Jazz have faiiled to live up to expectations while the Kings have exceeded all of theirs so this game might be closer than anticipated.

Philadelphia vs New Orleans looks to be the game of the night with both sides in a significant pace up spot but the game is expected to remain close throughout with a line of just 3.5. This should also be one of the most enjoyable games to watch.

As usual, remember it is early to be predicting the best value plays on the slate with lineups not being confirmed until closer to tip off.

Cedi Osman (DS $7,790, DK $4,300) notched up over 30 minutes in his last game, the most since returning from injury. He only managed 18.75 fantasy points which should help keep his ownership down on this slate. The Los Angeles Lakers defense has been improving recently but they still play at the fourth fastest pace in the league this year which should lead to plenty of opportunity for Cedi who has already shown 40+ point upside this season.

Bogdan Bogdanovic (DS $7,710, DK $4,100) doesn't have the most attractive matchup vs the Utah Jazz on this slate. However, he is still far too cheap on both platforms for a player that is projected to get around 25 minutes and has posted 0.97 fantasy points per minute so far this year.

Hamidou Diallo (DS $6,040, DK $3,400) started in his last game with Terrence Ferguson out. He didn't disappoint scoring 18 real points to finish with 25.75 fantasy points. He only played 22 minutes, however if no other value opens up and you are wanting to pay up for the top priced players on this slate he will be a solid option.

Donovan Mitchell (DS $12,520, DK $7,200) has been one of the biggest disappointments in the league this season. At times the toughest part about DFS can be thinking to yourself how many times can I bang my head against the wall and continue to play someone who is struggling with form. But I believe Mitchell is still too cheap, he continues to get over 30 minutes per game with a monsterous 28% usage rate. His issue has been shooting 41% from the field and just 29% from three. He has a great matchup on this slate vs the Sacramento Kings who are playing at the second fastest pace in the league.

Gary Harris (DS $10,560, DK $5,800) always makes for an attractive play when his price dips to this level. On this slate he takes on the Timberwolves who have given up the 4th most fantasy points to shooting guards in the league over their last ten games.

Spencer Dinwiddie (DS $10,630, DK $5,900) / D’Angelo Russell (DS $13,800, DK $7,200) have been the biggest beneficiaries of the Caris LeVert injury. Russell’s usage has skyrocketed as the primary ball handler with the starting unit now and he has put up over 46 fantasy points per game over his last 3 matches. Dinwiddie is locked in for around 30 minutes per night now and his usage has also risen with him leading the second unit.

A sneaky play on this slate would be to play these two together against the 6th most assists in the league to point guards this season.

Klay Thompson's (DS $12,090, DK $6,600) shot count has been through the roof with both Curry and Draymond out. Getting up over 24 shots in both of his last two games his price is too cheap for that amount of opportunity. There is no doubt that his shots are more difficult without the Warriors two best playmakers in the lineup, however he is too good a shooter to continue to shoot under 30% from three as he has over his last 3 games. Klay should be due for a shooting regression and explosion soon, you will want to be on him when it strikes.

Wendall Carter Jnr. (DS $10,140, DK $5,500) has hit a form slump not scoring over 30 fantasy points in his last 5 games. This slate will see a battle of the two rookies with Carter Jnr going up against Deandre Ayton. Centres around the league have been licking their chops when they see Ayton lining up against them with the Suns giving up the third most fantasy points to centres this season. This should be a great opportunity for Carter to hit his upside of 40 plus fantasy points returning significant value at this price point.

DeAndre Jordan (DS $12,930, DK $7,100) is close to my lock and load play of the night on this slate. Brooklyn have given up the most points in the league to centres by just under 3 points per game to second place this year. They concede the most rebounds in the league to the position, which is right in Jordan’s wheelhouse, while also giving up the most real points. Jordan is well priced to return value from a ceiling of 45-50 fantasy points.

Kawhi Leonard (DS $16,380, DK $9,500) is far too cheap on Draftstars, which is worth highlighting on this slate where he is matched up against the Atlanta Hawks who play at the fastest pace in the league and have given up the most points in the league to small forwards over the last 10 games.