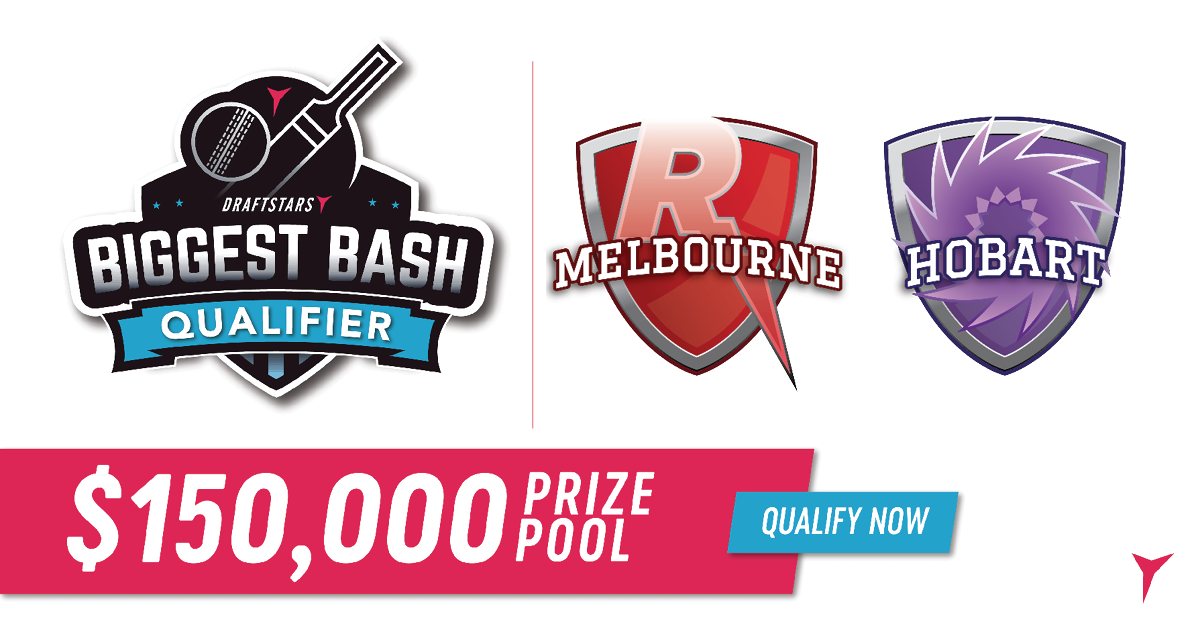 The rampaging Hobart Hurricanes roll into Marvel Stadium to take on the Melbourne Renegades in this Monday night’s BBL08 action. The Renegades have lost their past three after starting the season with a pair of wins and will be desperate to get things back on track here on their home deck. The Hurricanes have been the story of the tournament, remaining undefeated after five games, however they have had a run of home games and now see a tricky pitch for the first time this season.

Would you like to win a trip to Melbourne to play off for a $50k first prize at Club 23 at Crown Casino? You can do so for just $2 with the Draftstars “Biggest Bash” contest! Read our interview with Jason Knox aka “Knoxinator”, who proved you can win with just one $2 entry, or take a look at our chat with Shaun O’Neill aka “THE_BEARD” who won his way in after entering three lineups while at the pub!

Unfamiliar with some of the players in this game? We have full profiles on the squads of all eight Big Bash teams, so you can read up on the Melbourne Renegades or Hobart Hurricanes prior to building your lineups.

Marvel Stadium has been a total graveyard for batsmen in the two games there so far this season. The Renegades were able to chase down the Scorchers’ measly total of 103 with only 4 wickets in hand in the first game of the season, but were then restricted to 99 themselves when chasing the Sixers moderate total of 7/132 last game. It would be fair to expect similar conditions so angling your lineups towards the bowlers may prove to be a winning ploy.

Even at this price, can you go past D’arcy Short ($26,200)? The argument against him is he now gets onto a pitch which has favoured the bowlers heavily in two games this season and if he is to miss out with the bat he leaves a gaping hole in your lineup at this price. And while he has bowled 12 overs in his last four matches, taking four wickets, will he get that many on a pitch where the frontline bowlers may thrive? Valid concerns at this salary but he is in scintillating form and continues to put up big numbers – his lowest fantasy score in five matches is an incredible 85 – and if he hits around that 100 mark again it will be hard to win without him in your lineup.

Aaron Finch ($19,200) returns to captain the Renegades after a lean period opening the batting for the Test team. Finch has been superb across the past two seasons, averaging 33 with the bat at a mean strike rate of 151 – a level which provides the maximum strike rate bonus. Paying up for a pure batsman on this pitch is undoubtedly a risk, but if you are going to pay up for someone, why not make it the Australian T20 captain.

Daniel Christian ($14,900) often comes up against an old side and that is the case again here against the Hurricanes. His form has been middling of late after a good start to the season but he has still been chipping in with an over or two with the ball which is a handy fall back option for any batsman the way this pitch has been playing. Coming in down the order can also help to milk runs if early wickets fall so he looks one of the safer options in this salary bracket.

The Renegades pace bowlers have thoroughly enjoyed this pitch so far this season so Kane Richardson ($12,400), Usman Shinwari Khan ($14,600) and Jack Wildermuth (13,500) are all in play at reduced price points after below average performances at their past couple of games at the MCG and down at Geelong. In their last game here against the Sixers they scored 136, 68 and 94 fantasy points respectively so if the pitch is playing the same way again they all have considerable upside at their salaries. They present as better options than Cameron Boyce ($15,600) who is priced up after two very good games away from Marvel Stadium but he was wicketless in his two games here earlier in the season.

The Hurricanes bowlers will be giggling at the thought of playing here after battling on the road that is Blundstone Arena three times this season already. Jofra Archer ($15,300) has been below par in his past three games, averaging a tick under 25 fantasy points, but this could be a good opportunity to get him at lower ownership on a deck with much more to offer the fast men. Riley Meredith ($13,000) is another player who has struggled to score at Blundstone but racked up 117 points against the Scorchers in Launceston and hits the right areas to get something out of this pitch. Both hold appeal along with the consistent James Faulkner ($17,600) who is now priced up after a string of solid performances but will relish the seaming conditions and may be needed with the bat if the top order doesn’t adapt to a new situation.